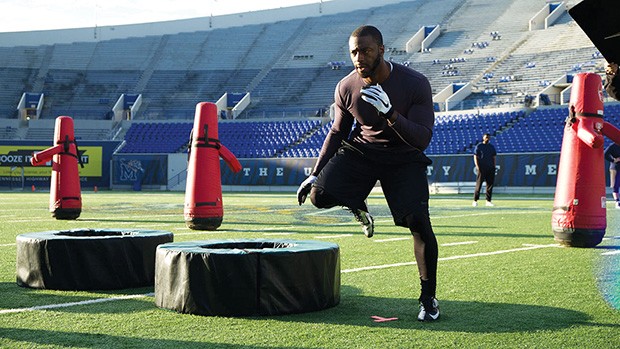 On July 8, 2002, fate threw 17-year-old Brain Banks a curveball that would alter his life forever.  Falsely accused of rape, he was arrested and ultimately brought to trial as an adult.  On faulty advice from his lawyer, he accepted a plea bargain that would result in his serving six years in jail, five years on probation and force him to register as a sex offender. Somehow, the teenager survived his stint in prison, yet only found frustration on the outside as his record prevented him from securing a decent job.  To make matters worse, before all of this the young man had a bright future as his skills on the football field had caught the eye of many a college and university coach.  A career in the NFL was not out of the question.

Tom Shadyac’s Brian Banks recounts this tragic tale and also delves into the title character’s efforts to exonerate himself, a David vs. Goliath tale if ever there was one. Sincere and heartfelt, the film ultimately serves as a commercial for the California Innocence Project, an organization run by attorney Justin Brooks that devotes itself to overturning wrongful convictions and freeing those serving prison terms that should never have been levied.  While the movie’s heart is in the right place, Shadyac’s heavy-handed approach sometimes does the story a disservice, underscoring moments that ultimately leave an insincere taste in the viewer’s mouth.

Rendered in flashback, the film is told from Banks’ point of view. As the beleaguered young man, Aldis Hodge brings a sincerity to the role that’s commendable, though there are moments when I wish he’d had employed a bit more subtlety in key moments. Greg Kinnear provides a solid turn as Brooks, cautioning Banks throughout not to get his hopes up as their efforts to overturn his sentence is the longest of long shots, rallying the young man when necessary, bringing him down to earth when needed.  It’s the sort of understated performance that’s often overlooked, and the actor brings his A-game during a tense moment late in the movie when he confronts Banks’ accuser.

The screenplay by Doug Atchison is straightforward to a fault.  While it dutifully lays out Banks’ tale, including a love story that blossoms between him and a budding artist (Melanie Liburd), there are some holes in the script that need addressing.  Most glaring is the character Mick Randolph (Dorian Missick), Banks’ parole officer who seems to be inordinately cruel to our hero for no apparent reason.  His efforts to block his charge’s efforts occur at convenient times where the narrative is concerned and seem contrived, as does his change of heart toward the end. His purpose in the film seems disingenuous and undermines the conviction of it as a whole.

Equally troubling is Shadyac’s use of music to accentuate Banks’ plight -- obvious, unnecessary songs that pander to the audience, making sure they understand just how inspirational all of this is supposed to be.  It’s a bit insulting, while a couple of key questions emerge about Banks’ original trial that are troubling, but go unanswered.

The film has been made with the best of intentions and during the end credits we get a rundown of the many successes Brooks and his institute have had.  It is commendable work that needs to be promoted and encouraged, which is the purpose of Brian Banks.  I just wish it had been done with a more deft hand.