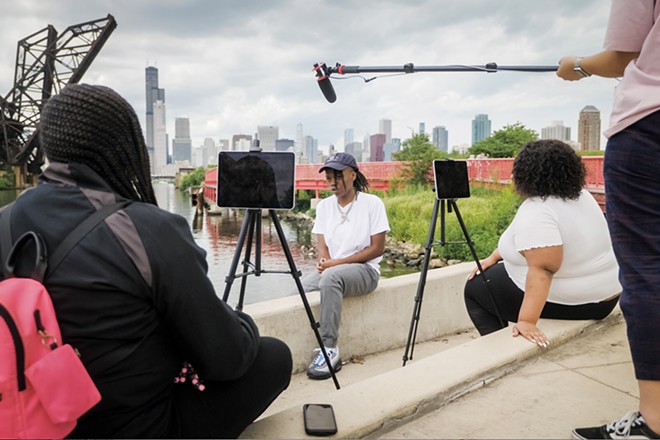 Naomi Getachew, a 13-year-old from Normal, recently made a short film inspired by the Black Lives Matter movement. "To bring change you must not be afraid," Getachew told Illinois Times about her efforts. While considering racism and protests that have happened in the last year, Getachew entered the "No Malice" film contest to show that "we may have our differences, but we belong to one human race." Her film is about racial tensions between a white theater teacher, a group of Black students and a Black educator they confide in. At the crux of Naomi's film is a lesson of empathy.

Project coordinators at the Abraham Lincoln Presidential Library and Museum (ALPLM) in Springfield organized the No Malice short film contest with funding from the state's Healing Illinois initiative. "In working with educators and our community this year, it has become clear that youth and young adults need a venue to express confusion, outrage and fear about the racial inequalities they see and experience," said Heather Nice, education director at ALPLM. The contest encourages youth to share their feelings and beliefs, "particularly during the pandemic when they are isolated and have lost access to their typical social supports," Nice said.

The contest is open to those ages 11-21 and participants are encouraged to submit short films about racial healing. With the $32,000 Healing Illinois grant, ALPLM is awarding cash prizes for films chosen in first, second and third place from different age groups.

Ivan Delgado, a 20-year-old from the south side of Chicago, submitted a music video he helped create last year. Delgado directed and wrote the screenplay for the music video, Don't Shoot at Me, which features original music by two of Delgado's peers who perform in the video.

Delgado said there have been serious challenges leading up to him becoming a filmmaker. Making the music video is "a big deal" to Delgado and his friends. He said they grew up in a neighborhood impacted by gun violence. Delgado said he will continue to work with aspiring artists in the greater Chicago area. "We do it to lift each other up," he said.

ALPLM hosted six film experts to give virtual presentations as part of the No Malice contest. That included Liliane Calfee, a media professor at DePaul University in Chicago and coordinator of a youth film program. During Calfee's presentation on April 8, she covered the technical basics of film – lighting, editing and working with sources. She also explained how to find royalty-free music and programs for animated short films.

In 2016, Calfee and the DePaul film program established a partnership with the Chicago Housing Authority to help introduce film to youth from low-income areas. The program underwent a complete overhaul of curriculum and design, so Calfee offered pages of online and remote resources for aspiring film artists and directors during her presentation. "We had to, because of the pandemic, strip everything down and ask what these students had remote access to," Calfee told Illinois Times. Calfee said stripping the program back to the basics led to designing a learning model that students can use to bypass funding and equipment barriers.

Calfee said the most impactful stories and films come when students write from "what they know," and produce authentic work. The program she manages at DePaul pays youth for the work they put into producing films and visual content, so she supports the financial incentives of ALPLM's film contest. "There's a huge movement to get youth on paths to financial independence and stability," said Calfee.

Heather Nice said ALPLM hopes "the contest fosters a creative outlet for them to engage in difficult conversations." Educators will be encouraged to use the films and panels as springboards for discourse. The organization decided to limit the contest to youth and young adults, with hopes to "to maintain a 'peers talking to peers' aspect for the curriculum" – something the ALPLM believes is critically important but difficult to foster during the pandemic, said Nice. Contestants have until May 31 to submit films and first-place winners will receive a $2,000 prize. More information can be found at tinyurl.com/4hh4yy5b.