Springfield professor's project on a less explored form of discrimination 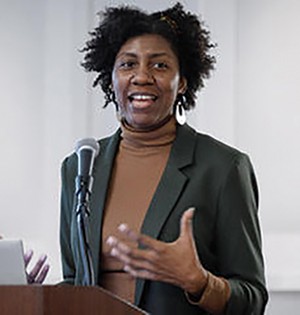 Colorism is a term coined in the 1980s by Pulitzer Prize-winning author Alice Walker. In her book, In Search of our Mothers' Gardens, Walker wrote that colorism is "prejudicial or preferential treatment of same-race people based solely on their color." It's something that sociologists have noted across the globe, across various races. It's a driving force behind "beauty" products such as skin bleach. And, as people like Sarah Webb argue, without efforts to dismantle it, the fight against racism can't be won.

Webb is a professor of English at University of Illinois Springfield. In 2013 she started a project called Colorism Healing as a way to educate, with a focus on communal healing and change. Anyone who was raised in Western society is "likely to have an implicit bias that favors lighter skin or white features," said Webb. Some may knowingly harbor these biases – but many people may not realize they internalize negative feelings about dark skin and features such as textured hair. Webb said while many people live without exploring or acknowledging these thoughts, "It is our responsibility to change it once we become aware of it."

Colorism has consequences. As an example, Webb pointed to a 2013 study titled The Relationship Between Skin Tone and School Suspension for African Americans. The study's authors found that, "The odds of suspension were about three times greater for young African American women with the darkest skin tone compared to those with the lightest skin."

Webb said it wasn't until she was older that she had the language to express how colorism showed up in her own life. "When I was five, some extended relatives, some great aunts, were complimenting my sister and saying how she's going be a heart-breaker someday. But they weren't paying any attention to me. They weren't complimenting me at all." As her mom recounted later, even as a five-year-old child, Webb connected the dots that her sister was getting more positive attention for having lighter skin. Around 2011, Webb saw the documentary Dark Girls, which features Black women talking about how colorism has affected their lives and self-esteem. "That documentary started to give me courage to put language to my experiences," said Webb.

Colorism Healing is a multifaceted project in which Webb facilitates dialogue and encourages people to explore how colorism has shown itself in their own lives. She is active on social media and does a weekly virtual question and answer session, sometimes featuring guest speakers. She is regularly invited to speak about the topic. She'll be doing a Ted Talk hosted by UIS in March, for instance.

Her website includes resources and blog posts, such as a recent entry about Black historical icons and what they have to say about colorism. Webb has a multimedia approach to her work, so the entry includes memes and a video in addition to writing. Webb said Black History Month is a good time to question who we celebrate and why. "Are we only elevating or lifting up figures in Black history who are a certain type of Black person, either because of their skin tone, or because of their social class, or some other form of privilege that they might have?"

Webb has begun a yearly anthology of writing submissions she collects through the International Colorism Healing Writing Contest, which serves to raise awareness and provide an outlet for expression. Writers can submit poems, essays and stories. Submissions for 2021 are being accepted through April. Students at UIS help her put together the self-published book that results from submissions.

Webb's work is aimed at breaking the cycle of discrimination. She said while formal lessons about history need to be more inclusive, "a lot of our attitudes and beliefs are shaped outside of school, in the home." Individuals can reckon with their own biases. One way Webb suggests doing so is taking an online test from Harvard about implicit bias – also referred to as unconscious bias – regarding race.

Grappling with the way we see the world and how it shapes our thoughts is a key to dismantling the myth that whiteness is superior, said Webb. "If we don't address colorism, it doesn't matter how much progress we make, in terms of racism. We are going to still have that division based on how people look."

Find more about the writing contest and other facets of the project at colorismhealing.com. Follow Colorism Healing on Instagram @colorismhealing and at facebook.com/colorismhealing. Harvard's implicit bias tests can be found at tinyurl.com/4rf4msdb.