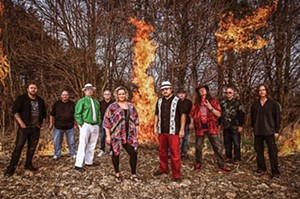 Always a big night for music, Halloween weekend 2015 seems extra special as All Hallow’s Eve lands on a Saturday. There will be plenty of parties, costumes, prizes, music and merrymaking in the most frightful of ways.

Before Halloweening begins we have a celebration to attend to, as one of our most respected, talented and long-running bands lays down the groove one last time. The final performance and reunion of the Screamin Vatos happens on Friday at the Curve Inn from 6 to 10 p.m. The band began in 1993 when Billy Bacon conceived of a music combo built on a foundation of Latin percussion capable of doing justice to Santana classics and songs by War. From those beginnings the group came to be a consistent performer at fairs, festivals and every bar around that had a stage large enough to hold them, becoming a standard crowd pleaser playing songs other bands didn’t, in a way no one else could.

Many a musician passed through the ensemble, changing the sound somewhat with individual styles, but Billy and the boys always kept that base of percussion for continuity and out-of-this-world grooves. Current members include, Albert Capati, Liz Buttell, Kenny Young, Larry Harness, Ed Halerewicz, Ed Boyd, Don Udey, Bill Cope, Dewayne Ellis and Chad Siebert. Former members (half the musicians in town) are invited to join in the celebration. Here’s a note that the band is not retiring, just the Screamin Vatos name – so keep your eyes and ears open for more music from this group.

A quick review of the Pub Crawl listings this week reveals a big bunch of Halloween happenings on Friday, so let’s start there. Those moon monsters in Deep Lunar Blue shine on at the Trail’s End Saloon in Curran while haunted Hipbone Sam horrifies at Casey’s Pub, both with advertised Halloween jams. Big Daddy Jasper scares the dickens out at the Long Bridge Golf Course Clubhouse and Black Queen terrorizes all who dare to enter the Third Base Sports Bar. Further frightening figures appear at Black Sheep Cafe’s HISO Halloween Bash featuring several alarming bands to distress you with dread, while Joe “the Feared” Frew shocks and shakes the show at Always After Five. The Roastineers twitch and bewitch at Craft Beer Bar, and The Station and Dog of Panic torture and taunt at Crow’s Mill Pub.

On Saturday, Halloween proper, Off the Wall wails and whines at the Blue Grouch with a special addition of the band’s two year anniversary celebration. Costumes are expected and cash prizes awarded. Elvis Himselvis comes already in costume (yes, Rick is being Elvis Presley for Halloween again) for a night of bedevilment at the Brewhaus, while 2nd Chance Band gets “spooktacular” at Mama Lee’s Sandbar. Gravely, GirlBilly goes bonkers at Weebles, and Brushville with The Robbie Mitchell Band trick and treat at Boondocks. There are lots more shindigs going on, but I’m running out of room and words of un-endearment.

The venerable Brewhaus led the way for the revitalizing of legitimate downtown nightlife when it opened in October of 1994 as a groundbreaking bar and restaurant. Now the Brewhaus is legally old enough to drink. Please come join us in celebrating 21 years in business on Sunday, Nov. 1, as I host a live music jam. Congratulations to Denny Polk and Mike Parkes plus Keith Voegele, Wally Beck and all the others who helped make Brewhaus the place to be for so many years.

Congratulations to all who won the Best of Springfield awards. I do like to point out that we are all winners in having a spectacular music scene right here in our fair city.