My hair's getting really good in the back.

Now that I'm immune – the second shot kicked in full force last weekend – I wonder what I should do.

Are buffets safe? Are any left? Was I better off without all-you-can-eat fried chicken at the VFW and bottomless blue cheese dressing at the Hy-Vee salad bar? Probably, but no matter. Life, or its demise, is built from little things, cholesterol and saturated fat included.

Speaking of buffets, toilet paper shortages seem eons ago. Covidiots without masks don't bother me as much. It's too soon to know anything for sure, but maybe a thrice-postponed flight to visit folks on the West Coast will come true at the end of May. The Summer Camp music festival in Chillicothe, a Memorial Day weekend tradition canceled last year, is on for August. No word about redneck fishing in Bath, but school crossing guards are out again.

Ronald Reagan was wrong about a lot of things, but, just maybe, it's morning in America.

We will know soon enough. A different stripe conservative than The Gipper, I haven't had a haircut in more than a year. Barbers, I've figured, can spread germs as easily as anyone else, and since I don't work in a widget factory where locks caught in machinery spell Scalp-O-Matic, I've favored a prudent course. If you squint just so after drinking too much, I look just like David Cassidy! But maybe for not much longer. 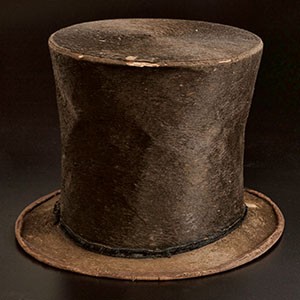 Hat trick: The private foundation that bought a troubled chapeau now is in charge of efforts to determine whether it's fake.

GETTING PICKY: Tired of waiting for code enforcement to crack down on the neighbor whose garage overflows? Call American Pickers, the made-for-TV salvage operation whose stars hail from Iowa and crisscross the nation looking for what they call rusty gold, which can look a lot like junk, and they're coming to Springfield and environs next month. Both sides can get lucky: I watched them pay too much for a beat-up Motobecane 10-speed a few years ago, proving there's a picker born every minute. Call 1-855-OLD-RUST if you think you have what it takes to be on the History Channel.

NDA'S AT THE ALPM: The private foundation that bought the disgraced stovepipe that the Abraham Lincoln Presidential Library and Museum won't display because lots of people think it's fake is paying for experts to examine the troubled artifact. The cost of experts, estimated at $6,000, was supposed to have been evenly split with the public institution, but plans have changed, ALPLM board member Dan Monroe told colleagues during a St. Patrick's Day board meeting. Now, experts selected from finalists picked by the museum will examine the hat and be paid by the foundation after signing non-disclosure agreements. "This is to protect them from inquiries while they're doing the work, as explained to me by (foundation executive director) Erin Mast," Monroe said. After receiving the experts' report, the foundation will release it and hold a press conference, effectively putting the foundation in charge of the provenance probe. "They are driving the bus now," Monroe told fellow trustees. "I'm relying on Erin Mast's professionalism. I had a long conversation with her about this, and she assured me it will be professionally conducted and that the results will be publicly announced at the press conference."

Meanwhile, the ALPLM and its foundation have been negotiating renewal of a memorandum of understanding that outlines who controls the gift shop, concessions and artifacts as well as who applies for grants – it's now the foundation – to fund such endeavors as the Papers of Abraham Lincoln project, which puts historic documents online. ALPLM trustee Joan Brodsky told colleagues that she wants to see the foundation's tax returns. "Until we get the (returns) from the foundation, we can't agree on the MOU at all," said Brodsky, who also sits on the foundation board. "Do we realize that we pay the foundation head $100,000 more than (ALPLM director Christina Schutt)? Do we realize what's been happening over the years? Before we do an MOU, there's a lot of paperwork that needs to be understood."

Nick Kalm, foundation spokesman, said that the foundation's most recent tax returns for the year ending last June were given to the ALPLM in February. The memorandum of understanding was due to expire yesterday, but Kalm said the ALPLM and its foundation can continue doing business with each other, at least in the short term, absent an agreement. Reached by telephone, Brodsky declined comment beyond what she said at the board meeting. "All I could do is get into trouble by discussing this with you," she said.