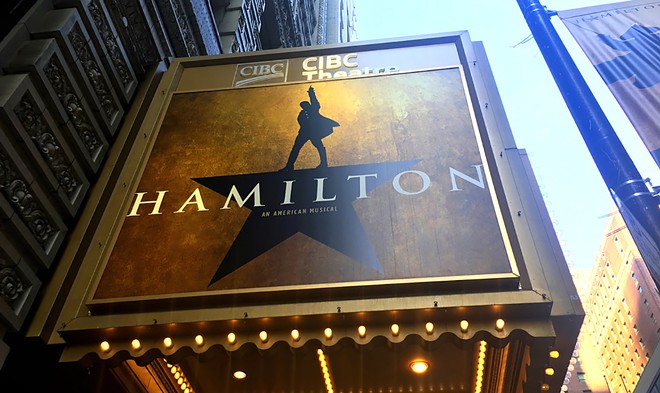 I may be years behind on the craze over Hamilton: An American Musical. But, when I finally did see it, it certainly left an impression. Mostly, I found it jarring in a way that continues to burn for me.

I do love musical theater and films, so I also hold the same takeaways as do most fans of the play. Gorgeous and playful and irreverent, asynchronous in the best possible ways, the songs are incredibly potent, the lyrics astoundingly clever, the characters complex and (almost) always humanized, and the performances unbelievably masterful. Perhaps most striking is that, by breaking from historically literal character-by-character race representations, the casting choices highlight a refreshingly critical statement about the true diversity of our American story's myriad contributors, both past and present, visible and invisible.

However, viewed through a lens of feminism and, in particular, maternal anti-violence politics, the story is surprisingly bereft for an otherwise remarkably humanistic work. Despite that each female character is justified as being either a fantasy object, plaything of, or martyr to the self-important male hero, somehow I have an even larger concern. The entirely legal shooting death of Alexander and Eliza Hamilton's precious son, Philip, is a devastating reminder that America's hypermasculine gun culture and policies are deeply foundational. From the nation's very conception, these increasingly allow our children to be murdered with casual, brutal frequency. As a result, both the prevailing American narrative and that of the play simply treat this condition as a sadly inevitable fact of life and society, instead of the outrageous, intolerable injustice that it is.

I am going to be blunt: From a love's labor perspective, Philip was barely even domestically absent Alexander's to lose. Mirroring a timeless, unfathomably vast number of mothers and their infinite caring labors, we see that which Eliza pours her entire being into creating, nurturing, protecting and educating, male "civilization" sickly, arrogantly claim as its right to destroy.

On the contrary, this country's gun violence is not a helpless inevitability, its gun laws not unquestionably holy, nor the politicians who uphold them our existential authorities. The Constitution does not promise unregulated gun rights. If it did, then it would be our moral duty to stand against the Constitution today. Neither Eliza Hamilton nor any of the communities' women, mothers, laborers, poor, nor slaves, participated in constitutional framing. Similarly grossly absent from U.S. policymaking in the centuries since are women, mothers, grandmothers and people of color, much less medical experts, mental health professionals, social workers, early childhood experts, teachers, psychologists, theologians, historians... Our governing bodies have never been nearly diverse nor multidisciplinary enough to claim the legitimacy of their conclusions in such grave matters.

Ultimately, Americans need to keep in mind that legality has never equaled morality until dedicated activists have forced a reckoning between the two. And we don't have to wait for it.

Amid my ambivalence and angst about Hamilton, I am able to settle on an encouraging note. As surreal and foreign as the play's portrayals of once-commonplace public gun duels now seem to modern observers, so will today's primitive, nonsensical gun laws and the tolls they exact in innocent lives eventually seem to our children's children.... If we just refuse to be satisfied. That would be enough.

History has its eyes on us, indeed.

Sarah Eccles is a master's-level educator, mother and foster parent in Springfield.

What do we mean by the "common good"?