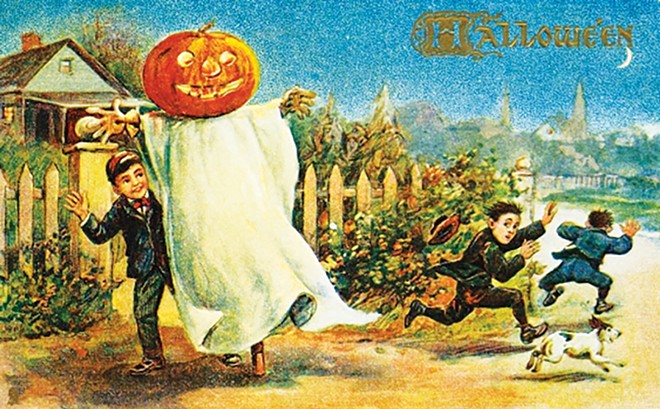 A Halloween greeting card from 1910, showing a young boy playing a prank on trick or treaters.

Today, Halloween is a mixture of revelry, as both trick-or-treaters and adults are in costume with happy pumpkins, and ghoulish skeletons for décor. A century ago, the holiday was more sinister – and violent.

Halloweens of the late 1800s and early 1900s were dominated by "pranks" that were closer to felonies and misdemeanors. Vandalism ruled the night as property was damaged and people were beaten.

The Halloween parades of today were unheard of then, as the first was held in Allentown, Pennsylvania in 1905. In 1921, Anoka, Minnesota, sponsored the first citywide Halloween party. By then, Halloween celebrations were tamer, and more inclusive.

Early Halloweens in the U.S. were often marked by Irish immigrants as an evolution of All Saints Day. Lively social parties were common, as were pumpkin carvings, bobbing for apples, and trick-or-treating. But there also was a dark side, as ghosts and goblins came out at night, usually with bad intentions.

In some areas, the situation was so dire that law enforcement published notices in local papers, warning of the consequences of bad behavior.

A 1908 notice in Alton, Illinois, advised that "all persons caught or known to have committed any depredations will be prosecuted...special officers (will) be sworn in...to watch boys and others disposed to injure private property."

In one part of Alton in 1905, "a number of gates were torn off and wagons carted away from their owners." Those pranks were tepid compared to others in town. At one home that year, a fire hydrant was "turned on in the front yard for several minutes, causing the entire place to be flooded."

At one public school in Alton in 1901, the janitor "stayed in the school building to look after things," but the situation turned violent when one male student "struck (him) on the side of the head with a slung shot," a weight on a flexible handle. Assault and battery charges were later filed against the student.

In the Macoupin County town of Gillespie, Illinois, in 1926, the local paper reported that four boys were arrested and taken to the police magistrate "for shooting Halloween stunts out of season."

Sometimes, the pranks turned costly. In Belton, Texas, in 1908, a prank by "Halloween roysterers" was blamed for a fire that destroyed the town's cotton compress and 10,000 bales. Damage was estimated at $250,000 – around $6.5 million in today's dollars.

It was still better than elsewhere at Halloween. In 1904, a New Jersey man, "angered by his own children and a party of their friends...drew a revolver and fired three shots," killing a 14-year-old boy. That night, a 27-year-old man in Michigan was killed and seven were wounded after "shot wounds...received during a Halloween lark."

Also in 1904, a 16-year-old Ohio youth was "accidentally shot through the head...while engaged in Halloween pranks," while a fight led to a young man's death by gunfire "during the Halloween celebration" in Greensburg, Pennsylvania.

The violence led some cities to abolish Halloween celebrations, which eventually made their way back into national customs with the kinder, gentler revelry we know today.