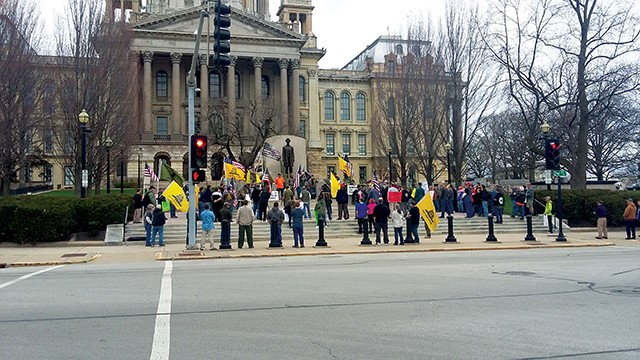 I spent nearly two hours watching last weekend’s gun rally on the Capitol steps and walked away disturbed and buoyant.

The good news is, they didn’t get nearly as many folks as hoped, predicted or feared. The daily rag put the number at 100, which seemed about right, and they came from all over the state to wave “Don’t Tread On Me” flags and act like homemade militias aren’t weird. National organizers who set up events in more than 40 states had told the media they were hoping 1 million gun aficionados would to flock to capitals throughout the land to show support for the Second Amendment. Judging by a report on Fox News, one of the largest gatherings was in Maine, where 800 people showed up.

In Springfield, they were mostly male and white, decked out in garb ranging from camouflage to hoodies, some clutching signs demanding the abolition of FOID cards and vowing violence should anyone come for their precious pistols. What better way to show the rest of us that you’re safe and sane?

Local gun activist Tom Shafer was the master of ceremonies. “My guns have never harmed anyone and they never will,” he declared. Then again, Shafer had his guns taken away for a year after he shot a Labrador retriever in 1997 and was convicted of aggravated cruelty to animals (the coup de grace, according to the mutt’s owner, came when Shafer put the barrel in the wounded dog’s mouth and pulled the trigger). There also was the incident in 1989, when witnesses said that Shafer pulled a gun on two men with a dog in Lincoln Park. Shafer denied doing it, although he did admit telling the dog’s handler that he had a shotgun in his truck. “If you don’t put the dog away, you’re about to have an ex-dog,” Shafer acknowledged saying. He was acquitted of unlawful use of a weapon charges, but the run-in helped cost him his job as a captain with the Springfield Fire Department.

One after another, Shafer summoned folks to the microphone to talk about personal experiences with guns. It came off as a series of confessionals, the sort of thing you’d expect at a 12-step meeting where the afflicted talk about descents into hell that began innocently enough, except in this case, .22-caliber rifles used for target practice replaced dime bags of bad reefer as the gateway drug. What started out as plinking at cans with Dad or Grandpa morphed into a passion, speakers said, with none seeing any qualitative difference between shooting at squirrels in the woods and toting whatever sort of gun strikes their fancy in neighborhoods where lots of people live.

No one said “wait a second” when a speaker uttered the words “Jewish-controlled media,” then told the gathered horde that we have racial tensions in the United States, so genocide can happen here, and guns make for a civil society. He got as much applause as anyone else, but not as much as Donald Trump, who was cheered in absentia.

With the legislature considering a bill to ban magazines holding more than 10 rounds, folks were worked up about how many cartridges should be allowed in clips that feed ammunition to firearms that can be used to put holes in targets at the local shooting range or holes in children at the local school. Everyone seemed to agree that the proper limit is no limit.

I was thinking of a recent murder trial in Springfield, where the killer used a pistol equipped with a 30-round magazine. I hadn’t known that such a thing existed, so I checked out YouTube, where a guy who likes guns acknowledges that there is no real-world use for a handgun with a 30-round clip. Too big to put in your pocket and too unwieldy for a holster, where it will stick out from your waist, jab everything around you and look horrible. “The public will definitely freak out if they see something like that,” he advises before explaining that such clips allow target shooters to keep firing without breaking concentration. That, apparently, is why you – or someone with more sinister desires – can buy a 30-round clip on the internet for less than $20.

I’d been to gun rallies before Saturday’s event, and they haven’t changed much, near as I can tell. Always lots of flags, always applause for veterans and police from crowds that bask in self-professed patriotism deemed a natural byproduct of loving guns. But there is hope.

For one thing, flags of the Three Percent movement were much in evidence. The group takes its name from the discredited notion that just 3 percent of colonists fought against the British during the Revolutionary War. Today’s Three Percenters say they’re out to preserve the Constitution and the Second Amendment, and, depending on which website you visit, they vow no first use of force and/or targeting of innocents. It is good to know that just 3 percent of the population thinks like this. Widespread media coverage here and elsewhere notwithstanding, the lack of counter-demonstrators also was refreshing. The best way to deal with fringe groups is to ignore them.

But the surest sign of hope is on Amazon, where the price of “Repeal The Second Amendment” t-shirts, rare just a few months ago, has dropped from $40 to $15, with a plethora of designs available. Buy one. The life you save may be your own.