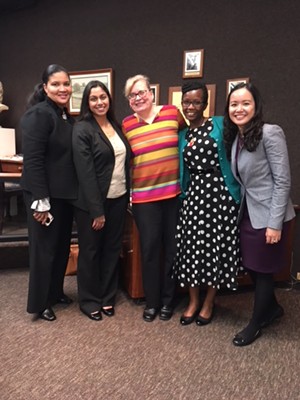 Last week three doctors presented to a crowded room at the Hoogland Center for the Arts in Springfield about measles. What was subtly remarkable was the makeup of the panel. All three doctors also happened to be women of color.


"It's refreshing to be able to serve on a panel of women on a topic that's not necessarily about women in medicine," said Dr. Vidhya Prakash.

Prakash is an associate professor at Southern Illinois University School of Medicine in Springfield, where she teaches about infectious diseases. She also founded and directs the university's Alliance for Women in Medicine and Science (AWIMS), which takes aim at gender discrimination and harassment in those fields, which experts say is widespread.


According to a report released by the National Academies of Sciences, Engineering, and Medicine in 2018, gender discrimination affects significant numbers of women in STEM fields, and those in academic medicine especially face harassment by faculty and staff.

Kathryn Clancy, a professor at the University of Illinois at Urbana-Champaign, co-authored that report. She said one major finding was that rates of gender harassment are higher and more pervasive than sexual harassment. That means more focus should be put on preventing and addressing actions like mocking and put-downs, behaviors that are harmful though not always sexual in nature. "What we really need is culture change and leadership," said Clancy.


At SIU School of Medicine, the women's alliance is aiming to help shift the culture in its own community. It had grass-roots beginnings in 2015. Prakash was inspired when an advisee came into her office one day in tears. "She was overwhelmed as a young mother," Prakash said. "She had just come back to work from maternity leave (and) was functioning as a single parent because her husband was out of state completing training or work elsewhere. And she was ready to quit."


Prakash, herself a mother of two young boys, knew that she wanted to help create an inclusive environment where women felt welcomed and empowered regardless of their duties at home. So she invited faculty and advisees in her department over for brunch. The first meeting had 15 people or so. It was reminiscent of "consciousness-raising" groups associated with the second wave of feminism, beginning in the 1960s. One of the often-explored topics was women in the workplace.


Like then, the women in Prakash's home discussed their careers. Prakash said that first meeting was "a very honest, raw discussion about some of the struggles that women in medicine and science face, including work/life integration, societal pressures and expectations that are often unreasonable." Prakash said the support group was cathartic.


Since then, the effort has grown in size and mission. Last year, AWIMS became part of the university's Office of Equity Diversity and Inclusion.


An executive committee oversees five different initiatives, including education, research and wellness. There's also a focus on community engagement. AWIMS has participated in Habitat for Humanity of Sangamon County's "1,000 Women Strong" program which brings women together to build homes for families in need.

Educational panels have been well received, said Prakash. As exemplified by the panel she recently served on to inform the public about measles, there is a concerted effort to avoid "manels" – panels composed completely of men. Ideally panels, like the rest of the field, will be inclusive.


"You cannot have a successful women in medicine and science movement without the men. You have to have men at the table. You have to have them be a part of the solution," said Prakash. She notes that issues of discrimination are often compounded for non-binary people and others in the LGBTQ community as well as women of color.


During the panel on measles, Prakash emphasized a people-centered approach, meeting people where they are and educating them from the ground up. It's a similar methodology she's using with AWIMS. "We heard the stories firsthand, and therefore we had a much better understanding of what the issues were as we took it to the schoolwide level," said Prakash.


Dr. Wendi Wills El-Amin heads the Office of Equity Diversity and Inclusion at SIU School of Medicine and agrees the grass-roots origins of AWIMS sets it apart. "We've recently reached (gender) parity among our medical students, but we have not reached parity among leadership and active physicians," said El-Amin. "So there's a lot of work for us to do."