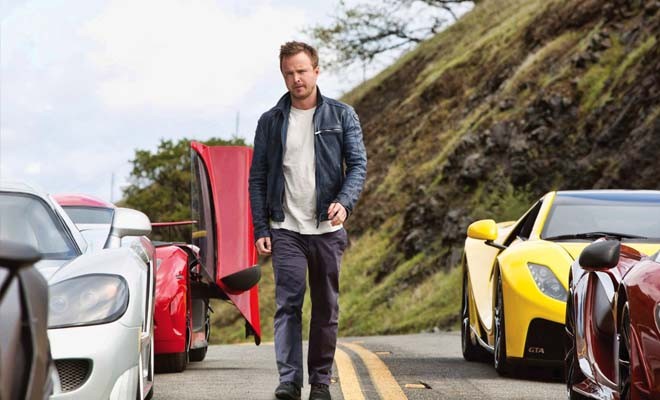 The actor stars as Tobey Marshall, a grease monkey with a custom car shop of his own, left to him by his father, that’s on the verge of collapse. He loves what he does, as well as the crew he’s assembled, but the work that comes in, as well as whatever he can pick up winning illegal road races, simply doesn’t pay the bills. However, an offer he can’t refuse walks through his door one day in the form of Dino Brewster (Dominic Cooper, looking every bit the bad guy), an old rival who’s gotten away with Marshall’s girlfriend, Anita (Dakota Johnson). He needs a rare Mustang customized to the tune of $250,000, a job the crew jumps at, thus feeding their passion and saving their friend’s business at the same time.

However, this transaction is not the last bit of business that Marshall and Brewster engage in. They have a throwdown on the road between themselves and Little Pete (Harrison Gilbertson), Anita’s brother. He ends up dead, due to Brewster’s dastardly doings on the road, while Marshall ends up taking the blame and doing two years on a manslaughter charge, only to come out looking for a bit of revenge and redemption.

He finds his opportunity in the DeLeon, a high-speed road race that takes place on the highways and byways of California, organized by Monarch (Michael Keaton), a mysterious moneyed maniac who lives vicariously through the drivers. Marshall, Brewster and a handful of others, duel to near death in their sleek, road-hugging machines, causing all sorts of glorious looking wrecks in the process. They race more for pride than the pink slips of the autos they use that are on the line.

To be sure, this is the silliest of premises but for what it is, there’s no denying that it’s done exceptionally well. Waugh, a former stuntman helming only his second film (Act of Valor was the first), takes an old school approach that helps distance it from the Fast and Furious franchise. All of the racing was actually executed on the road. No computer-generated effects were employed. You won’t see the cars here doing anything that a car can’t do and the difference is palpable. Using inventive camera placement and an editing rhythm that adopts a rapid tempo but doesn’t distract us from the action, Waugh fashions an old-fashioned car film using modern cinematic technology that roars off the screen.

Obviously, a movie like this can’t survive on muscle cars alone, and while the revenge plot that’s used is as hoary as a threadbare rug, the cast is committed to it in such a way that we don’t mind knowing right where it’s headed. Paul is as solid as we’ve come to expect him to be from Breaking Bad, bringing sympathy to the stereotype he’s saddled with, as well as a bit of charm. His co-star, Imogen Poots, as his shotgun co-pilot Julia during their cross-country trek in order to get to the DeLeon, is feisty and not just a piece of eye candy. Her quick wit plays well off Paul’s quiet demeanor and the many scenes they share are so good that we don’t mind that we’re taking a breather from the constant action. Scott Mescudi, Rami Malek and Ramon Rodriguez as Marshall’s crew, all get their comedic moment in the spotlight which they take advantage of to great effect. As for Keaton, he’s so manic here that you can’t help but think you’re watching a middle-aged Beetlejuice, which isn’t necessarily a bad thing.

Speed is designed to thrill, as well as launch a franchise with Paul at the center. Whether two speed-based series can survive at the box office remains to be seen. However, with the exception of Fast 5, Speed is superior in almost every way, primarily because of Paul’s ability to ground the movie and Waugh’s dedication to filming this adventure in a way that does not insult our intelligence, yet delivers the thrills audiences demand.