Grocery shopping during the pandemic 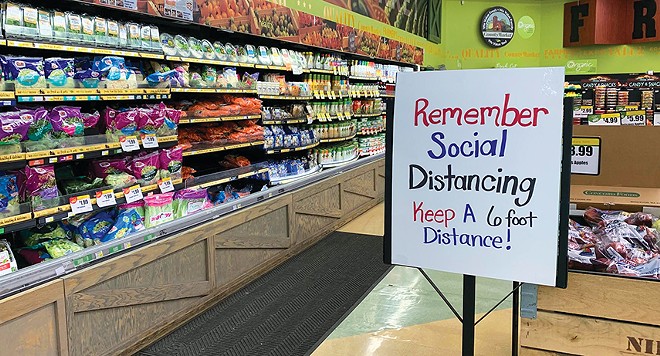 At the entrance to the County Market on Monroe Street, an employee is wiping down carts with a bleach solution. He said he usually works in the deli – which is temporarily closed – and is now sanitizing carts.

"They're (sanitizing them) so the customer sees – they just did this. So it's another source of comfort for the customer," said Gerry Kettler, director of consumer affairs for Quincy-based Niemann Foods, which owns more than 30 County Markets in Illinois.

Grocery shopping is one reason Illinoisans can leave the house under the governor's stay-at-home order. But even that trip must be approached with caution to avoid spreading or contracting the new coronavirus.

Kettler shows me the precautions they're taking to keep customers and employees safe, at a distance of course. We're trying to follow the signs instructing people to stay six feet apart, which Gov. JB Pritzker and the Illinois Retail Merchants Association recommended for grocery stores to post. The association published a list of guidelines, which the governor urged all stores to adopt.

They include installing barriers in front and behind cashiers to limit contact, making periodic announcements reminding customers of social distancing and encouraging self check-out and cashless purchases.

There's also yellow and orange duct tape on the floor to show customers where to wait at the pharmacy or at check-out.

Kettler said most people are abiding by the rules. But I told him the last time I went out for groceries – I saw many who didn't seem to understand just what six feet looks like. He offers this rule of thumb: "Two shopping carts is about six feet. So you just measure one shopping cart and the next one and then you're six feet away."

As we made our way through the store, I asked Kettler a question that's on a lot of consumers' minds: do you have any toilet paper?

"I don't know that we have toilet paper. But we have booty wipes," he said, pointing to packs of wet wipes. They're next to the empty shelves where rolls would have been with signs that read "LIMIT 1." Kettler said availability depends on the store.

"We'll get a truck in and then they're sold out in 45 minutes, which would normally last us quite a bit of time," Kettler said. "And I understand the consumer fear, but what I would like to tell everyone is: let the supply chain catch up a little."

So far on the list of what to do while grocery shopping: wipe down the carts and stay six feet away from other customers. The don'ts? Don't overbuy things like toilet paper.

People should also wear masks to prevent spreading the virus, according to new recommendations from the Centers for Disease Control and Prevention.

Pritzker urged residents to do the same. It could be a homemade or paper mask, but save the medical ones for the health care workers, Pritzker added.

Kettler has one more for the don't list: "Don't make this into a family outing. Send one person to do grocery shopping."

This last one may be hard, since a lot of us are cooped up in the house for most of the day.

But it's important, said Dr. Vidya Sundareshan, a professor and infectious disease specialist at Southern Illinois University School of Medicine and medical consultant to the Sangamon County Department of Public Health.

"We want to be as strict as possible with the social distancing," she said. It may not seem like such a big deal if you go with your partner or child, but if everyone does this, that's twice as many people in the store at once, making social distancing even harder.

Some stores, particularly in the Chicago region, have started limiting the number of customers allowed in at a time. Target and Wal-Mart have announced customer limitations nationwide.

Kettler said his store chain has not discussed limitations as of now.

'Risk is definitely there'

Sundareshan advises making the grocery trips quick and trying to avoid touching too many items while there.

The precautions shouldn't end after you buy the groceries. Sundareshan says to use hand sanitizer when leaving the store. Once at home, wipe cans and glass bottles, and countertops where you set grocery bags with a disinfectant recommended by the U.S. Environmental Protection Agency to guard against coronavirus.

"Wiping down those surfaces definitely decreases the burden of the virus, the same as the case with cans or glass jars," Sundareshan said.

The precautions may seem burdensome or over the top. But Sundareshan says Illinois hasn't yet had the surge in cases expected, which she says models suggest could happen between April 15 and May 15.

On the brighter side, Sundareshan said social distancing does work.

As Pritzker said when introducing guidelines for grocery stores: "We are asking grocery stores to make their requirements as clear as possible. But it is up to each individual to follow our social distancing requirements."