Mayor Davlin wants to make Springfield the No. 1 green city 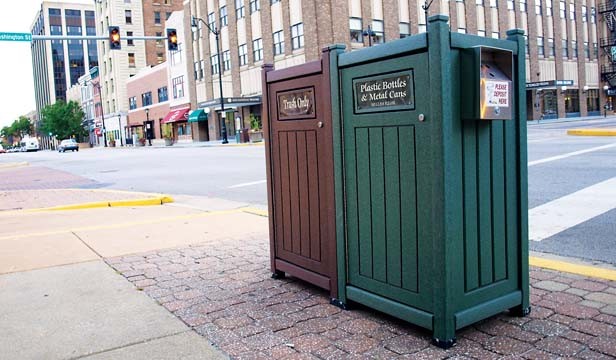 The world continues to surprise me, and never more than the day in 2008 I read that Springfield had been named one of the top 50 greenest cities in America by Popular Science magazine. Surprise gave way to dumbfoundedness in August, when the National Resources Defense Council recognized Springfield as one of its 22 “Smarter Cities” for 2010 on the basis of its commitment to clean energy. Mayor Tim Davlin, finding himself unexpectedly at the head of a city government lauded for something more than the number of parking spaces per acre, has said he wants to see Springfield ranked as the top environmental city in the U.S.

It is easy to dismiss this as mere enthusiasm from a politician who either doesn’t know Springfield or doesn’t know how much more than Springfield other U.S. cities are doing to reduce their carbon emissions. I mean, how is a city government that cannot affect the Union Pacific railroad going to affect planetary climate patterns? I have lived in or otherwise gotten to know several of the nation’s greener cities – Portland, Ore., Oak Park, Evanston and Highland Park in Illinois – and as a journalist have become familiar with municipal greening efforts in lots of places I haven’t. To say that Springfield has its work cut out to out-green a place like, say, Davis, Calif., is to say not nearly enough.
Springfield owes its emergence as a clean-energy leader to CWLP’s decision to purchase the equivalent of about 18 percent of its native energy requirements from generators using wind power. “Decision” is not perhaps the most accurate term to describe the city utility’s capitulation to legal extortion by the Sierra Club, which threatened to strangle the new power plant project in lawsuits if it didn’t do the deal.
The city has since tried to live up to its new reputation as a clean energy leader by the usual green initiatives. There are a scattering of green roofs in the city (at St. John’s Hospital, the Springfield Dominican Convent, the Agriculture Building at the state fairgrounds), solar panels have been installed atop a school or two, at least one local bank offers Energy Efficient Mortgages and the city is investing in energy-efficient traffic signals.
The wind power deal aside, however, Springfield is little greener today than it was in the latter 1970s. Even then, CWLP had a staff of capable and idealistic alternative energy experts. (I relied on their expertise when I had a solar-assisted house built for me on the east side in 1982.) Drop-off recycling was available, and solar panels popped up on the odd house roof – or, as most of the neighbors probably saw it, on the roofs of the odd house owner. There were campaigns to encourage energy-efficient lighting, too, although the smart switch in those days was from incandescents to tube-style fluorescents in offices.
Such efforts, while laudable, did not make Springfield a green city, and Mr. Davlin’s efforts 35 years later are unlikely to do it either. There are a great many things that City Hall might be doing that really would lower energy consumption in the capital, mainly in the areas of transportation, building codes and land use regulations. Instead, the city has limited itself to decorating downtown streets with more than 115 on-street recycling collection containers made from 100 percent post-consumer recycled plastic, offering free recycling for all electronics to both residents and businesses and handing out reusable shopping bags at the local farmers market. These are the sorts of things that Witold Rybczynski scorned last year when he observed, “Rather than trying to change behavior to actually reduce carbon emissions, politicians and entrepreneurs have sold greening to the public as a kind of accessorizing.”
What interests me about Mr. Davlin’s vision for green Springfield is not how green it is but how Davlin it is. In a Portland or an Oak Park, action on climate change is demanded by significant factions of the community. When the mayor wishes new ideas, he names a nine-person council to advise him. In Evanston, in contrast, the city undertook a citywide planning effort involving nine task forces, each headed by one City of Evanston and two citizen representatives, which spent months researching emissions reduction options and determining which measures would be the most cost-effective. That determined what might be done; what could be done depends on community priorities, which in Evanston’s case were determined in part by opening the draft of the task forces’ Climate Action Plan to review and comment by residents in public meetings and online. Implementation is being pushed by such organizations as Citizens for a Greener Evanston and the Business Alliance for a Sustainable Evanston.
I see nothing like that kind of broad-based concern in Springfield, whose greening is very much a mayor’s initiative. One man’s ambition is enough only so long as he wants to green only his city’s reputation, and not the city itself. In the end, mayors don’t make cities green, cities make mayors green.
Contact James Krohe Jr. at peptobiz@mindspring.com.