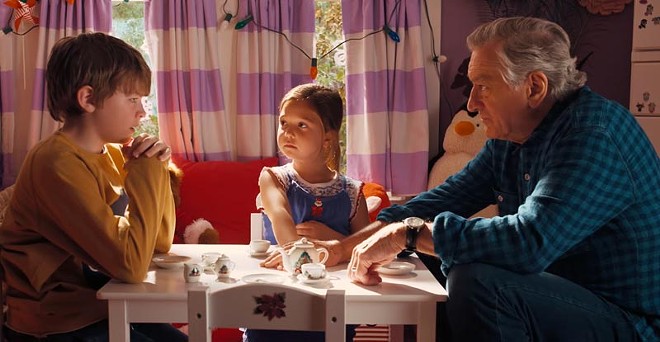 I suppose, whenever the occasion arises, everyone is entitled to have a little fun at work. So, I'm going to take that into account as I come to terms with Robert De Niro's latest foray into comedy, The War with Grandpa, a harmless trifle an upstart distribution company is throwing into the nation's empty multiplexes in an effort to lure the timid back to theaters. (While I'm sure there is a movie I would say is worth running the risk to go out and see, I can't think of what it would be right now. However, I can say without hesitation that Grandpa is not that film.)

Having been picked up during the Miramax fire sale by 101 Studios, this has been sitting on the shelf for over three years, and unlike fine bourbon, I can't imagine it's gotten better with age. Based on the YA novel by Robert Kimmel Smith, the movie is a kid's film with a worthwhile message and more than enough slapstick moments to satisfy its target audience, namely tweens with short attention spans who have yet to come to appreciate complex narratives. The hero of the piece is Peter (Oakes Fegley), a likable sixth grader who has his share of teenage woes. Not only is he getting bullied at school, but he's been displaced in his own home. Seems his grandpa, Ed (De Niro), a lonely widower who's becoming a bit too forgetful for his daughter's (Uma Thurman) comfort, has moved in and been given his room. Relegated to the attic, Peter decides this aggression will not stand. After a few passive aggressive acts that make it clear to Gramps he's not happy, the two sit down, draw up rules of engagement and embark on what starts out as a series of good-natured, tit-for-tat practical jokes which escalate to elaborate, well-coordinated pranks that could only be pulled off with a large special effects budget at your disposal.

The physical gags are hit-and-miss, some inspired - a funeral Ed attends goes hilariously awry – others labored and predictable. Also labored and predictable are De Niro's fellow geriatric co-stars Christopher Walken, Cheech Marin and Jane Seymour. (I'm hoping the casting director offered Seymour's part to Meryl Streep in an effort to pull off a Deer Hunter reunion with De Niro and Walken. If so, she had the good sense to pass on this one. If not, file this one under "Missed Opportunity.") These three show up for an easy paycheck, mug for the camera and prove that despite their collective serious acting chops, they just can't find a way to make a dodgeball game funny.

I'm not ashamed to say there were a couple of times when I laughed out loud. Surprisingly, director Tim Hill gets more mileage out of De Niro accidently exposing his junk than you'd expect, while a big reveal during an elaborate birthday party that jumps the rails proves far funnier than it had any right to be. And the message Ed was able to convey to Peter about the futility and insanity of war is delivered with a sincerity that cuts through all the childish shenanigans we've had to endure.

I've seen much better films than The War with Grandpa. I've seen much worse as well. And while I could have spent the time starting War and Peace, at least it didn't offend me like the recent releases Unhinged and Antebellum. I guess I'll chalk that up as a small victory. It's been that kind of year, where movies are concerned.