A different kind of mural pops up in Springfield 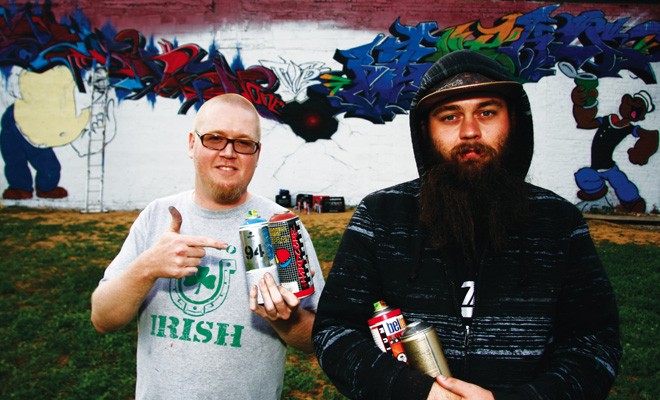 Though it started as mere vandalism, modern graffiti has become an art form, and it’s making an appearance in Springfield – without defacing anyone’s property.

A team of graffiti artists known as TVR has set up shop in Springfield, with one large mural under its belt and another in progress.

TVR stands for “Total Visual Renewal,” says Ryan Wilson, one of the founding members of the group. He goes by the nickname “Azone1” when painting graffiti. Talking from atop a 12-foot ladder with a can of spray paint in hand, Wilson tells of graffiti’s origins as youthful mischief and gang territory markings in cities across the globe. What started as crude symbols and block letters has evolved into high art with intricate, three-dimensional designs. Many of the better practitioners have become professionals, painting commissioned works in places that previously would have gotten them arrested.

“A lot of people see spray paint and think, ‘Oh, it’s just kids,’ ” Wilson says. “It’s not just kids, though. Some of us have been doing this forever, just now we do it legally. When you reach 30 years old, it’s harder to say, ‘Officer, I’m just a confused kid.’ ”

Wilson and Spencer Stokes of Springfield, another TVR founding member who goes by the nickname “Marsho,” are painting a mural on the side of Clay’s Popeye’s Barbeque, 1121 South Grand Avenue East. The mural fittingly features the cartoon character Popeye, his arch-nemesis Bluto and other characters from the cartoon strip.  The completed mural will feature the slogan of the Springfield-based genHkids Coalition, “Eat real. Move more.” and the currently vacant lot it overlooks will become a community garden providing fresh vegetables for the restaurant.

Stokes, a native of Springfield, says he first started painting graffiti about nine years ago when a friend from California showed him how. He says he enjoys expressing himself through art while creating something for the public to see.

“It’s definitely a different aspect,” he says. “You get a lot of people who are interested and want to talk and enjoy what they see. We took a wall that was pretty rough, and we’re putting a lot of work into it to make it something that people can look at instead of despise. I personally would rather drive by a wall that has some color, whether it’s this style of art or another. It’s better than just a plain wall.”

They and other TVR members started the mural at Clay’s Popeye’s Barbeque about two weeks ago, with the blessing of the building’s owners. Helping TVR with the mural are two big names in the graffiti world: Henry “Gape” Gonzalez of Chicago with the Real Kings graffiti crew and Gerry “Omen74” Guevara of Gary, Ind., with the CISA Tribe graffiti crew. They’ll each add their artistic touches later this month.

TVR previously painted another mural in Springfield: the west wall of D&J Café, 915 W. Laurel St. That mural features anthropomorphic jungle animals like a reggae lion. While TVR has donated most of the paint and labor for their first two works, the group hopes to do commissioned pieces around Springfield in the future.

Wilson laughs as he recalls Springfield Police reluctantly pulling up to D&J Café while TVR was painting the mural.

“The squad car rolled up and they said someone reported us,” Wilson said. “Even though they knew we weren’t doing anything wrong, they still had to check it out.”

Wilson says he doesn’t mind talking with the police or anyone else about graffiti, partly because he feels his job is to change the perception of the art form. Ultimately, he says, the art of TVR is meant to make Springfield more beautiful.

“It’s for the community,” he says. “Even though the community doesn’t own it, they have to look at it. We paint for fun and to transform the look of the community.”