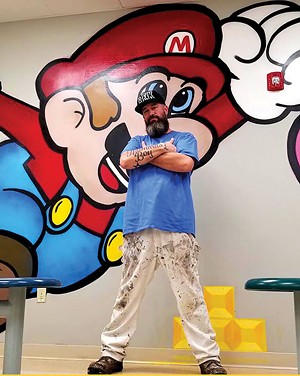 Ron stands with his completed Super Mario mural located in the cafeteria of the Lincoln Prairie Behavioral Health Center in Springfield. Spray-painted November 2019.

Graffiti is thousands of years old. In its literal sense, it's the act of writing on walls and other surfaces – traditionally those that don't belong to the writer. In modern times, it's linked to cans of spray paint and more often than not, music. On walls in alleys and on passing trains, it's become a blemish mostly overlooked, misunderstood or ignored. Illegal without consent, it can simply be the evidence of punk kids causing mischief. But it can just as easily be a tag marking a gang's territory as a warning sign, telling outsiders they've crossed a line. A nondescript spray-painted group of letters or numbers on a wall can mark the difference between love and violence.

Over the years, graffiti has evolved from the most basic tags to high-level art, with aficionados not only consenting, but clamoring to commission spray-painted masterpieces on a large scale, while artists gain recognition. Movies, music, culture and social media have brought graffiti culture to many who otherwise would have never known its depth. No longer exclusively painted under the cover of darkness, graffiti has crossed into the light of legitimacy.

Ron Kaszuk thinks of graffiti as American hieroglyphics. He is and has been a lot of things. He's a father. He's been a failure. He's a mentor. He's been a convicted criminal. He's an Athens resident and a South Side Chicago native. He caused his share of trouble and exorcised a legion of personal demons. Despite all that, and failing art class in high school to boot, he's found popular reception for his art, which was once 100% illegal. With the exception of painting the occasional train car, he's gone 100% legit. Where his goal used to be illegally tagging over someone else's illegal work, his biggest dream now is to collaborate with the TATS Cru, a group of New York City artists known for being largely responsible for graffiti's current cultural standing, particularly in graffiti murals. It has taken Kaszuk a lot of grit to get where he stands, but now in his 40s, his passion is finally bearing fruit. He is a legit graffiti artist, and he's just getting started.

His intensity is immediately apparent, and his love of art is painted all over him. Perpetually clad in self-dappled painter's gear, he lives to create. He is a man doing what few have the courage to attempt: pursuing a dream borne of passion. He has a big heart he openly wears on his sleeve, and the man bleeds paint.

Ron did a lot of tagging and running around with characters some would call unsavory. "It started pretty early," Ron says, recalling his introduction to graffiti in South Side Chicago. "I lived in a gang neighborhood, so it was everywhere. Writing on the walls just seemed natural to me. It was like, we can do this. What are they gonna do? Nobody called the cops. Nobody cared."

Ron's first experience writing on someone else's property was when he was nine years old. "My brother and his friends, before they were into graffiti, they were gangbangers. They were tattooing each other with India ink. So, I stole a bottle of it, and I took a clean cigarette butt, snapped it off. Dipping it in the ink, I was using it kind of like a marker. That was on my neighbor's garage. I wrote all over it. I even climbed a tree so I could write on the roof. My brother was so pissed," Ron remembers.

He didn't use ink for long. "Once we started tagging, spray paint was natural," Ron says. "I got my name looking decent, and that was pretty much it."

Paying for the past

Years later and guilty of burglary, Ron's past followed him to Springfield in 2007. "When I came down here, I was on the run. I had a warrant for my arrest, but I wasn't really living like that anymore. So, I turned myself in," Ron explains.

By happenstance, this timing gave him a remarkable opportunity to positively craft his passion. He found himself on a bus to prison handcuffed to his brother's friend, who asked him if he was a hustler like his brother and where his talents lay. When Ron told him he was into graffiti, the man said, "OK, as soon as we get to the joint, I'm gonna get you a pen and paper. You start drawing. I'll start taking orders."

Soon Ron had a steady list of customers commissioning drawings. Whether he was drawing an inmate's daughter's name in graffiti script or crafting a mockup for a tattoo, Ron stayed busy. There were other inmates drawing skulls, hearts and the like. He drew things differently than those around him, which created a market specific to his talents. This put him in a position in which no one bothered him while he did what he loved. There wasn't access to paint, but that didn't matter. It gave him time to hone a craft.

After his release six months later, his desire to paint remained strong, but he struggled with years of depression, regret and substance abuse, which made confidence and motivation tough to come by.

Ron started finding more ways to embrace his love of paint. After years working for other people and readjusting, he started his own business: #REKSERVICES in Athens. Focused initially on painting houses, he branched out into working with furniture. One of his first paid opportunities came from a guy who provided him with a dose of confidence.

After turning down a bid to have Ron paint his house, Jeff Cox, a Springfield-area resident and respected member of the Illinois legal community, hired him to convert some old furniture into an elegant alternative. This was a turning point for Ron.

"The confidence that came from that had me looking people in the eye. I didn't feel like that dirty scumbag running around the South Side of Chicago anymore, ya know? I started to feel like I actually could shake my past off, whereas before I felt like I was walking around with a dark cloud surrounding me."

Cox was pleased enough to commission more from Ron. "He's incredibly talented, and I've passed his name on to a lot of friends and family," Cox says of Ron. "He doesn't disappoint with his work."

Things started moving quickly after that. He got the opportunity to paint a mural on a Third Street wall downtown and was struck by a decade-old memory: "I was at church, and this dude was praying over me. He asked what I needed prayer for. I didn't know how to tell him that I was broken. I was alone. This dude who didn't know anything about me says, 'I don't know if this means anything to you, but it feels like God is telling me to tell you to paint your freedom.'" 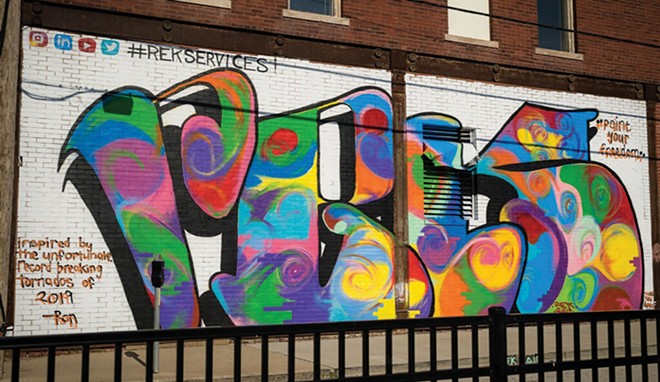 Painting his mural, he remembered that moment and was inspired to write "paint your freedom" in the top right corner of it, which marked a turning point. "That was June 1 of 2019. Once I started being true to following this art stuff and just making that my life, crazy stuff just started happening. Like, I went from an idea to a career in less than six months."

Jeff Cox hooked him up with then-director John Sullivan at the Department of Agriculture for a canvas graffiti exposition at the 2019 Illinois State Fair. Ron's work was well-received, and within a few months he was invited onto the Intentional Dangerfield Podcast's Episode #60 to discuss his art for thousands of listeners.

Since then, Ron's work has become a hot commodity. His favorite thing is to paint graffiti inside someone's house. He has gotten the opportunity to showcase his art in a number of businesses as well. One that stands out is a Nintendo-themed cafeteria at the Lincoln Prairie Behavioral Health Center.

Another big project he is working on involves mural work for Clean Impact, a local commercial office cleaning company. They recently bought a building that was equipped with a screen and projector, which they planned to convert into an employee training room. Then came COVID-19. "Life got more serious, and they wanted to do something more fun for their employees," Ron says. "So they decided to make an arcade/movie theater. They bought arcade games and a pinball machine. They're getting theater-style seating. So, I've been creating mock-ups for the walls."

Ron has so many projects in the works that he even has one he can't speak about on the record. While he's still down to paint houses for a buck, he finds himself with the time to try to pass some knowledge on to those interested in learning from his successes, as well as his mistakes.

Ron loves to influence other artists and provide advice when they want it. Asked if he is mentoring anyone right now he says, "I'm fortunate that I am: Bones 47. Him and another guy in his crew just did their first paying job. I didn't get that for them or anything, but I've encouraged him and kind of talked him through how to do it."

Bones has nothing but good things to say about Ron. He says, "Ron is a great friend and graffiti artist. He's my mentor on graffiti and life in general. I haven't known him that long, but he's supported my growth as an artist more than anyone else ever has. He believes in my talent and pushes me to try harder every day."

Ron praises his protégé: "Bones does something in his sketchbook every day. He's an amazing sketchbook artist. His hand styles are off the chain. They're way better than mine. What I'm trying to urge him to do now is to paint other stuff, because if you're going to paint for other people, you gotta paint what they want. How many clients are gonna want my name on their wall?"

In addition to the opportunities provided by Jeff Cox, the person Ron most credits with his success is his girlfriend, Kristin. "She has a lot to do with the fact that I'm sitting here today," Ron says with misty eyes. "Where the whole world would've stopped putting up with my shit, not only did she put up with it, but the days when she was angry and the bills were late she still supported me – at times financially, and other times telling me to go do it and she'd take care of the baby. There would be no #REKSERVICES if it wasn't for her."