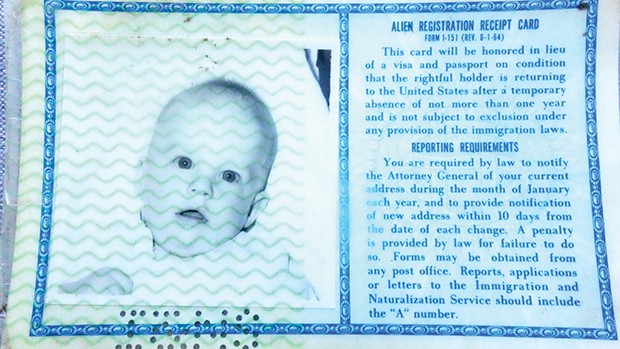 photo courtesy of u.s. immigration and naturalization service
It didn't work in bars, but an ancient green card was just the ticket for securing jobs.

For the first time in nearly two hours, I heard a voice, over a loudspeaker, speak English.
“Would Mr. Rushton please report to security?” There was no Spanish accent. I did not respond.

Minutes earlier, I’d put my dad on a plane headed to the United States after a week together in Zihuatanejo. He’d insisted, before going south of the border, that he didn’t need his green card, no matter what I said. I figured he’d been lucky to get as far as he had, and, now that his plane had left the gate, I saw no point in finding out why Mr. Rushton was wanted here in the Mexico City airport. I got on my own plane a half-hour later and left without incident, trusting that dad wouldn’t get deported to Canada upon landing in Houston. Sure enough, the Department of Homeland Security let him go after some threats and a stern talking-to upon arrival in America. He didn’t even miss his connecting flight.

That’s the thing about being a white male. You can, usually, count on getting the benefit of the doubt, especially if you’re old. And even when you’re young.

For years, I clung to a green card issued to me on Aug. 13, 1964, the day I arrived in the United States and nine months to the day after my birth in British Columbia. I considered getting a new one in the 1990s, when the government passed rules requiring most resident aliens to renew, but I procrastinated. Lines, I’d heard, were long. Plus, Duke Austin told me that the renewal deadline had been pushed back.

I’ve never met him and don’t know what he’s doing now or even if he’s alive, but Austin, then, was a spokesman for Immigration and Naturalization Service, precursor to the Department of Homeland Security. As a reporter, I had something beyond reach of the public: A phone number that connected you to a live person at INS. That was Austin, a swell guy, as I recall, whom I’d interviewed a couple times for stories.
I expected no trouble when I presented my green card upon re-entering the United States after a 1995 road trip to Baja. “This card is expired,” a border agent told me. I started explaining the law and name dropping, telling him that Duke Austin said… The agent interrupted. He didn’t care what some guy with a Hollywood name had told me: You can’t go through life with a photo ID created before you grew hair – this should have been renewed when you turned 14.

I panicked. I like Mexico, but not enough to move there. They let me go, but still I didn’t renew my green card, which would have cost money and taken time. And so I kept using ID from the pre-Apollo age. It worked every time as I moved between jobs, with human resource specialists accepting my laminated offering as proof of right to work in the United States. Always, someone with a freshly opened personnel file in front of them held the antique card, squinted at typewritten letters, turned it over, saw my photo and, inevitably, asked, “Is this valid?” Of course: Do you see an expiration date? That was all it took, instructions to the contrary in government-issued manuals no one ever checked.

Nearly a decade ago and 32 years after it expired, I renewed my green card. That is a story unto itself – let’s just say, wear your best suit and show up early. My card expires next month, and I face a choice: Should I renew it or apply for citizenship?

There is a lot to like about Canada, but I’m leaning toward rooting for the USA come the next Olympic curling tournament. Donald Trump, bless his soul, has made my decision easier than ever, and strictly from a financial sense. Since Trump became president, the application fee has been frozen at $640. Under his predecessor, the charge was hiked from $595, just in time for Trump to take office and get accused of being cruel toward migrants. Green card holders had it even worse under Barack Obama, whose administration raised the renewal fee from $290 to $455.

Thanks, Mr. President, for your fiscal restraint in helping out folks who aren’t from here. In an era where the price of everything keeps going up, the cost of staying in America has stayed the same under your watch. I’ll take full advantage. Instead of renewing my green card, I’ll spend a bit more and become a citizen. Which means I’ll be able to vote next year.

“We must protect our borders from the ravages of other countries making our products, stealing our companies and destroying our jobs,” Trump said on Inauguration Day in 2016. “Protection will lead to greater prosperity and strength.”

“You and your fellow citizens have chosen a new government, a government that believes deeply in the diversity of our country,” Justin Trudeau said when he became prime minister of my homeland in 2015. “Have faith in your fellow citizens, my friends. They are kind and generous. They are open-minded and optimistic. They know in their heart of hearts that a Canadian is a Canadian is a Canadian. My friends, we beat fear with hope.”

I’ll remember both speeches when I go to the polls, eh.