Is Nevada final stop for statue? 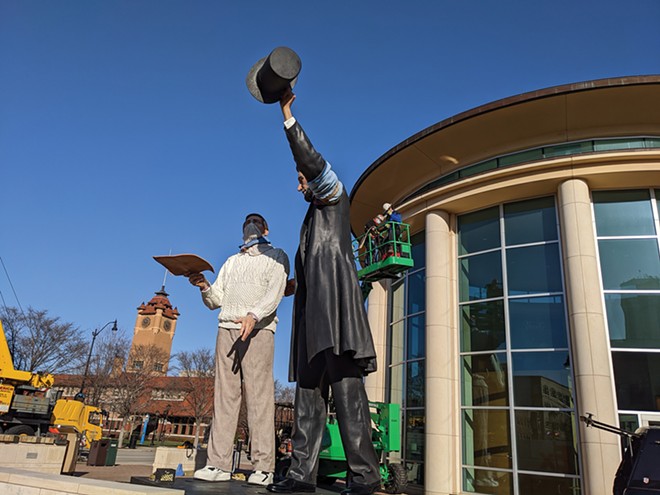 Photo by Bruce Rushton
The DTPLM would be perfect for the statue crews removed from the ALPLM this week.

That horrid statue of Lincoln and whozits, removed from the entrance of the Abraham Lincoln Presidential Library and Museum this week, is headed next for Washington, Illinois, where it is scheduled to be displayed for a year at some sort of gathering spot.

But after years of floating from one town to the next, the statue deserves a permanent resting place. Why not the Donald J. Trump Presidential Library and Museum, wherever that might end up? Trump, after all, once compared himself to Lincoln on a debate stage, and the three-story-tall sculpture captures that perfectly: "He said what?" exclaims Abe, pulling his stovepipe off in disbelief, as modern day-guy-in-bad-sweater, looking worried, ponders the quote printed in an old-fashioned tabloid.

If nothing else, the Abe-with-bad-sweater-guy statue wouldn't cost The Donald much – the tab for a two-year Springfield stay was $24,000, paid by the city — and money might be an issue for the DTPLM, given former presidents are expected to pay construction costs before the National Archives and Records Administration takes over and pays for operations through eternity.

Most presidents set up foundations so that the charitable can make tax-deductible contributions to erect buildings honoring legacies. That might prove challenging for Trump, given that the New York attorney general forced the dissolution of his most notorious nonprofit foundation, with our 45th president agreeing to donate $2 million to charity after being accused of using the Donald J. Trump Foundation as a funnel to his 2016 campaign fund. While Trump might realize a tax deduction by donating copies of his tax returns to a museum erected in his honor, everyone else willing to donate to the DTPLM Foundation raise hands. Going once, going twice...

My guess is, the Mitch McConnells and Rodney Davises of the world, not to mention Rudy Giuliani and Vladimir Putin, will neither buy nor pimp tickets for $50,000-plate fundraising galas, but what the hey. The Trumpster always was his own man and no one can deny his appeal — the only presidential candidate in U.S. history to get more votes than Trump was his challenger. Perhaps Trump will make a comeback if Ted Cruz doesn't beat him to it. Six score and three years ago, Grover Cleveland held two non-consecutive terms and ends up somewhere in the middle when historians rank presidents.

But let's not hold our breath.

There may be no Trumpville, yet, but miles from Cleveland and Springfield, there is Winnemucca, which would be perfect for the DTPLM, assuming other burgs decline the honor and Trump can't convince the National Archives to convert a failing golf course into a presidential institution. Also, there is his childhood home in Queens, which not long ago was offered for $725 a night on Airbnb and hit the market last year with an asking price of $2.9 million. There were no takers.

Enough about New York, let's talk Nevada. Like all stately pleasure domes, the DTPLM must go somewhere, and for those who have not had the pleasure, Winnemucca, named for a Native American controversial in long-ago politics, is a stunning place for a presidential library and museum, capturing perfectly the essence of America by virtue of lying at the crossroads of Interstate 80 and U.S. 95. It's in a Johnny Cash song. Land is cheap and TIF schemes rare – if the former president yearns for Atlantic City days, casinos are welcome in a state that levies no income tax. The population is south of 8,000, but, as Trump might say, Winnemucca is huuuge, and within driving distance of Reno. It is the seat of Humboldt County – being the county's only incorporated town, there wasn't much choice — where voters went 76 percent for Trump.

There are two hardware stores, so those who would protest, after driving hundreds of miles, can stock up on spray paint and boost the local economy. The rich can fly: The Winnemucca airport, like the landing strip here in Springfield, boasts a runway capable of handling 737s, not that many have visited lately, plus two helipads. That's vital to a guy like Trump, who, while on the campaign trail, bemoaned his relegation to a Tahoe tarmac an hour's drive from where he had landed: He told one of the last rally crowds of his presidency that he would have preferred flying straight in on Air Force One so that he could park it behind the stage. He'd be allowed to do that sort of thing in Winnemucca, with plenty of room left over for an RV park.

Like the ALPLM, Washington, Illinois, is named for a president, and good things always come in threes – Nancy Reagan's astrologer, in a heartbeat, would pick the DTPLM in Winnemucca as bad sweater guy's final destination. So don't be surprised when the statue pops up in the Silver State, along with bronze odes to Stephen Douglas and Pierre Menard recently removed from state Capitol grounds. They, too, need homes, and the state needs money. Why not ship everything to Winnemucca, on the DTPLM's dime, where the future lies?