St. John's Hospital chaplain writes a book about how to help those who are grieving

We live in a society that denies death. 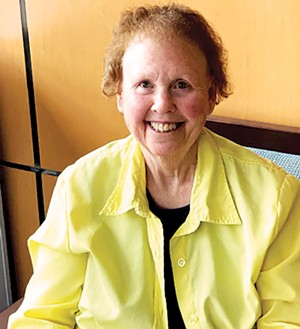 PHOTO BY SCOTT REEDER
Dee Stern, a chaplain at HSHS St. John’s Hospital, recently wrote a book on grief, Comforting the Bereaved Through Listening and Positive Responding; What are the Bereaved Trying to Tell Us?

That is the observation of Dee Stern, a chaplain at HSHS St. John's Hospital, who recently wrote a book on grief.

The book, Comforting the Bereaved Through Listening and Positive Responding; What are the Bereaved Trying to Tell Us?, was recently published by Archway Books.

Folks often don't know what to say to someone who has suffered a loss, so sometimes they say inappropriate things.

"We live in a death-denying society. People are afraid to say the words 'died,' 'death' or 'dying,' because that's pretty permanent. But they will say someone 'passed,' because that doesn't sound as permanent as "died," Stern said.

She leads support groups for family members of those who have taken their own life as well as those whose loved ones have died from natural causes.

Never say someone "committed" suicide, Stern said. She said the word "committed" conjures thoughts of a criminal act, which suicide is not.

During her time in the Catholic Church, she has observed a dramatic change in how clergy address suicide.

"It used to be they would not even have the person in the church. They'd have to wait outside, and then they would have the Mass or the service and then they would go to the cemetery. That was a long, long time ago. They looked at it as a sin. Now, it's viewed as a mental health thing. The person was in severe pain and so much depression. The church deals with it much better now."

Although the church is dealing with some aspects of death better, that doesn't mean ordinary people are, she said.

"I'll give you several examples of what not to say. There was a lady whose son ended his life and someone went up to her and patted her on the hand and said, 'I'm going to pray for you because your son's been damned to hell.'"

Other examples of inappropriate things to say include, "Aren't you glad your baby died? Because now you don't have to worry about what it will be like when it gets older."

Stern's book can be ordered online from Amazon or Archway Publishing.

Stern tries to educate about grief not only through her writing but through teaching children, said Gloria Katzmark, a retired teacher from Little Flower School in Springfield.

Katzmark noted that Stern would teach eighth graders at the Catholic school about the symbolisms behind death by explaining funeral rituals and taking them for tours of Oak Ridge Cemetery.

"One of the things I remember learning is that when most people die, they are brought into the church feet first. But when it's a priest, he's brought in head first. So, if he would stand, he'd be facing the congregation," Katzmark said.

Scott Reeder, a staff writer for Illinois Times, can be reached at: sreeder@illinoistimes.com.