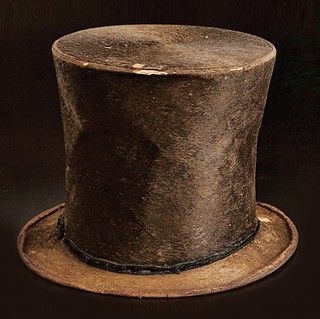 PHOTO COURTESY ALPLM
The Taper Collection includes a stovepipe hat with provenance so questionable that the ALPLM quit displaying it.
One of the planet’s most valuable collections of Abraham Lincoln artifacts has left the building, according to officials at the Abraham Lincoln Presidential Library and Museum. The artifacts, which include such relics as a pair of bloody gloves that Lincoln wore to Ford’s Theater and a cipher book that the Great Emancipator used as a boy, were removed from the museum on Monday, Chris Wills, ALPLM spokesman, confirmed. The artifacts, purchased for more than $20 million by the Lincoln Presidential Foundation 15 years ago, were removed by the foundation upon expiration of a loan agreement between the museum and foundation and more than a year after the state cut ties with the foundation in the spring of 2021, according to Wills and ALPLM director Christina Shutt, who broke the news to museum staff and volunteers in an email.

"It is unknown whether the foundation will store these artifacts or whether the items will be publicly accessible in the future," Shutt wrote in her email. "Though it has been asked, the foundation has not provided this information."

Wills said that a Chicago auction company picked up the artifacts known as the Taper Collection – the original owner was Louise Taper, who was on the foundation board when the private nonprofit took out a loan to acquire the relics. The foundation years ago warned that the artifacts might have to be sold if the loan wasn’t paid off.

"We have nothing from the Taper Collection still here," Wills said.

Foundation officials did not immediately return a voicemail message. The foundation in 2018 set a $9.7 million goal to retire the debt when launching a GoFundMe page, which has since been shut down with $35,000 raised.

In an unsigned statement posted on its website, the foundation wrote that the ALPLM and foundation "worked cooperatively to arrange for the orderly return of the collection."

The foundation board includes some of Illinois' most prominent movers and shakers, including former Gov. Jim Edgar, Sergio "Satch" Pecori, head of Hanson Professional Services in Springfield, Wayne Whalen, and Julie Cellini, a State Journal-Register First Citizen and wife of Bill Cellini, a longtime political power broker who was convicted of corruption offenses committed while former Gov. Rod Blagojevich was in office.

In her email, Shutt wrote that government documents filed by the foundation, which she did not specify, show that the private nonprofit group has sufficient funds to pay off a loan taken out to acquire the collection. Wills said that the documents are 990s, the equivalent of 1040 tax returns, which must be filed with the Internal Revenue Service. According to its most recent publicly available 990 form, the foundation had more than $24.7 million in net assets, including the Taper Collection, as of June 30, 2021, and had $9.2 million in liabilities.

In addition to the cipher book, gloves and hundreds of other artifacts, the collection also includes a stovepipe hat with a provenance so questionable that the ALPLM quit displaying it.