Going to church, or pot

I don’t know much about religion.

I do know something of drive-ins, the last of which I visited to watch Rambo many years ago. Just out of high school, my date and I did not depart our car – we started out pretending that we would count shots fired. I do not recount how many shots were tallied, but it was nonetheless a memorable evening. Germs were exchanged.

I have not come to Jesus at a drive-in, but I have heard that Buddhists believe divinity is everywhere, so I suppose a drive-in would be as good a place as any to find God. That’s what Pastor Eric Hansen, who presides over Destiny Church on MacArthur Boulevard, had in mind when he planned an Easter service in the church parking lot.

Destiny Church, from what I can see, has done right during pandemic.

A church, Hansen noted last month, is more than a building. “This is now our golden opportunity, as the people of God, to be the salt and light for our city as we ‘shelter in place,’ loving and caring for our neighbors in the name of Jesus.” Hansen wrote on the church website when Gov. JB Pritzker extended a ban on public gatherings through April.

The church’s digital footprint shows that parishioners have been staying apart from each other, meeting via Zoom on such topics as “How Not To Kill Your Spouse In Quarantine.” Sunday services have been on YouTube. For Easter, Hansen announced as the day drew near, there would be a drive-in service, lasting one hour, in the church parking lot. Pee first: If you really need to go, parishioners were told via Facebook, just one person at a time would be allowed inside the building. Hansen would preach by radio.  “Parking spaces will be at least six feet apart, per physical distancing requirements.”

The government said no.

In what's best described as an offer the pastor couldn’t refuse, Gail O’Neill, Sangamon County public health director, told Hansen that the service would violate bans on public gatherings: Cancel or else. “The mayor’s emergency order authorizes the Springfield Police Department to take enforcement action to gain compliance with the governor’s executive order,” O’Neill wrote in a letter sent five days before Easter. “The Sangamon County Sheriff’s Department and the Illinois State Police are prepared to enforce the governor’s executive order in the interest of public safety during this unprecedented public health crisis.” In addition to state and local police agencies, the letter was cc’d to the Sangamon County state’s attorney.

“At first, it sounded like a good idea,” O’Neill says when I asked about the church’s plan. But the more officials pondered possibilities, the less good the idea sounded. “They’re still assembling,” O’Neill says. “Although they might be six feet apart, they are in violation of the executive order for a gathering. The what-ifs got to be too much.”

In Mississippi, a city recently backed off a ban on drive-in church services after the Department of Justice weighed in: You can't ban drive-ins for Jesus when drive-ins for cheeseburgers are allowed. In Springfield, Hansen, unhappily, stood down. Why, he asks on the church website, is the state allowing marijuana sales while cracking down on us?

It seemed an apt question, so I asked it during a gubernatorial press briefing: Why are recreational pot sales deemed essential while most states don’t allow it in the first place? What do you say to pastors and business owners who’ve been forced to shut down?

Church, the governor replied, isn’t quick, and worshippers might park close and open windows. “It’s as if they’re sitting in pews very near to each other,” Pritzker posited. Pot sales – and sales have boomed amid pandemic – are different, he claimed. “(W)hat’s happening in dispensaries has been that it’s very brief contact, and it’s somewhat socially distanced,” the governor said. “And so the handoff, just as it is with drive-up and pick-up food, is relatively brief.”

Hansen wasn’t impressed. “I thought it was weak and deflective,” the pastor says. 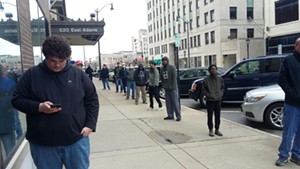 Photo by Bruce Rushton
The wait for recreational weed in Springfield stretches more than an hour. "It's very brief contact," the governor says.

After hearing from Pritzker, I ordered weed from a local purveyor, then received a text: My order was ready for pickup. When I arrived nearly an hour later, my order wasn’t ready, nor were orders ready for more than 20 others waiting on the sidewalk, who also had called first. Patrons were mixed. Some sneezed, some did not. Some used restrooms, some did not. Some wore masks, some did not. More than two hours after ordering, with much time spent amid strangers, I was handed a small jar of  pot, paying $12 in taxes on a $65 purchase.

They appeared to be selling pot to anyone with cash, which is what capitalistic drug dealers do. And Pritzker set pot shops up with an artificial monopoly that raked in $36 million last month, bringing total sales to $110 million since the state legalized weed in January.

I’m guessing, when all this is over, that the governor, still, will tout the state’s pot program: Sales have been robust, disadvantaged communities have been helped and blah-blah-woof-woof. He’ll also, likely, be praised for calling out Donald Trump, an easy target for those angry at government failures to address the pandemic.

The governor probably won’t talk to Wendy Zindars, who drove from Decatur on Easter with her husband Aaron, only to be turned away at an empty parking lot by Hansen. They’d listened to services on the radio, but this was the first time they’d made the trip. Easter, Zindars explains, is special. As instructed, she’d gone to the bathroom first.

“It was this special day, and we wanted to celebrate it,” Zindars says. “I think it was the wrong call.”