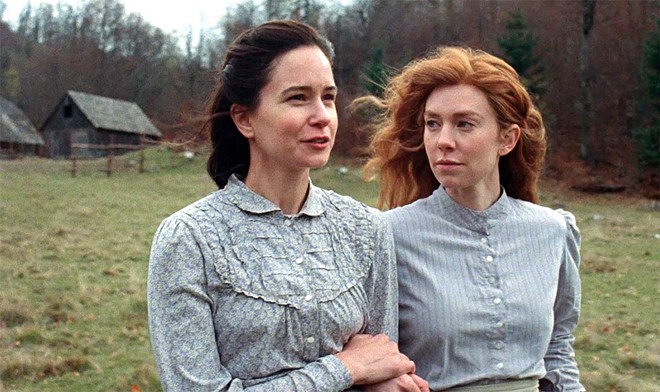 The World to Come

The World to Come - A worthy companion piece to Celine Sciamma's Portrait of a Lady on Fire, Moan Fastvold's The World to Come is an intimate look at loneliness and longing, a picture of two women trapped by their emotions and society, each desperate to find a way to express their deepest thoughts and find a modicum of solace in the harsh world. Driven by compelling performances by its two leads – Katherine Waterston and Vanessa Kirby - the film succeeds in recreating the harsh conditions faced by settlers on the frontier in the mid-19th century, underscoring the sense of isolation that drive the two couples at its center to desperate lengths and behavior that goes against the societal norms of their age. This unconventional love story proves haunting and lyrical, a cautionary tale concerning emotional repression. Available through Video on Demand.

Nomadland – Timely and noble, Chloe Zhao's Nomadland follows the nomadic existence of Fern (Frances McDormand), an Everywoman that finds herself living on the road, residing in her battered but trusty van, moving from town to town, menial job to menial job. She's far from the only one in the plight, as she encounters one traveling community after another as she moves on down the road, finding a resiliency and sense of kinship in those who have been forced to live in what is seen as an unconventional way. The film has nothing but good intentions and McDormand is solid as usual, yet in the end it proves unaffecting, more a factual document of events rather than an emotional howl of outrage. In theaters.

The Mauritanian – Kevin Macdonald's fact-based drama The Mauritanian examines one of the many tragic stories that have emerged from Guantanamo Bay, delving into the case of Mohamedou Ould Salahi (Tahir Rahim), who was swept up in the wave of 9/11 fear. Imprisoned for over a decade in the Cuban prison, the film deals with his plight to gain his freedom, ultimately helped by two unlikely allies – his own lawyer, Nancy Hollander (Jodie Foster), and opposing counsel Stuart Couch (Benedict Cumberbatch). Fascinating and infuriating, the film is a searing indictment of the Bush administration and their interrogation methods, while Rahim's fierce performance breaks your heart. In theaters.

Flora & Ulysses – Bursting with charm and imagination, Flora & Ulysses chronicles the adventures a precocious 10-year-old girl (Matilda Lawler) and a resurrected squirrel she believes has superpowers. She may be right, as the furry rodent appears to be able to fly and write poetry...then again, Flora may just be projecting her own needs on her bushy buddy, as she and her parents, George and Phyllis (Ben Schwartz and Alyson Hannigan), have lost hope, their dreams derailed by setbacks and doubt. What with dad being a failed comic book writer, superhero troupes are front and center, as is the notion that those who are bestowed with great powers must find their purpose and in accepting and using their gifts for good, they inspire hope. It's Disney, so there's nothing subtle about the message, or for that fact, the cross promotion they employ by alluding to many Marvel Comics' properties they control. Still and all, there's charm to spare, much of it supplied by Lawler and Schwartz, while the film's message of hope goes down easy. Give this one a shot – this is the sort of family film even adults will be enamored with. Streaming on Disney +.