Go out and play

A preview of summer theatrical offerings

Matilda Wormwood has been charming parents and children alike since Roald Dahl’s book, Matilda, was published in 1988.  The Hoogland Center for the Arts’ production, Matilda the Musical (June 28-30, July 5-7), is based on playwright Dennis Kelly’s adaption of the story and proves to be no less delightful. The Springfield Youth Performance Group, an organization spotlighting the area’s young talent, is presenting a colorful, energetic production of the classical children’s ballet The Little Mermaid (June 8).Finally, from the underground dance clubs of 1950s Memphis comes the award-winning musical with explosive dancing, irresistible songs and a thrilling tale in Memphis the Musical (Aug. 23-Sept. 1). For tickets, call 217-523-2787 or visit hcfta.org.

Disney’s The Lion King, Jr. (May 23-25), where the African savannah comes to life, opens New Salem’s Theatre in the Park season.  The theatre’s next production hits close to home. These Shining Lives (June 6-9) is based on the story of the Radium Girls of Ottawa.  Next up, William Shakespeare meets the Jazz Age in this adaptation of A Midsummer Night’s Dream (June 21-23, 27-29), set in New Orleans.  The inspiration behind All Shook Up (July 12-14, 18-20) is probably no secret, but the production does feature some enduring music. The Pirates of Penzance (Aug. 2-4, 8-10) premiered in New York City clear back in 1879, and Frederic and the band of tender-hearted pirates have been well-received ever since.  The season closes with Walking Across Egypt (Aug. 23-25, 29-31) where Maggie Rigsbee tries to bring Wesley, an orphaned juvenile delinquent, to the side of God and good Southern manners. For tickets, call 217-632-5440 or visit theatreinthepark.net.

The Muni Opera begins its season with the J. M Barrie classic, Peter Pan (May 31-June 2-5, 9), a delightful story full of pirates, make believe and fairy dust.   The season continues with the blockbuster musical, Evita (June 21-23, 26-30) which tells of the rise and fall of Argentina’s former first lady. Afterwards, the Muni lightens the mood a little bit and gives us Thoroughly Modern Millie(July12-14, 17-21), starring small-town girl Millie Dillmount, who is ready to make her dreams come true in New York City.   The Muni wraps up its season with another classic, The Wizard of Oz (Aug. 2-4, 7-11), which follows Dorothy Gale and her companions as they journey to the Emerald City. For tickets, call 217-793-MUNI (6864) or visit themuni.org.
The Legacy Theatre is giving its summer production of Hairspray (June 28-30, July 10-14, 17-21, 24-28) a long run, and for good reason.  The popular American musical has won eight Tony Awards, including one for best musical.  Call 800-838-3006 or visit atthelegacy.com for tickets. 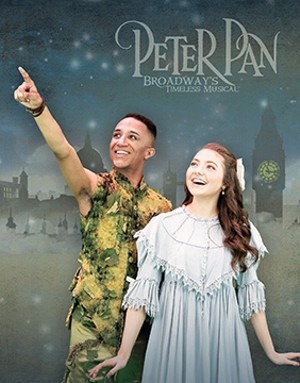 Sullivan’s Little Theatre on the Square has a lot in store for theater-goers this season.  The Little Mermaid (June 19-30) opens the season and the musical will include the familiar songs from the movie. Rodgers & Hammerstein’s Oklahoma! (July 3-14) follows with some spirited rivalry and a love story while the territory opens up to statehood. Disney’s Newsies the Musical (July 17-28) follows, the theatrical descendent of the real-life newsboys’ strike of 1899 in New York City, and it promises to be inspirational for taking a stand on issues of importance.  The Little Theatre then offers a chance to enjoy some British comedy with The Full Monty (July 31-Aug. 11).  You’ll get some laughs from the six men trying to overcome their fears and inner demons to make extra money as male strippers.  And, what else could follow up The Full Monty, but the Church Basement Ladies (Aug. 14-25)?   Set in rural Minnesota in 1965, the characters of this musical comedy offer up love, wisdom and food. Finally, the Little Theatre offers some theatre events for young audiences.  Rapunzel in the Wild West (June 7-8, 11, 13-15) is an interactive melodrama where children can help defeat the Bandit Queen just in time for Rapunzel’s birthday party. Children can also join the Darling children in Disney’s Peter Pan Jr. (5-6, 9, 11-13) on their adventures in Never Land.  Then, The Very Different Duckling (Aug. 2-3, 6, 8-10) has some adventures of his own with his eccentric friends and a hungry cat.  Tickets are available by calling 217-728-7375 or visiting thelittletheatre.org.

If you are up for a bit of a jaunt, the St. Louis Muny’s summer schedule is filled with an array of Broadway classics.  Guys and Dolls (June 10-16), which opens the season, premiered in 1950 and is considered by many to be the perfect musical comedy.  Next, you can experience the tale of the unlikely pair, Charlie and Lola, in the British comedy Kinky Boots (June 19-25), featuring the music of Cyndi Lauper, some kicked-up choreography and stilettos. After that nod to Britain, it’s back to the U.S. with 1776 (June 27-July 3) where more sobering scenes dramatize the efforts of John Adams to bring about a vote for American independence.  Cinderella (July 8-16) creates a magical evening and Footloose (July 18-24) offers a little teenage rebellion and a lot of music. Lerner and Loewe’s Paint Your Wagon (July 27-Aug. 2) premiered over 50 years ago and remains an American musical classic with elements of the gold rush, ambition, love and home.  The Muny closes its season with Matilda (Aug. 5-11) who shows us that sometimes you have to be a little bit naughty.  Call 314-534-1111 for tickets or visit muny.org.

Peoria’s Eastlight Theatre is featuring a relatively new production this summer.   Honky Tonk Laundry (June 14-16, 19-22) was written by Roger Bean, who specializes in jukebox musicals.  The music of both contemporary female country music stars and those of yesteryear are front and center as Lana Mae, the proprietress of the Wishy Washy Washateria, and her hired help, Katie, turn the laundry into a honky tonk to help Lana Mae bounce back from her husband’s cheating heart.   The Eastlight wraps up its summer season with another opportunity for the whole family to enjoy Disney’s Newsies (Aug. 2-4). Call 309-699-7469 for tickets or visit eastlighttheatre.com.

Tap into some sweetness

The abolitionist movement and the underground railroad

Saucy poetry and such