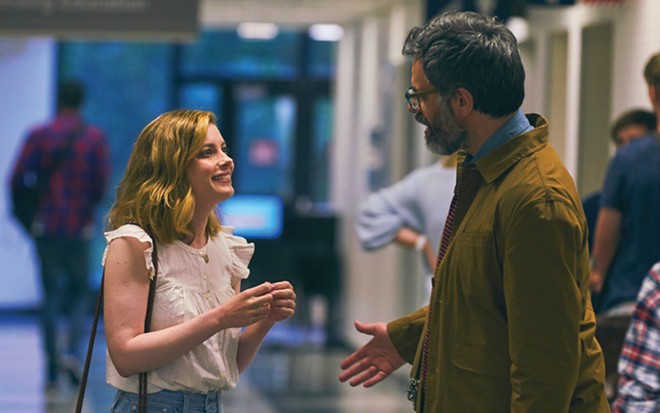 I suppose that looking back at the past is inherent in our nature. The phrase "If I knew then what I know now" is one tinged with regret, a futile thought that many of us fall victim to, time and again. Kris Rey's I Used to Go Here is a delightful, though flawed examination of how an opportunity to escape to the past tempts one vulnerable woman.

There's no question Kate (Gillian Jacobs) has had a rough go of it lately. Her first novel has just been released but the initial sales have been so disappointing, a planned book signing tour was cancelled. This indignity pales in comparison to her fiancé having recently left her, something the 35-year-old author has yet to fully process. However, out of nowhere, Kate is thrown a lifeline when she gets a phone call from David (Jemaine Clement), her former college creative writing professor, who asks her to return to her alma mater for a reading and discussion of her book. Thankful for the opportunity to put her life on hold, the author accepts and before you know it, she's walking down streets she'd roamed 15 years earlier, stumbling across old friends who'd never left and even partying in the old house where she and her fellow undergrads once lived.

A job offer to return to teach is dangled in front of her, and Kate is tempted. Retreating to a place where you were praised and felt confident has its appeal, especially when the job has limited demands; it's safe and there's little risk, the sort of position you could hold on to for 25 or 30 years without breaking a sweat, secure but ultimately stifling.

Writer and director Kris Rey beautifully captures the sense of inertia Kate is dealing with, presenting the devil's bargain she's been offered in the rosiest of lights. Taking place at Southern Illinois University in Carbondale, Illinois, the town and campus are seen as a bucolic retreat from the rat race of the city, a rural refuge where issues of national concern are seemingly non-existent. Rey succeeds in casting the environment as a tempting chimera that no one would blame Kate for escaping to (Alums of SIU will either agree with this rendering of the town and school or else wonder just what they were missing.)

The complications Kate encounters over her weekend stay range from inspired to desperate. The mixed messages she gets from David cloud her judgement. Is he interested in her romantically? Is that the real reason he wants her to work alongside him? And what about his wife? Then there's the issue of April (Hannah Marks), David's current favorite. Kate sees her being groomed much as she was and can't help but wonder at his sincerity where all things personal and professional are concerned.

While these issues are inspired, a late night break-in that finds Kate and current students busting into David's house in an effort to catch him red-handed with April is labored and far too long, while some of our heroine's third-act choices are out of character and seem to be done simply for expediencies sake where the narrative is concerned. The abrupt ending doesn't do the film any favors, either.

Still and all, Jacobs' charm helps smooth over some of these rough patches and it's through the actresses' efforts that we end up pulling for Kate in the end, despite her missteps. Her desire to check out is relatable, but her determination to face her sea of troubles is to be commended.