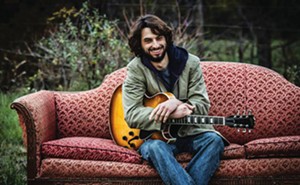 As we coolly creep into December, rapidly approaching the year 2015, the Springfield music scene shows its depth, diversity and caring in a variety of ways.

Jingle Jam, featuring local musicians performing in support of the St. Jude Children’s Research Hospital, returns on Sunday to Erin’s Pavilion in Southwind Park for a final showing. The Friends & Fans for St. Jude, hosted by Laura Richter for nine years, concludes its amazing chapter of combining music and munificence with this performance. Doors open at noon with the event’s Facebook page listing the many music acts and other doings. In her press release email, Laura thanked those who made all this possible through the years. We would all like to thank Laura for all her work in this incredible and blessed run.

In another charitable event on Sunday evening, The Station, along with pop rock wonders The Empty Pockets, play at Donnie’s Homespun for a Toys for Tots show. Pay your cover for the concert and bring an unopened toy for the kiddos who need it the most.

Come spend an evening with the Land of Lincoln Chorus (Barbershop) as they present “An Evening with Irving Berlin” at the Little Flower School this Friday and Saturday. Tickets include a meal between sets – not the usual fare at most concerts. Look them up online for all the skinny on these outstanding and gifted performers.

For an international interlude, let’s spend some time with Springfield-related musicians traveling the world. The talented and charming Chris Maxey returns from a year abroad studying in Dublin, Ireland, for a hometown holiday visit to present his popular “friends” show at Norb Andy’s on Saturday night. With several awesome guests such as Bob Littrell, Pete Sander, Nicole Landreth, Tenika & CJ Thunder, Dan Rohde, Nick Murphy and more, Chris has a keen show lined up for his welcome home party.

Springfield resident Cowboy Randy Erwin yodels like nobody’s business and sports an international reputation to back up that claim. From doing the yodels in Disney’s Home on the Range to appearances on major public radio shows and countless other incredible things, Randy is a world renowned yodeler (and he does some dandy rope tricks, too). It seems Koreans are now bonkers for yodeling, so Randy starts a 10-day tour of South Korea this week, sponsored by a yodeling club in Seoul. Visit Peter Lim, the Korean producer of the tour, and Bart Plantenga, an Amsterdam-based international expert on yodeling, on Facebook. Type in “Randy Erwin: Tex-Czech Yodeler in Tornado Country” on YouTube to see Bart’s video on our globe-trotting, golden-throated friend. Perhaps the yearn of the yodel will reunite Korea. Who knows?

Our daring and darling friend Marina V is just now returning to Los Angeles from Russia, where she recently rocked her homeland. We’re happy to announce her nomination for a Hollywood International Entertainment Award. Vote for Marina at http://hieawards.com in the fan favorite category. On Dec. 6, she’ll attend the awards ceremony/concert/red carpet/dinner in LA. We’re rooting for you, MV!

Out at UIS on Friday in Brookens Auditorium see Born in Chicago, a film documenting the young, white guys in the 60s who sought out the old, black, Chicago blues guys to learn from the masters. The screening is free, but tickets are required from the Sangamon Auditorium. Then on Saturday, go see the Chicago Blues Reunion at the Auditorium, featuring some of those actual music seekers from that time, now old masters themselves.

We sure covered a lot, but not nearly all, not by any means.