Gigi too obvious to be effective

Gigi & Nate has nothing but the best of intentions. It wants to raise awareness of the value of service animals, provide a positive portrayal of someone physically disabled and even take a swipe at illegal animal mills. It has a lot on its plate and it's woefully obvious in its approach, to its detriment. Nate (Charlie Rowe) is your typical teenage boy who's stricken with meningitis while swimming in an open quarry, which leads to his being nearly completely paralyzed. He has a long road towards recovery but gets some much-needed help from Gigi, a capuchin monkey who's been trained to be a service animal.

Heart-warming moments ensue as Gigi changes not only Nate's life but those of his family members as well. There's nothing this monkey can't do, and if the sentiment weren't laid on with a trowel, director Nick Hamm might have had something. However, a threat that would separate the titular pair feels much too convenient and, like so much about this movie, rings hollow. Gigi & Nate is a transition film, one you show 8 to 10-year-olds as a first step to get them to watch more adult movies. For that age group, this is perfect. Anyone older will see through its heavy-handed tactics. In theaters. 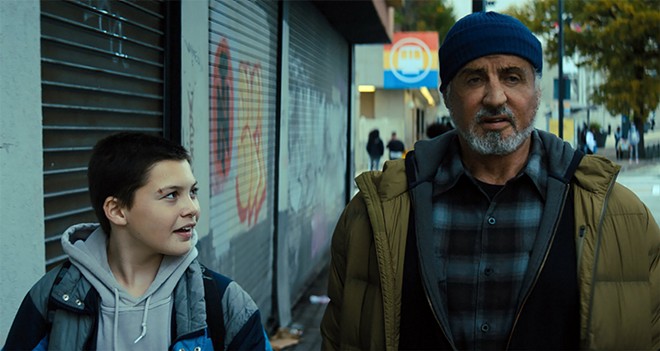 Though it won't be considered a high-water mark for anyone involved, the Amazon Prime actioner Samaritan is a film that ends up being better than it has a right to be. Sylvester Stallone stars as Joe, an unassuming garbage man in Granite City, a crumbling metropolis overrun by crime. Young Sam (a winning Javon Walton) is at a crossroads, tempted to take up the thug life but knowing in his heart this is the wrong path. He's obsessed with the Samaritan, a superhero who, along with his twin brother Nemesis, disappeared years ago in a fiery explosion. However, rumors persist he's still alive, and after seeing Joe perform feats of strength that defy logic, Sam's sure he's found his missing hero.

It's an intriguing concept, one that keeps you hooked amidst the standard mayhem and violence that's part-and-parcel of these films. The chemistry between Stallone and Walton is genuine and a delight to watch, while a surprising third act reveal proves to be a clever turn that logically upends the film in a positive way. No, Samaritan is no award-winner, but it's a pleasant enough timewaster, something to take in on Sunday afternoon when you'd rather just relax than think. Streaming on Amazon Prime.

There's a great deal of confusion in Ben Parker's Burial, a what-if World War II story based on the supposition that Soviet forces found the remains of Adolf Hitler and that a small group of soldiers were assigned to deliver the body to Stalin as proof of his demise. The small detail includes Brana (Charlotte Vega), a fierce sharpshooter, Lukasz (Tom Felton), a conflicted foot soldier and Tor (Barry Ward), an abusive officer, as well as various other troops who we immediately know won't complete the journey.

Infighting over the purpose of this detail as well as a group of German soldiers, intent on retrieving their Fuhrer's remains, provide the conflict of this at times plodding, muddled movie. Far too often, a lack of narrative clarity and low-lit scenes caused me to question who was doing what for whom and just whose side certain characters were on. However, once the film's theme emerges in the end, Parker's intent becomes clear. The notion that an ideology or belief remains powerful if its leader remains, either physically or spiritually, is still a dangerous enterprise. In reminding us of this notion, Burial couldn't be timelier. Available through Video-On-Demand