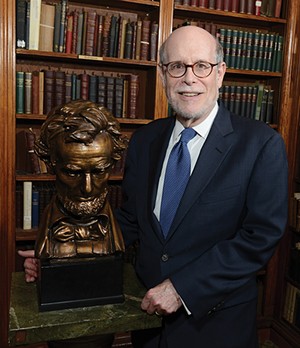 Photo courtesy of harold holzer
Harold Holzer, renowned Lincoln scholar, advises ALPLM: “A commitment to transparency is crucial.”
Eight years after doubts arose, the Abraham Lincoln Presidential Library and Museum still hasn't resolved a question about what was once a centerpiece.

Did a stovepipe hat purportedly worn by the Great Emancipator actually belong to Lincoln? After initially defending the hat's authenticity in response to 2012 media reports, the museum over the years has acknowledged legitimate questions, and the hat is no longer displayed.

A definitive answer might be within reach, but shortly after museum trustees and members of the museum's foundation, which owns the hat, decided to consult with clothing experts, the museum fired the man who came up with a plan to resolve the controversy.

Via email, ALPLM spokesman Chris Wills says that former state historian Sam Wheeler was terminated "for performance." In a December report, Wheeler had been critical of higher-ups at the institution and in the governor's office for demanding that he publish findings before his hat research was complete. In his report, Wheeler wrote that he hadn't been able to confirm the hat's authenticity and recommended that it be examined by clothing and textile experts.

Wheeler first proposed experts in the spring of 2019, but that didn't happen. Asked then to allow an examination of the hat, the foundation said it wanted to collaborate on the research project, according to Wheeler's report, and the matter went no further. Finally, during a July 7 meeting that included museum trustees and members of the nonprofit board, an agreement was reached: Wheeler would find experts to come to Springfield and examine the hat. The Smithsonian was mentioned.

"It's putting a smile on my face," Wheeler declared during the meeting when members of the foundation and museum boards approved his plan. "I love to see this level of collaboration, and it is a story I will tell often."

Eight days later, Wheeler was fired. His dismissal wasn't discussed at a July 15 trustee meeting that adjourned shortly before Wheeler was reportedly escorted from the building.

Nick Kalm, a foundation board member who co-chairs a committee of foundation and museum board members tasked with answering provenance questions surrounding the hat, referred questions about retaining experts to the ALPLM. "That is something that will be decided by them," Kalm said. "He (Wheeler) was the one who was going to be leading that charge. As you know, he is no longer with the state." Museum trustee Kathryn Harris, who sits on the committee with Kalm, said she also doesn't know the next step. "I don't know if other staff in the research collection will continue with his work or what," she said.

Wheeler could not be reached for comment. ALPLM spokesman Chris Wills said via email that the work of the committee established to study the hat's provenance will continue without interruption. The committee has full access to the museum's historians, registrars and conservators, Wills wrote. "The committee has not yet retained experts on clothing or textiles but is working on it," he wrote.

During a May museum board meeting, Harold Holzer, one of the nation's leading Lincoln scholars, told trustees they should resolve the hat question so that the museum can refocus attention on relics with undisputed provenance. "I think the way the media has been treating it, the way the scholarly community has been treating it, the sooner you get the authoritative study and put it behind you, either as an authentic relic, a possibly authentic relic or a non-authenticable relic, the better off you'll all be, to just end it and move on," Holzer said.

The museum is searching for a new director to lead an institution that has had four, not including acting directors, since opening day in 2005. All but one has either been terminated or forced out. Brought in to advise the board on a future course for the ALPLM as it searches for a new leader, Holzer told trustees that the institution should consider replacing exhibits that were state-of-the art when the museum opened and increase space dedicated to displaying artifacts. "I think the time has come to rethink those high-tech displays and think of a new way to present," Holzer said in May. "And I think that a new director should commit himself or herself to that kind of work, assuming the funding can come." Holzer also urged the institution to be more open. "On the press and the public side, I think a commitment to transparency is crucial," Holzer told the board.

While a new director should have a background in American history, Holzer said, Lincoln expertise isn't an essential. Still, the ALPLM should be an authoritative resource for journalists and others with questions about Lincoln, he said. "It would be ideal, if you don't find a Lincoln person, to find someone with a combination of confidence and modesty to punt questions to curatorial voices within the museum," Holzer said. "Embolden them to speak about questions about Lincoln."

"I would say that I have enormous respect for him and for his knowledge and for his dedication," Holzer said. "And I hope that this unwise, ill-advised and inexplicable decision can still be reversed. He's an asset. The library needs every asset that it can get, especially as it embarks on a search for a new director."