Get to know farro 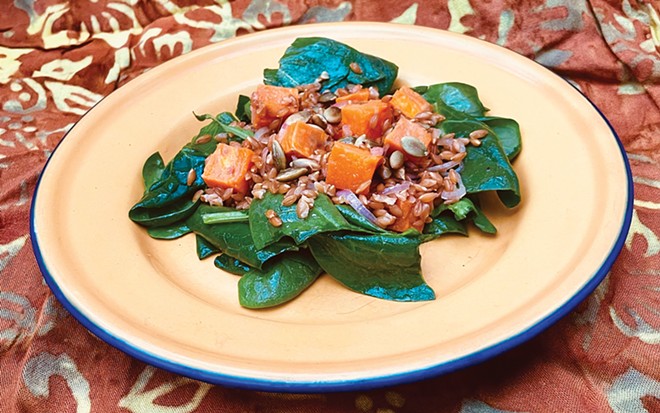 I doubt that I'll ever become a true-blue vegetarian. I just love bacon, a simple roasted chicken and a nicely seared steak way too much to totally eliminate animal protein from my diet. But I am convinced that a predominantly plant-based diet is what I should be working towards. To that end, I'm always looking for new plant-based ingredients to add to my culinary repertoire. Currently I've become enamored with farro.

Farro is the Italian word for an ancient grain that originated in the Fertile Crescent, a sickle-shaped semicircular area of cultivable land on the fringes of the Sahara and Sinai deserts. The Fertile Crescent, considered the cradle of civilization, is the birthplace of dedicated wheat farming. Farro (correctly pronounced FAHR-oh, not FARE-oh) has been found in the tombs of Egyptian monarchs, and was brought to the region that is now Italy by the Roman Legions, where it has been grown for generations by Tuscan farmers and is featured in many traditional dishes.

Farro is one of our oldest domesticated grains, and has been cultivated the same way for thousands of years. Most other commercially available wheat products, by contrast, have undergone genetic manipulation and crossbreeding to increase production and maximize shelf-life. Though not gluten-free, farro is a great way to introduce more plant-based protein into your diet. Farro is part of the Mediterranean diet, an eating style considered to be one of the world's healthiest.

The term farro actually refers to three different types of ancient wheat grains: farro piccolo or eikhorn, farro medio or emmer, and farro grande or spelt. In Latin, farro piccolo is Triticum monococcum, farro medio is Triticum dicoccum, and farro grande is Triticum spelta. Farro piccolo is the oldest cultivated grain, dating back at least 10,000 years, and is the rarest of Italian ancient grains. Emmer is what's sold most often in the U.S. To make matters more confusing, farro comes in three different forms: whole farro (in which the hull or bran is left intact, retaining all the grain's fiber and nutrients), semi-pearled (in which part of the bran has been removed), and pearled (which has no bran at all and has the least nutritional benefit). The pearling process reduces the cooking time and increases shelf-life, but also takes away most of the grain's nutritional benefits. Once the bran is removed, the flavor also goes, and what remains is almost pure starch. In the United States, farro is nearly always sold in pearled form. In Italy, semi-pearled is most common.

Farro is high in fiber and protein, and is also a good source of vitamins, minerals and antioxidants. Farro has the same amount of protein as quinoa, but significantly more fiber, which most Western diets are severely deficient in. Fiber is essential for digestive health. Farro is easy to digest, allowing your body to readily absorb the nutrients. Consumption of whole grains like farro reduces the risk of heart disease, type 2 diabetes and other chronic illnesses.

Farro has a chewy texture and nutty flavor with hints of cashew and cinnamon. It is best cooked al dente. Its nutty flavor can be enhanced by toasting the grains in a dry skillet until fragrant and golden before cooking in liquid. The chewy texture is perfect for salads, soups, stews and grain bowls and is delicious both hot and cold. Farro is an excellent substitute for rice and can be prepared like a risotto. It can be cooked up like oatmeal and served with a dollop of yogurt, nuts and fresh fruit.

As a rule of thumb, for each cup of dry farro, use 2 1/2 to 3 cups of liquid. For pearled and semi-pearled farro, bring the grains to a boil, turn down the heat and simmer covered for about 15 to 30 minutes, until the grains are tender but still chewy. Whole grain farro should be soaked in water overnight to reduce cooking time. When cooking whole-grain farro, begin checking it for doneness after about 25 minutes.

Look for farro in the baking section of your grocery or health food store or purchase online. Popular brands are Bob's Red Mill's Organic Farro, Roland Italian Farro, and Earthly Choice Italian Pearled Farro. Anson Mills, a producer and purveyor of handmade mill goods from organic heirloom grains, sells all three varieties of farro online, and is the only grower of farro piccolo in the United States. Instead of pearling the grains, Anson Mills farro very lightly "scratches" its farro, as is traditional, to allow for a faster cooking time and to encourage the release of their starches during cooking. Because of that minimal loss of bran, it retains full nutritional benefits.

Make the pickled shallots: In a small pot, combine sherry vinegar, water, salt and maple syrup and simmer until the salt dissolves. Remove from the stove, cool a few minutes, stir in the shallots, and set aside.

Peel sweet potatoes and cut into approximately 1/2-inch cubes. Toss cubes in a mixing bowl with 2 tablespoons of the oil. Spread the sweet potato cubes into a single layer on the sheet tray. Season with salt and black pepper. Roast until pieces are tender, about 30 to 40 minutes, turning them over halfway through the cooking time. Set aside to cool slightly.

While the sweet potatoes are roasting, cook farro in a large pot of simmering salted water according to the directions on the package, until the grains are tender but chewy, usually about 15 to 30 minutes. Drain and cool.

In a large bowl, mix together the roasted sweet potatoes, farro and pickled shallots (including their pickling liquid). Toss with the remaining 3 tablespoons of oil. Taste and adjust seasonings. Garnish with the toasted pumpkin seeds and optional cheese. Salad keeps in the fridge for up to a week.

Since the start of the pandemic, Peter Glatz has been living and traveling and working remotely in a converted school bus with his wife and dog.