Get the lead out of drinking water 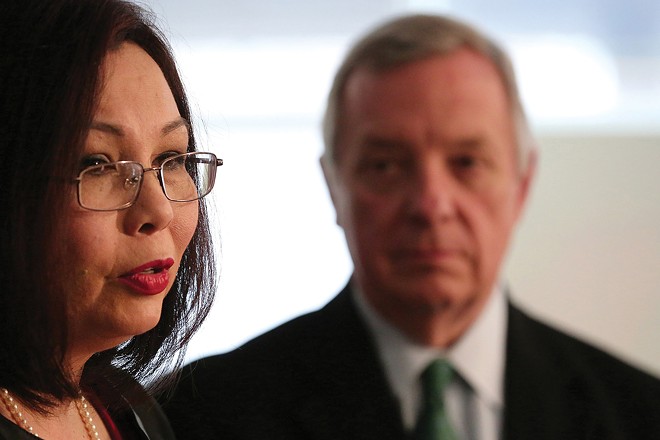 Bipartisanship might seem like a quaint notion, but every so often we see it in real life. Late last month, the Senate voted 89-2 to pass Senator Tammy Duckworth's Drinking Water and Wastewater Infrastructure Act (DWWIA) of 2021, which authorizes five years of funding for our public water systems and expands programs to address lead remediation in homes and schools.

Rightly, this bill will not further the control of private water companies like Aqua Illinois and Illinois American Water, which already gouge customers with rates 20-60 percent higher than publicly managed water systems that provide Lake Michigan Water, according to a 2017 Tribune investigation.

Passing DWWIA is a good first step towards a desperately needed, large investment in our water systems to ensure that every single person in communities across Illinois (and the country) has access to clean, safe, affordable, public drinking water. With President Biden pushing a comprehensive infrastructure bill, we have a huge opportunity in front of us to fully and permanently fund our water systems.

The EPA estimates that we need to invest at least $35 billion every year in order to meet current drinking water quality standards. And due to the economic crisis caused by the pandemic, people across the country are over $8 billion in water debt. Senator Duckworth chairs the water subcommittee, and as Majority Whip, Senator Durbin is the second highest ranking Democrat. They both know that our communities in Illinois cannot afford a compromise on safe, affordable water.

They know that Illinois has more lead water pipes than any other state in the country, and Chicago the most of any other city. A Tribune investigation found dozens of homes in our state between 2015 and 2020 that had lead levels just as dangerous as what researchers found during the same period in Flint, Michigan.

Our senators have surely met constituents struggling to afford their water bills; in Northeastern Illinois, the average monthly water bill nearly doubled from 2008-2018. From 2007-2019, Chicago issued nearly 150,000 water shutoff notices, and nearly 40 percent of those were in five of the poorest ZIP codes on the south and west sides. Chicago has paused water shutoffs and a proposed Water-for-All ordinance would outlaw shutoffs permanently and work to provide affordable, publicly controlled water for all.

Elsewhere in the state, private water companies are serving shutoff notices to families financially struggling due to the pandemic because the water shutoff protections for certain low-income households expired on April 1. According to state filings, Illinois American Water has shut off nearly 15,000 households, an estimated 38,000 people, since last October through the end of March.

Water is a human right, and one of our most basic necessities. Senators Durbin and Duckworth must know the suffering caused by contaminated or unaffordable water, and that's why we need their leadership to fully fund our water systems by including the WATER Act (S. 916) in the upcoming infrastructure negotiations.

The WATER Act would create a permanent water trust fund with enough funding to ensure that everyone in our state has access to affordable, safe drinking water. Illinois alone would get $1.3 billion every year to put towards upgrading our water systems, remediating dangerous pollutants, and ensuring that water is accessible for everyone. This massive investment in our water would create roughly 22,000 good union jobs in our state and generate nearly $4 billion in spending which will help us recover from the pandemic-induced economic downturn.

The WATER Act would give communities across our state and country resilient, accessible water systems that would provide clean, safe, affordable, public water to all. That's what Illinoisians need and deserve. This pandemic has served as an urgent reminder that without water, it's next to impossible to wash your hands, cook, clean or do laundry. A house isn't a livable home without it.

There is once-in-a-generation political momentum behind finally addressing our cross-sector infrastructure crises in this country. Senator Duckworth and Senator Durbin should seize the opportunity to meet our needs on something we all need to survive – water – by including the WATER Act in the upcoming infrastructure spending bills.

Zhenya Polozova is a regional organizer with Food & Water Watch who organizes in support of universal water access, a just and fair transition to renewable energy, and a ban on fracking. Food & Water Watch mobilizes people to build political power to address the most pressing food, water and climate problems of our time. The organization works to protect people's health, communities and democracy from the growing destructive power of the most powerful economic interests.

In a democracy, voters deserve a choice