Having made a film about a youth gang leader in Johannesburg (Tsotsi, winner of the 2006 Oscar for Best Foreign Film), a questionable interrogation process used by the United States (Rendition), a rogue superhero (X-Men Origins: Wolverine) and a child prodigy whose psychic abilities are corrupted by the military (Ender’s Game), one would think that there’s nary a thematic thread running through the work of director Gavin Hood. However, the protagonists in these disparate movies are all pushed to the edge, each forced to make moral decisions that will not only impact themselves and those around them, but have a ripple effect that will affect them and their respective societies long into the future.

Hood’s latest work, Eye in the Sky is no different.  Looking at the nature of modern warfare, the film unfolds in four separate locations – a military center in Surrey, England, a high-level cabinet meeting in London, a drone command outpost in Las Vegas and a hot zone in Nairobi. What with no soldiers on the ground and any destruction being done remotely through drones, this brand of combat has a far less visceral, more sterile feel about it. However, as the movie powerfully points out, modern technology hasn’t succeeded in wiping out the emotional impact those who do our dirty work must contend with.

Photo by Dann Gire
Director Gavin Hood, in Chicago recently, to discuss "Eye in the Sky."

In Chicago recently to promote the film, Hood sat down for a long, wide-ranging conversation about the making of Eye and the talent he had at his disposal to bring it to the screen. I asked the director if he had any cooperation with the British Armed Forces in the making of the movie. Surprisingly, he said, “Well, we have to show them the script to make sure that there’s nothing in it that’s inaccurate,” he said. “They didn’t object to anything that was there. But what was really eye opening is when we spoke to drone and F-16 pilots who are still serving. They gave us insight as to what really happens in these life-or-death situations that was invaluable, especially where the cast was concerned, particularly Aaron Paul.”

The Breaking Bad alum plays Steve Watts, an American pilot who has the final say-so where dropping the drone’s payload is concerned, as the simple search-and-apprehend mission he’s involved with escalates to one in which his aircraft’s explosive payload must be deployed. The ethical battle he struggles with, when he realizes many civilians will be killed or injured if the drop is completed is just one of the many thorny moral issues the film tackles.  While there’s no question as to the nature of the people being targeted – as they have criminal pasts and are seen preparing for a potentially devastating terrorist attack - the price of taking them out weighed against the collateral damage that would ensue is something every one in the film’s chain of command must consider. 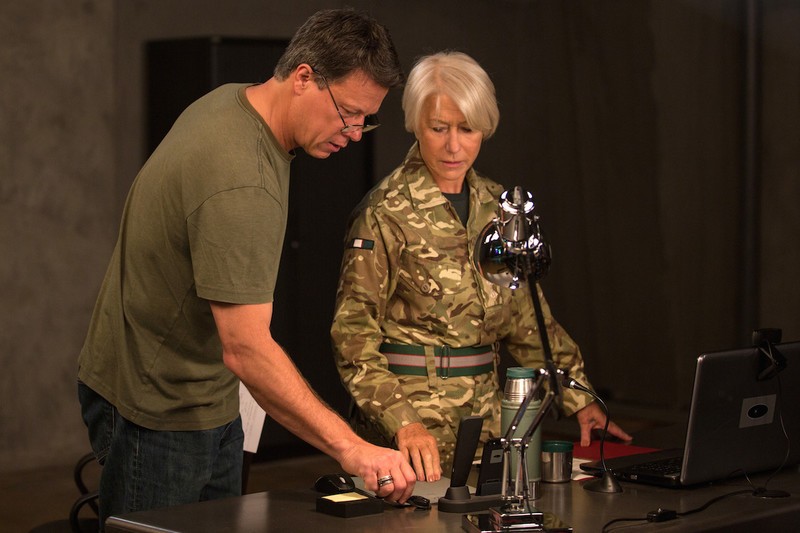 One of the most frustrating elements in Eye is seeing how no one in the chain of command – or as it’s referred to now, “the kill chain”- wants to take responsibility where making a final decision is concerned. Everyone in the film refers to their superior until no one is left to ask.  I asked Hood about this, saying I had never seen this portrayed in a film before. “We live in such a different age in which there’s greater connectivity.  Everyone is under the microscope right now.  Everyone is watching what the other person is doing and no one wants to end up holding the bag.  It is remarkably frustrating but in situations like this we need as many oversights as we can get so that the truth of what happens is apparent.  It really is a double-edged sword.”

In addition to Paul, Hood’s cast included Helen Mirren as Colonel Katherine Powell, who is spearheading the operation, and Alan Rickman in one of his final roles as Lt. General Frank Benson, her liaison with the Secretary of Defense and ultimately the Prime Minister.  When I asked about working with such talented veterans, the director pointed out that Mirren’s role was originally written for a man. “I didn’t want to turn this into another war movie where it comes off as just a boy’s club. And with Mirren, she brings such strength yet subtlety to everything that she does that I knew that she would be able to convey the character’s rapidly changing emotions in a kind of shorthand that would be apropos of a person who had devoted her life to the military.  Not only is she immensely talented, but I hope that her presence will broaden the appeal of the movie to a broader audience. I want this film to appeal to both men and women.” 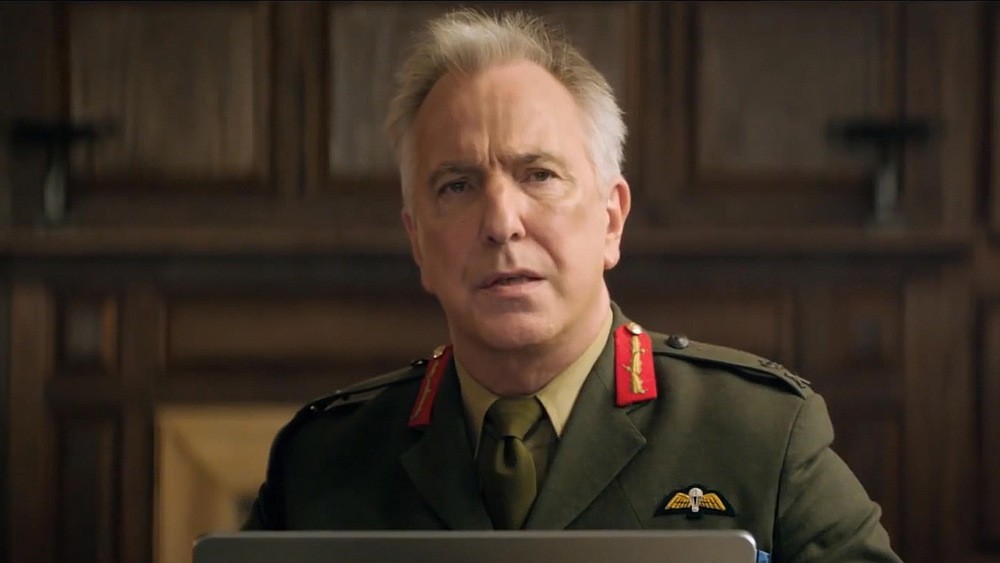 Courtesy Bleecker Street Media
Alan Rickman in his last on-screen performance in "Eye in the Sky."

As for Rickman, Hood said, “You know with performers like Helen and Alan, you really just step back and let them work.  We were so lucky to have him on the film and I was honored to work with a man of his talent.  He had a sense of off-brand humor that was so disarming and he was so crucial to this movie turning out as well as it did.”

While working with his cast may not have posed a challenge, coordinating transitions between four distinct locations presented its own set of difficulties. “What viewers won’t realize is that much of what they see during Helen’s scenes were green screen effects,” he points out. “All of the images she responds to regarding what’s happening at the mission’s location in Kenya were put in latter so that’s another testament to her skill as an actress.  However, what I had to be mindful of was keeping a certain consistent rhythm and pacing between the four settings, as the whole point was to build suspense.  Yes, I want to make a point with the film but I also want to have your heart racing and get viewers to the edge of their seats.”

Eye in the Sky succeeds in both of these arenas as it not only lays out the complexities of modern warfare without casting dispersions in any one direction but it effectively puts the audience in the shoes of each of its key protagonists, forcing us to contemplate what we would do if we were in their situation. As Hood points out, “Drone pilots suffer from twice the amount of PTSD than regular pilots because they’re forced to examine what they’ve done.” Were those further up the kill chain required to do the same, perhaps the call to strike with lethal force wouldn’t come as easily or often.