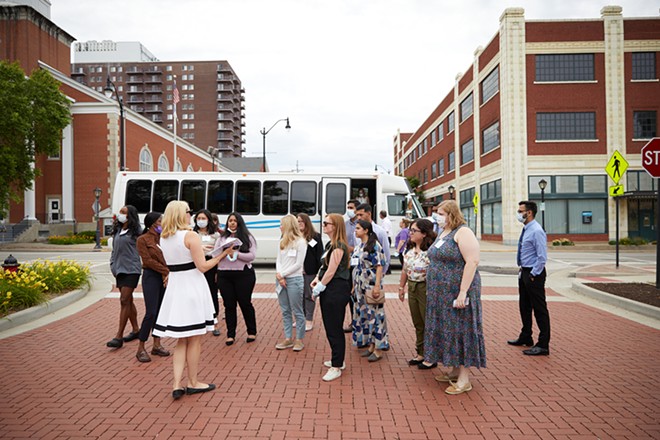 PHOTO BY BEN ROMANG
Dr. Meredith Volle speaks to a group of medical residents during a tour stop downtown.

As they drove around Springfield in tour buses, about 70 doctors-in-training saw  distressed neighborhoods and an abundance of dollar stores. They also noticed a dearth of supermarkets, creating what are known as "food deserts" in certain parts of the community.

The young doctors – smartly dressed, smiling, energetic and mostly slim – were about to begin medical residencies in early July that last three to seven years through Southern Illinois University School of Medicine.

The June 24 bus trip was the first of its kind in the area and organized through the Springfield-based medical school's Department of Population Science and Policy. It was all part of an ongoing effort at SIU to deepen doctors' understanding of the "social determinants of health" early on in their careers. That way, they can better meet their future patients' needs – in central Illinois or elsewhere, SIU officials said.

Studies indicate that only 20% of a person's overall health is determined by what goes on in a doctor's office or hospital.

And the other 80%? That share is influenced by factors such as economic and family stability, racism, pollution, crime, housing, education levels and access to both healthy foods and physical activity, according to Dr. Meredith Volle, an SIU pediatrician and education director of population science.

Volle, 35, a Springfield native and 2004 Springfield High School graduate who completed medical school at SIU in 2016 and her SIU residency in 2019, acted as tour guide inside one of the three buses on the two-hour tour.

She told Illinois Times that more knowledge about the challenges patients face can make doctors – who tend to come from middle- and upper-income backgrounds – more empathetic and wiser in how they prescribe treatments and medicines. Doctors also may be more likely to pick up on cues and link patients to social services, she said.

"I'm a pediatrician, so I can write a prescription for diaper rash, but if the parents don't have access to diapers and wipes, that's a problem," she said. "We need to be using our position of privilege to advocate for our patients."

Patients who must use public transportation and transfer buses one or two times to reach a doctor's appointment sometimes may be late or miss the appointment altogether, she said.

Educating doctors about the hardships patients may face can make them less likely to judge patients who may not comply with doctors' orders or seek non-emergency care in a hospital emergency room, Volle said.

"The social determinants of health are really what predict health outcomes, and if we only focus on training doctors in the quality of care that they deliver and not the access to care, we are never going to be successful in changing outcomes for our entire population," she said. "That's the entire goal of SIU – to improve the lives of the people in central and southern Illinois."

SIU officials say Springfield's status as a regional hub for medical care hasn't equated to good health outcomes for everyone.

For years, those at SIU, Memorial Health, Hospital Sisters Health System and the Sangamon County Department of Public Health who track the health of the population have pointed to the nationwide County Health Rankings & Roadmaps reports.

Gaps pointed out in previous years continued in the 2022 report. Sangamon County ranked eighth out of the 102 Illinois counties when it comes to the availability of high-quality clinical care but 66th in "health outcomes" measured by levels of premature death, poor mental and physical health and low-birth-weight babies.

Volle told the incoming medical residents before they all got on the buses that residents are "really special to the community" because they provide direct patient care throughout their residencies in clinics and hospitals.

Some decide to stay in the area after their training is complete, she said.

During the tour, Volle pointed out where a Shop 'n Save and Aldi used to operate along North Grand Avenue. The Dollar General stores and other dollar stores that are more numerous than supermarkets, especially in some low-income neighborhoods, offer limited food choices and lack fresh fruits and vegetables, she said.

For medical residents from New Jersey, South Dakota, Ohio, Maryland and New Mexico, Volle enumerated the high-calorie and high-fat components of Springfield's famous horseshoe sandwich as she gestured toward Prairie Heart Institute at St. John's. It's one of the largest programs for the treatment of heart disease in Illinois.

The residents visited the county health department at 2833 South Grand Ave. E., where department director Gail O'Neill told them, "We're a blessed community" because of the medical care and social services available.

O'Neill said her department offers everything from immunizations to the Women, Infants and Children (WIC) program and Narcan for intervening in opioid overdoses.

Volle said SIU's main goal with the tour "was not to focus on negative aspects of Springfield, but to understand the disparities that need to be recognized and addressed more effectively in order to positively impact health outcomes.

"Springfield is a wonderful place to live," she said. "We are all better doctors because the people of Springfield allow us to care for them."

Dr. Emilie Lohman Irwin, 31, a first-year emergency medicine resident who graduated from Pleasant Plains High School in 2009, took the bus tour even though she is familiar with the community.

"For people from outside of Springfield, it gives them an opportunity to see how different certain parts of the city are," she said.

Some residents from other states said they considered Springfield rural, while others considered the community more urban, according to Volle.

The bus tour was even more important as the COVID-19 pandemic continues. Many incoming medical residents hadn't visited Springfield before they traveled here to start their residencies, Volle said. The pandemic prompted SIU departments to conduct online video interviews, instead of in-person interviews, to select this year's incoming residents, she said. 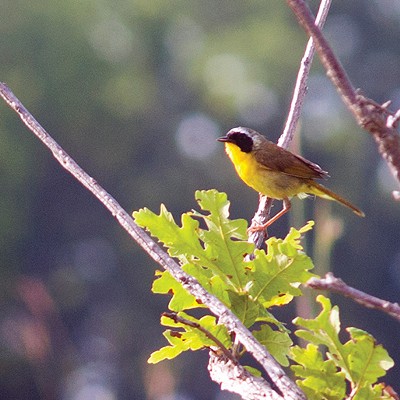