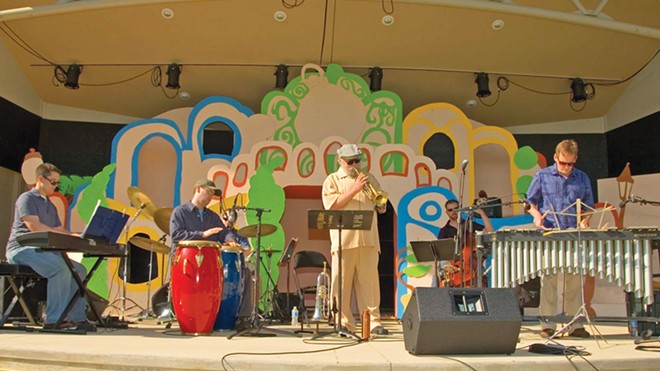 
Welcome to the first full weekend of February in 2020, and it's chock full of fun fantastically formed to fulfill your most fabulous, not at all fallacious, fantasies of a fine time.


Let's get right to it as we have lots to cover. Thursday gives us a couple of stellar Springfield acts that surely set the tone for the weekend with their proven longevity and profound musicianship in our music scene. Frank Parker, with his ubiquitous trumpet in hand, hosts his Jambalaya Jam downtown at Buzz Bomb on this, the first Thursday of the month. Frank invites all comers to join in jamming at the Bomb, especially playing tunes relating to jazz and blues of the New Orleans style, since the Crescent City is Mr. Parker's stomping ground and Mardi Gras is lurking nearby. Out west at Pease's at Bunn Gourmet, Lowder & Manning, aka, Jaigh & Jill, bring years of songwriting brilliance and astute music-making to the bar/restaurant that wonderfully continues to offer live music to the west side. Expect above par songs on the original side of things paired with fine, finer and finest guitar playing all done so well you will wonder how they do it and do it consistently. Well, they're just good, that's all.


Friday night is a pure monster night of entertainment, and to prove it, let's hang out downtown for three supreme acts gigging within blocks of each other. First, Kevin Hart & the Vibe Tribe (Mike Nellas, guitar; Brandon Mooberry, bass; Tom Marko, drums) land at Robbie's (5:30-7:30) for a display of jazzy vibraphone playing, the likes of which you've never seen, unless of course you've seen the award-winning, nationally renowned Kevin play before. Down around the corner at Craft Beer Bar (the place is for sale, btw) starting about 8, catch the up-home jams of the Jay Larson Band and experience some real rock classics that you don't usually get to hear in this town. Over at Anchors Away, Kevin Ellis and Groove Orbit lay down some mighty groovy grooves to keep the moves a-moving all night long, all based around the sweet bass of KE just doing it to it. Now let's move up north on Route 29 where in the cool band department it's hard to beat the Shenanigans as they arrive to kick off the return of live music to Long Bridge Golf Course while celebrating Michelle Burkett's birthday. On the other side of town, the Curve Inn sets up for a BROSEPH show with special guests Exit 52 for a night of quite wonderful music on a grand scale, or as they say more pointedly in their Facebook event, it's "gonna be a helluva night." Then, over on the near west side, the Trading Post Saloon welcomes back Astrofix to play a night of original rock music as only Jamie and the guys can provide.


If you've got time on Saturday, start early with a visit to 1854 Pub in Pawnee for Andrea's Boozy Brunch (starts at 10) and those Guilty Boys (and indeed they are) 'fessing up at noon. Hang on until evening time as a couple of Mississippians paddle into town as Mississippi Leghound knocks off George Ranks while Mississippi Jake takes on Buzz Bomb. Coincidence? I think not. Keep at the task of digging the live music as the Suburban Mystics musically mystify at Guitars & Cadillacs, Harmony Deep digs into the Blue Grouch and Smoothtimes Band slides by Third Base. For acoustic action, Matt Mifflin moves on Motorheads, Jeff Berendt pleases at Pease's and Ben Morgan makes it at Locals in Pawnee.


And that's that for now.