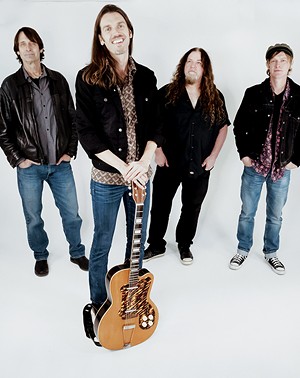 Ivas John Band plays the ICBC BluesFest at Third Base on Sunday evening.

Now here we go, approaching mid-September already like this year's in a hurry or something. Maybe we're just making up for lost pandemic time, but whatever the case may be, here we are ready to see and hear what the week has to offer in music entertainment on the Springfield scene.

First and foremost, let's help a brother out as we gather this weekend to come to the aid of drummer and all-around good guy, Tom Summerlin, who is going through all the cancer crap. Folks are calling it "Tommy's Weekend,'' and it starts at KooKoos2 with a Bike Run at noon and goes on with Rockhouse rocking the house from 6 to 8 p.m. Tommy's Weekend continues at the Curve Inn on Sunday from noon to 6 with his friends in several bands including Rox School, Bad Grandpas, Rick Mari Band, Hip Bone Sam and the Sleepin' Dogzz joining in to help out the cause. Donations can be dropped off at any UCB location and Sunday will include a silent and live auction. Jimmy Bonefeste will be your emcee and point man for getting the thing done. Help out if you can, and come to the aid of a musician in need.

Thursday evenings are off the charts lately with all kinds of live music, including the continuing series, The Art of Jazz, at The Pharmacy, curated by Jose Gobbo and featuring different artists playing weekly while you peruse the artwork on display and for sale. Then there's Mandi Strachota rolling into Buzz Bomb on her nationwide run called the Secret Taco Tour, going from Tennessee to Arizona by way of Wyoming, California and of course, Springfield, Illinois. Plus, Brandi Kristin brings it on at Weebles, Grounded lands at the Curve Inn, Dan Rivero Band drives it at Casey's Pub, Me, Myself & Schy testify at Boone's, Tom Beverly and Geoff Ryan do it up at Pease's at BUNN Gourmet and there's an open mic going on at the Blue Grouch. How about that for a measly old Thursday night in Mr. Lincoln's hometown?

I hope you're ready for the second September Oktoberfest in as many weeks as our friends at Buzz Bomb Brewing Company are putting on a party on Adams Street this Saturday starting a 3 o'clock in the afternoon and going until the Holsteins come home about midnight. Since they rock as a brewery, there will be several different kinds of awesome Oktoberfest-style beers from Buzz Bomb and other invited fellow breweries, plus they roll as a cool venue, so there are several bands playing including Black Tarpoon, Wayward Motel, Attic Salt, The Ex-Bombers, Blue Ribbon Revival and Buzzard Fight, with an after show by the Calamity Cubes. Along with all the beer and music, expect an overflowing stein of a good time with games, kids' activities and food. Here's a German slang phrase that should express the proper emotion upon learning about the event: Wie geil ist das denn! Or at least I hope so.

Let's hop over to Third Base Sports Bar on Sunday when the Illinois Central Blues Club hosts its autumnal extravaganza, Fall Blues at the Base Fest. There are not one, not two, but three superb blues groups of varying styles playing, including The John McVey Band (3-5 p.m.), The Smokers Blues Band (5-7 p.m.) and The Ivas John Band (7-9 p.m.) with proceeds from the day's festivities going to the ICBC to help with all the good work that they do doing the work of promoting the blues.

Now if that don't do it, I don't know what will.