My adventures with spores, molds and fungus

When folks ask me what I do at my new job, I like to steal a line from Egon Spengler (played by the late Harold Ramis) from the 1984 movie Ghostbusters: "I collect spores, molds and fungus." I'm working in the glass-encased, high-tech Research and Development Lab of Chef Sean Brock's Audrey and June Restaurants in Nashville, where we use a mold called koji to miraculously transform traditional Southern ingredients into something tastier and more nutritious, all the while minimizing food waste.

In an interview for the Robb Report, Chef Brock explains the mission of the R&D Lab: "We want to explore the possibilities of our ingredients in ways that we haven't been able to in the past. We start by asking ourselves these questions: How far can we push the natural flavors of Southern ingredients? What traditions haven't been discovered with our ingredients by focusing on creativity and curiosity? How can we push ourselves to concentrate the natural flavors so we can create and present dishes in a minimalistic fashion? How do we unlock hidden flavors by utilizing new technologies like our solventless extraction microwave and ultrasound extraction units? We must first push ourselves to do something we have never done before or even witnessed elsewhere."

My first month on the job has exposed me to a dizzying array of new concepts and terminologies. Though I'm pretty well versed in the principles and applications of lactic-acid fermentation for preserving food and creating new flavors, my experience working with the culinary alchemy of koji mold is very minimal. It's been quite the challenge to sort through all the different ways this mold can transform common ingredients. This week's column will focus on the basic principles of working with koji and categorizing its resulting products.

Koji mold or Aspergillus oryzae is a filamentous fungus that has been used for thousands of years in East Asia to transform grains and legumes into such things as sake, soy sauce and miso. The koji mold forms hyphae which grow over the surface of a food source and secrete a host of different enzymes in a process called extracellular digestion. These enzymes predigest the food source so that the hyphae can easily absorb the nutrients the mold needs to survive. For culinary purposes, the two most important enzymes produced by koji are protease, which breaks down proteins into amino acids, and amylase, which breaks down complex carbohydrates into simple sugars.

Amino acids are the primary sources of umami, that hard-to-define "fifth taste" which roughly translates as "deliciousness." When we inoculate legumes and grain proteins with koji, the proteins are broken down and the amino acids are released. One amino acid in particular, glutamic acid, is most closely associated with umami. When glutamic acid is bound up in a protein, it is flavorless. To be tasted, the protein needs to be broken down to liberate its amino acids. This is the magic of koji.

The enzymes produced when koji is grown on cooked grains can be harnessed and used to break down other proteins. The basic process is to steam either rice or barley, inoculate the grain with Aspergillus spores, and put the inoculated grain into a warm, humid place for a few days. The result will be grain covered with a fine white mold whose enzymes can then be used to autolytically break down other starches and proteins. This is how sake, soy sauce, miso and many other products are made.

The list of things that can be made with koji is vast, and because the process has Asian roots, getting a handle on terminology and its taxonomy can be a bit daunting. And to further add to the confusion, some of koji's products result from a combination of enzymatic-driven transformation from the koji mold and microbial-driven fermentation from lactic-acid and other bacteria. What follows will be my attempt to provide clarification.

Amazake is a sweet fermented non-alcoholic rice drink made from cooked starch (rice or barley), koji-inoculated starch and water. Amylase, one of the enzymes produced by koji, breaks down the grain starches into simple sugars. Amazake is the base for sake and rice-based alcohols, rice vinegars and mirin.

Shio koji is a liquid or paste made of koji-inoculated rice and salty water. Shio koji is a powerful short-term protein marinade used to make food more delicious by coating and infusing pieces of food with protease which liberates tasty amino acids from the proteins it comes into contact with. Marinating a piece of meat in shio koji will increase umami and enhance browning. It can also make fruits and vegetables such as tomatoes more flavorful.

Amino pastes include miso and gochujang. Amino pastes can be made from any food or ingredient high in protein. Koji and salt are mixed with a protein source and allowed to age. Amino pastes can be used as a base for soup (miso soup), salad dressings and as a marinade. Try mixing a teaspoon to a tablespoon of amino paste into a pan sauce, or coating vegetables before roasting.

Amino sauces include soy sauce (shoyu in Japanese), tamari, kecap manis and fish sauce or garum. The difference between an amino paste and amino sauce is the amino sauce's higher water content. Higher water content makes the koji enzymes more accessible to starches and proteins. Soy sauces are made from both wheat and rice and are not suitable for gluten-free diets. Tamari was originally a byproduct of miso-making; it is the liquid that forms as the enzymes start breaking down the proteins. It is a good alternative for people who are gluten-intolerant. However, some commercially-produced tamaris contain wheat, so buyer beware!

As my journey through the intersection of gastronomy and bio-technology continues, I will be sharing ideas that can be put to use in the home kitchen. It is my hope that these tips will help you create food that is more delicious and nutritious, with minimal waste. 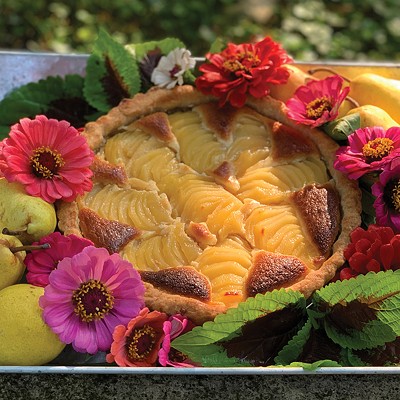