Former cop is now a felon 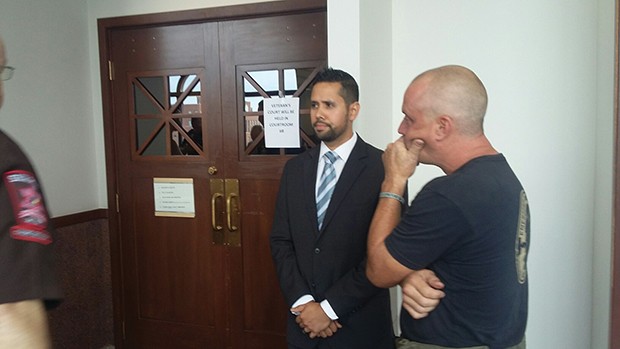 Photo by Bruce Rushton
Rosario waits for the verdict outside the courtroom.

The most dramatic part of the trial came when the judge asked Samuel Rosario if he would testify. The former Springfield police officer stared into space for the better part of 30 seconds before saying that he would not.

From a legal perspective, it was the right call, but Rosario looked like a man who had a lot to say. And so I was glad when he called, five days after a jury convicted him of battery and official misconduct for pummeling a mouthy youth. Body cam footage has gone viral.

“Watching that video is just as ugly to me as it is anyone else,” Rosario says.

The story didn’t begin on Feb. 27, 2017, when Rosario tangled with Robert Humes, who hurled insults almost from the moment the officer arrived to investigate a damage-to-property complaint. “It actually starts a year prior to that, in July or August of 2016,” Rosario tells me. Once an infantryman who saw combat in Iraq, Rosario says he started drinking heavily and having problems with his wife. “I was in such a dark place that it was time to get out of that dark place,” he says. “There’s a lot of bad thoughts that you get when you’re going through that kind of stuff. I was trying to get better. So I went to a psychiatrist.”

Diagnosed with depression and post-traumatic stress disorder, Rosario, who joined the force in 2015, was prescribed Sertraline, an antidepressant, and was sent out each day to serve and protect. He wasn’t a perfect cop – even before the fight with Humes, he’d shown flashes of temper -- but he had his moments, like the time he answered a call and found a mother who didn’t want her baby anymore. The child was filthy. Mom, he remembers, considered the infant an inconvenience. “It broke my heart,” Rosario recalls. “I don’t remember going to any kind of training to deal with anything like that.” Rosario brought the child to the police station, where he removed the child’s dirty pajamas and soiled diapers, then gently cleaned her from head to toe, an act that impressed a lieutenant who was harboring doubts about Rosario, according to internal affairs files.

Despite psychiatric care, Rosario says his mental condition spiraled. He moved out of the family house. “I’ve been in some pretty tough situations, down range overseas,” he says. “I feel pretty tough. I’ve been told I’m pretty tough. I’d never felt so much anger and hate, really directed at the world, no one in particular.” He didn’t hide his troubles. IA files show that he’d told supervisors the day before he encountered Humes that he and his wife weren’t getting along. “I told them I was having problems at home, my life isn’t good and I’m struggling – that’s exactly what was said,” Rosario recalls. “Then I signed my car out and went to work. … I don’t know what else I could have done other than say, ‘I’m not going to work today, I quit.’ I would love to read you the general order for how to deal with an officer who is unfit for duty, but there isn’t one.”

Whether the city could have controlled a lit fuse who now says he wasn’t fit for duty is the subject of a federal lawsuit Humes has filed against the city. His position has changed since the night of the incident, when Humes told Rosario “It’s cool” when the officer returned to apologize and later told commanders that Rosario deserved a promotion. There wasn’t much physical damage, and Humes didn’t testify last week. The jury acquitted Rosario of a battery count alleging bodily harm, which isn’t defined in statute and which jurors, despite photos showing slight red marks on Humes, didn’t see. Official misconduct, a felony, was an easier call. All prosecutors needed to show was that Rosario had knowingly broken the law while a cop, and body cameras did all the work.

Rosario says that things could have turned out worse. “In the place that I was, I was either going to kill someone else or kill myself,” he says. “There was nothing good that was going to come out of where I was.”

If anything good comes from this, Rosario tells me, it should be a recognition that cops, like anyone else, can suffer from mental illness and there needs to be a better way for police departments to spot and help officers who struggle on the inside. “Police officers are not above the law – I don’t disagree with that,” Rosario says. “But they also are not above anyone else. We’re human, just like everyone else, and we make mistakes, just like everyone else, and we have flaws, just like everybody else. If someone can recognize that this was more than just someone coming to work and having a bad day, maybe we can help other officers.”

Rosario doesn’t disagree when I tell him I don’t think he’s cut out to be a cop, but I don’t think he’s felon material, either. John Milhiser, who was Sangamon County state’s attorney when the fight occurred, considered handling the case in veterans court, a diversion program not unlike drug court where charges can be adjudicated short of felony convictions. Dan Wright, who became state’s attorney last year, went a different direction. He declined comment when I mentioned that a prosecutor’s duty is to seek justice, not just convictions, and asked him to talk about his reasoning in how he handled the case – stick with my emailed statement, he said. “We are satisfied with the jury’s verdict,” Wright wrote. “The defendant was held accountable for his actions which do not in any way reflect upon the hard-working men and women of the Springfield Police Department who risk their lives every day in service to our community.”

Sentencing is set for Nov. 1.