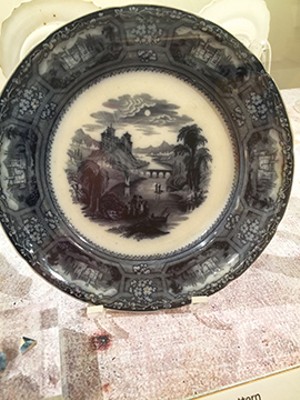 A plate found in an archaeological dig at New Philadelphia currently on display in the Bicentennial exhibit at the Illinois State Museum.

Picture what life was like in the 1830s in western Illinois near the Mississippi River. Although the Northwest Ordinance of 1787 prohibited slavery in the area that became Illinois, residents could keep their current slaves. Across the river in nearby Hannibal, Missouri, slavery was part of the lifestyle. Buying slaves was considered an “investment.” In the 1830s Mark Twain’s father leased slaves as servants to others in Hannibal to make money.

So for an African-American slave in Kentucky to buy Illinois land in 1830  just 20 miles away from slave-owning Hannibal seems remarkable. A year after the land purchase he founded a town. This town, in Pike County near Barry, Illinois, 80 miles west of Springfield, was called New Philadelphia, the new City of Brotherly Love. New Philadelphia was the first town in the United States founded by an African-American, Free Frank. He later earned the name Frank McWorter through a law he, himself, got enacted in Illinois.

In their book New Philadelphia, Frank McWorter’s great-great grandson, Gerald A. McWorter, and his wife, Kate Williams-McWorter, a professor emeritus and associate professor, respectively, at the University of Illinois Urbana-Champaign, chronicle the amazing story of Frank, his family and the history of the town that today is a National Historic Landmark.

Frank was born in 1777 in South Carolina to a slave and her owner, George McWorter. George owned his son and never freed him. When Frank was 19, McWorter took him to Kentucky and put him in charge of managing a farm. It was here Frank met his future wife, Lucy, also a slave. They married, had four children – all born into slavery. Through Frank’s hard work and the processing of saltpeter, he made money. Saltpeter was needed to make gunpowder, and when the War of 1812 broke out, the demand for saltpeter increased.
New Philadelphia was an official town from 1836 to 1885. The authors of New Philadelphia have divided the story of the area into five stages, and weave the story of Free Frank and his family throughout. In stage one, “Native America,” they provide the history of Indians who had fought in the area, such as Black Hawk. Stage two, “Family,” tells of Frank’s and Lucy’s backgrounds, their journey from Kentucky to Illinois, and their work in settling the town. In stage three, “Town,” we learn of the settlement itself, from Frank’s platting of lots, the people, both black and white, and their various occupations. Stage four, “Settlement,” covers the time after 1885 when the town lost its official status and people started moving to nearby Barry. And, Stage five, “Rebirth,” recounts the many archaeological digs, some led by the Illinois State Museum, and the people who have committed time and money to ensure New Philadelphia is not forgotten. The University of Illinois Springfield, the Abraham Lincoln Library and Museum, and others have been involved in the work. Plans to make New Philadelphia a national park are being studied.

The authors also tell the stories of some of the family members (one living to be 106). The narration never drags, helped along with excerpts from letters, court records, and many pictures. The 122-page book is chock-full of interesting information. 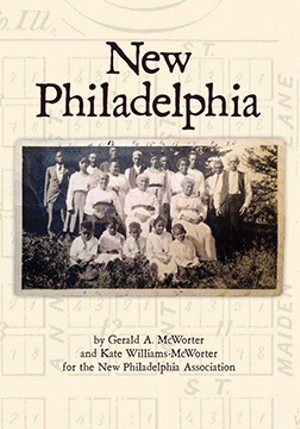 New Philadelphia was a hub for the area. Racial disputes didn’t exist. Blacks and whites worked together, children attended the same schools, and the people believed in equality and anti-slavery.

Throughout the book, though, there is evidence of underlying racial tension. It seems clear that the town was purposely left out when railroads were expanded. The authors write, “Without leaving a single bit of evidence, the company made a decision to avoid New Philadelphia…. Archives of the railway…do not mention the town, although they do mention other places along the route…. The detour cost the company money…. The railroad did not pass through any other town by detouring… Moreover, the Walker and McWorter families each gave permission to traverse their farmland.”

The authors have included three lists: members of the 1836 New Philadelphia who have donated to the New Philadelphia Association, student archaeologists who helped with the many digs, and items from New Philadelphia that are now in the Smithsonian Museum of American History, on loan from the Illinois State Museum.

New Philadelphia is worth a read, not only for its interesting stories, but also for the amazing determination of Frank McWorter and others.

Race in the world of sports

Ditch the diets, just cook your own food