Try this "love in a dish" for Valentine's Day 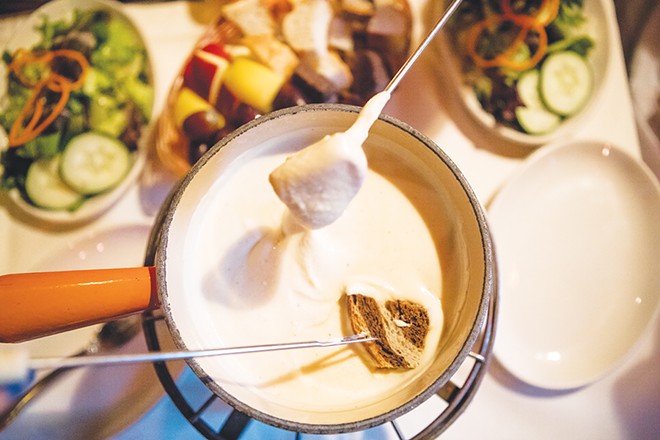 In her essay Love in a Dish, the renowned American food writer M.F.K. Fisher wrote about the importance of couples eating together. "There can be no warm, rich home life anywhere else if it does not exist at the table, and in the same way there can be no enduring family happiness, no real marriage, if a man and woman cannot open themselves generously and without suspicion one to the other over a shared bowl of soup as well as a shared caress." She referenced Jean Anthelme Brillat-Savarin, the French gastronome and author of The Physiology of Taste who wrote about the importance of gastronomy in love, and suggested that happiness at the table leads to happiness in bed.

For Valentine's Day, the most romantic day of the year, perhaps nothing says "I love you" more than a romantic, candlelit dinner for two. As I reflect back upon past Valentine's Days, my most romantic memories, going as far back to the very first time I celebrated Valentine's Day with a prospective girlfriend, are those of sharing intimacy over a pot of fondue – a meal that two people can share communally.


During the winter of 1971 I was a high school senior living in a suburb of Chicago. Though I was socially awkward I had mustered up the courage to ask a very sweet girl in my English class out on a Valentine's Day dinner date. My destination was Geja's Cafe, a fondue restaurant in Chicago's Old Town neighborhood down the street from Second City, which served as a Bohemian enclave for artists and writers. I remember the weather being bitterly cold and the heater in my Karmann Ghia was non-functioning. (I was young and naive when I bought the car the previous summer for only $700.) It was so cold during our 40-minute drive into Chicago that I had to put lit votive candles on my dash to keep the windows from frosting up and my date had to take out her earrings because she was afraid of her ears getting frostbitten.

I vividly remember the moment we entered Geja's Cafe. It was small, dark, warm and cozy. Throughout the dining room candles flickered. The burners beneath the fondue pots gave off a warm glow. A flamenco guitarist was performing. I felt like I was in the Old World. Unlike other restaurants where you spend time waiting on your food to be prepared and served, Geja's was a truly interactive experience. We began dipping bread and fruit in cheese fondue and then moved on to cooking meats, seafood and vegetables in a pot of simmering oil. We finished the meal with pound cake cubes and strawberries dipped into chocolate fondue. This first date never developed into a relationship, but the memories of that romantic evening have stayed with me.

Restaurants and dining trends come and go, but Geja's Cafe has survived 55 years. According to Geja's website, it has been the site of 146,697 first dates and 16,797 engagements. In 2015, it was named America's Most Romantic Restaurant by a USA Today reader poll.


Born out of winter resourcefulness in 18th-century Alpine farmhouses, fondue was a way to utilize cheeses that had become hard and dry during winter storage, especially during a time when fresh ingredients were difficult to source. Fondue is essentially made from three components: cheese, liquid and starch. A basic formula for fondue for two is one pound of cheese, one cup of wine, and two tablespoons of flour. The best cheeses are ones that melt smoothly – such as Gruyere and Emmanthal.

According to the culinary chemist Hervé This: "Well-ripened cheeses are best suited to the preparation of fondues because, in the course of ageing, enzymes called peptidases have broken up the casein and the other proteins into small fragments that are more readily dispersed in the water solution." The best wine to use is an acidic white. As Hervé This writes in his book Molecular Gastronomy: "Wines that are excessively acidic, and if possible, very fruity... have high concentrations of tartaric, malic and citric acids. Malate, tartrate and especially citrate ions are very good at chelating calcium ions. The acidic and fruity wines experts prefer help separate the casein micelles and release their constituent proteins, which stabilize the emulsion by coating the fatty droplets." Translated into plain English, the more acidic the wine, the less likely your fondue will separate.

Fondue pots were quite popular in the 60s and 70s. Baby Boomers might still have one stashed away in the attic. Electric versions are available but I'm old-school and prefer the romance of a live flame. If you don't have a fondue pot, a medium cast-iron enameled casserole and wooden skewers will do.


Combine cheeses and flour and set aside.

Rub inside of fondue pot or medium cast-iron enameled casserole with the cut sides of the garlic clove, then discard the garlic.

Add wine to the pot and bring to a boil over medium-high heat.

Decrease heat to medium-low and add cheese mixture ½ cup at a time, stirring each time until melted.


Add the lemon juice and kirsch (if using) and stir to combine.


When you are almost finished eating the fondue, leave a thin coating on the bottom of the pot. Lower the flame and allow the coating to brown and turn into a crust which can be broken and shared.


If, after sharing the fondue, the flames of passion have been kindled, allow the pot to cool, pour in some white vinegar and deal with cleanup in the morning.


This year on Valentine's Day Dr. Chef Peter will be working a sold-out dinner service at his restaurant, fanning the flames of other people's romances. But when he finishes his shift and returns to his apartment there will be candlelight, a bottle of champagne, a platter of bread and fruit, his old orange Le Creuset fondue pot glowing, and his lovely wife awaiting.