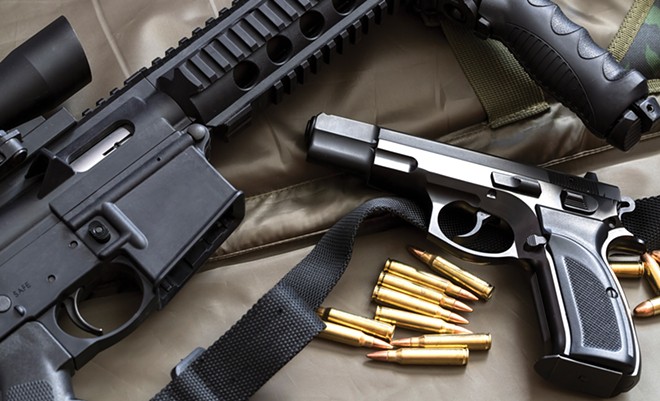 A mass shooting in Highland Park at a Fourth of July parade prompted questions about how the suspect was able to obtain a gun in a state with some of the strictest gun laws in the nation.

Law enforcement officials have said that the Highland Park shooting suspect, Robert Crimo III, 21, legally purchased and possessed the Smith & Wesson M&P 15 that he used in the attack that left at least seven dead and dozens injured.

Gun laws in Illinois regulate the purchase and possession of guns and ammunition. In order to legally possess a gun, the owner must have a Firearm Owners Identification Card.

Despite the existence of two previous reports regarding apparent suicidal and homicidal tendencies exhibited by Crimo, he obtained a FOID card and was legally allowed to purchase weapons and ammunition.

In April 2019, Highland Park police responded to a call that Crimo attempted to commit suicide with a machete one week prior. The report also stated that it was handled by "mental health professionals."

In September 2019, police returned to the home in response to a report that Crimo was using drugs, was depressed and had threatened to "kill everyone."

Crimo and his mother denied that account. Highland Park police initially confiscated 16 knives and one sword. No one was arrested, and Crimo's father claimed ownership of the knives, which police later returned to him.

At that time, Highland Park police completed a "Clear and Present Danger" form. The form states that clear and present danger reporting shall be used by Illinois State Police to identify individuals who, if granted access to a firearm or ammunition, pose an actual, imminent threat of substantial bodily harm to themselves or others.

The Illinois State Police Firearms Services Bureau, the administrator of the FOID card program, determines whether the subject of the clear and present danger report possesses a FOID card or has a pending application. At the time, Crimo had neither.

But three months after the September 2019 visit from Highland Park Police, Crimo did apply for a FOID card. Because at that time he was still under the age of 21, he needed a sponsor for approval. His father signed the application, state police have said.

After Crimo submitted his application, a background check would be initiated to determine whether there were any circumstances that prohibited him from gun ownership.

Illinois law allows state police to deny an application for a FOID card, or to revoke or seize a FOID card, if they find that the current or prospective cardholder is subject to any of the following disqualifications:

• Is under 21 years of age and has been convicted of a misdemeanor or found to be a delinquent;

• Has been convicted of a felony under the laws of Illinois or any other jurisdiction;

• Is addicted to narcotics;

• Has been a patient of a mental health facility within the past five years;

• Is mentally or developmentally disabled;

• Has been involuntarily committed to a mental health facility;

• Intentionally made a false statement on the FOID card application;

• Has been convicted within the past five years of battery, assault, aggravated assault, or violation of a protective order in which a firearm was used or possessed;

If Crimo would have had a FOID card or had a pending application at the time Highland Park police filed the clear and present danger form, analysts would have had to determine if there was a preponderance of evidence – a burden of proof that is met when it is determined that there is a greater than 50% chance the claim is true – to issue a clear and present danger determination.

Crimo had no previous criminal convictions on his adult record. His only conviction was for possession of tobacco by a minor when he was 16 years old. Under Illinois law, juvenile convictions are sealed.

And even though an unidentified resident of the family home claimed they were afraid to return to the home after the September 2019 call to the Highland Park Police, there was no order of protection.

Illinois also has a "red flag" law, officially the Firearm Restraining Order Act, which is usually pursued in circuit court in response to various actions, including brandishing of a firearm, threatened use of a firearm, and violation of an order of protection, among others.

While existing prohibitions on firearm possession are determined by an individual's prior criminal or mental health history, firearm restraining orders are different because they are an immediate but temporary action.

Crimo's FOID card application was one of more than 23,977 received by the Firearm Services Bureau in December 2019, and one of 309,176 received throughout the year. It was approved in January the following year.

In addition to the FOID background check, Crimo would have been subject to additional background checks through the federal National Instant Criminal Background Check System when buying firearms. Crimo passed checks on June 9, 2020, July 18, 2020, July 31, 2020 and Sept. 20, 2021.

Crimo has confessed to the shooting. He has been charged with seven counts of first-degree murder. He remains in jail with no bond pending trial.

DCFS director held in contempt for 7th time in 10 weeks