"You don't have to kill everything" 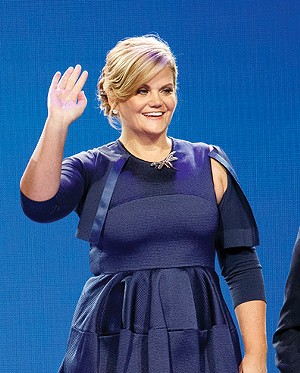 First lady M.K. Pritzker is in the loop on plans to bring a university presence to downtown Springfield, according to emails and elected officials who say they've spoken with the governor's wife about proposals.

Emails show that the first lady met with Springfield Mayor Jim Langfelder in early November to discuss downtown redevelopment, less than two weeks after emails indicate the governor met with the mayor.

Langfelder confirmed that he met with the governor and, later, the governor's wife. He said neither conversation involved in-depth discussions about redevelopment plans, including one to establish a downtown campus that came to light in late November, when an artist's rendering of a four-square-block plan began circulating and catching property owners by surprise.

"She expressed her love of Springfield," Langfelder said. "Whatever happens, we're looking forward to the development of the Y block." Jordan Abudayyeh, a gubernatorial spokeswoman, did not respond to a request to interview M.K. Pritzker.

Prior to M.K. Pritzker's meeting with Langfelder on Nov. 4, Zareen Khan, the first lady's chief of staff, emailed her a written synopsis of efforts to bring a university presence to downtown, including unrealized plans to develop an oversized block once occupied by the YWCA that's directly north of the governor's mansion.

State Sen. Andy Manar, D-Bunker Hill, who is pushing a plan to establish a campus that could consume as many as four blocks, confirmed that the governor's wife has shown interest.

"Over the past year, since the governor was sworn in, I've had multiple conversations with her," Manar said. "I'm not going to represent her opinion. What she has stressed to me, appropriately in my opinion, in every conversation that she and I have had with this, was the importance of involving local opinions, the importance of making sure it's a process not driven by state government, but driven by local opinions, local business owners and local elected officials. ... It cannot be a top-down decision."

After rumors started circulating, Illinois Times in late November confirmed the presence of an artist's rendering. By then, aldermen and Langfelder had been briefed. Media exposure wasn't the launch that backers were expecting. "There's a million different ways to do a community input process, and it didn't start in one of those ways," said Lisa Clemmons Stott, director of Downtown Springfield, Inc. "I don't think the rough start to the process is insurmountable to the end goal of the process."

Leveling buildings and displacing successful businesses and residential developments shouldn't have to be an option, Stott said. "You don't have to kill everything that is good about downtown for progress – you just don't," Stott said.

Stott said she initially was told decisions needed to be made by January, but that timeline appears to have loosed. "We definitely have been given more breathing room in our conversations," Stott said. "I definitely think it will be more of a spring decision for the governor."

Focus has been on University of Illinois Springfield and Southern Illinois University, but backers say neither school has produced plans that include programs, space needs, projected enrollment or price tags. Manar said other colleges also might get involved. UIS has long suggested a business incubator to replace one near the Old State Capitol. The four-block area pitched by backers, and depicted in an artist's rendering, is bordered by Second and Fourth streets on the west and east and Adams and Monroe streets on the north and south. In addition to residences, the area includes such businesses as the Sangamo Club, Hair Of The Dog and J.P. Kelly's. While pushing for a university presence, Manar said he's waiting to hear from schools.

"I can't put a path forward for advocacy until I know exactly what we're advocating for," Manar said. While Manar said he's hoping to find money in the state's $45 billion capital bill signed last year by the governor, he said he doesn't yet have a price tag.

"Putting the decision making on location aside, it's going to be a healthy request," Manar said. "This is a substantial lift. ... It's going to have to take everyone advocating, not just the city, not just the mayor. The county board chairman's leadership is essential on this."

"I'm hopeful we'll get there, but we're not there right now," Van Meter said. "I think the city is unanimously on board here. I think the real issue is the property owners in the potentially affected area. Many of them are extremely supportive, even if it may require a move on their part. But there are some who want more information, and those conversations have been continuing over the holidays."

"The governor's saying the opportunity's there if we can pull this together as a community," the chairman said.

In need of weed