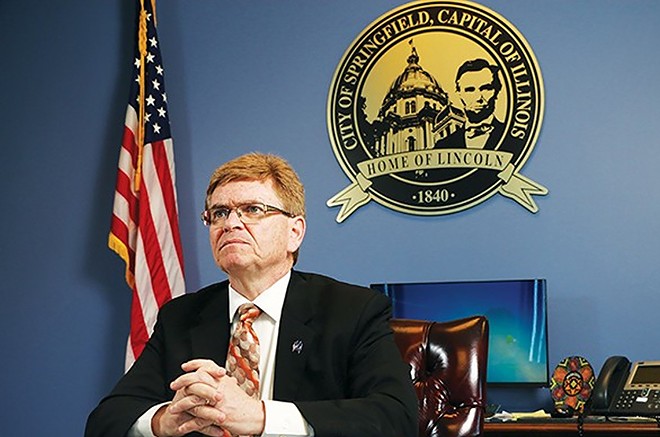 Mayor Jim Langfelder overruled his staff and didn't fire a water meter reader, prompting a federal civil rights lawsuit from a former meter reader who was terminated and now accuses the city of disparate treatment based on race.

In his lawsuit, Andrew Dunlevy, fired in 2018 after supervisors found that he'd falsified meter readings, says that he was treated differently than Tour Murray, a City Water, Light and Power meter reader who stayed on the payroll after supervisors determined that he'd been taking two-hour lunch breaks and otherwise not performing assigned duties for three or more hours each day. Murray also lied on his job application, grounds for termination, saying that he hadn't been convicted of a crime despite having pled guilty to residential burglary.

Dunlevy is white; Murray is African American. They were hired within days of each other, with fates determined by the mayor as one-year probationary statuses came to an end. Murray's probation was extended for six months, but he was not disciplined. He remains on the city payroll at a salary of $42,323, nearly $10,000 more than he made three years ago, when Langfelder overruled supervisors who said that Murray should be fired.

"The reason for the difference in treatment was because of the race of the two individuals involved," writes John Baker, Dunlevy's lawyer in a lawsuit scheduled for a June trial. The city says that there's no proof the mayor knew the races of Murray or Dunlevy when he overruled CWLP supervisors. The city also says that falsifying meter readings is different than being absent during the work day.

Dunlevy claims that the mayor's push to increase minority employment in city government resulted in discrimination. The city says that the mayor acted fairly.

"Plaintiff suggests that the mayor's concern about diversity in the workplace is evidence that he intentionally discriminated," writes Steve Rahn, assistant corporation counsel, in asking that the case be dismissed. "An honorable and laudable concern for rectifying systemic discrimination is not evidence of intentional discrimination."

The city's motion to dismiss the case is pending. A trial has been set for June 29 before U.S. District Court Judge Sue Myerscough.

In recommending that Dunlevy be fired, CWLP supervisors prepared a memo documenting instances in which he'd fabricated meter readings. Homeowners, including the owner of a vacant house, got unexpectedly high water bills as a result, testified Donald Ott, retired CWLP superintendent of distribution and general services.  "You don't have to bend down," he answered when a lawyer during a deposition asked what motive a meter reader would have to make up numbers.

Langfelder terminated Dunlevy, but overruled a CWLP recommendation, received about the same time, that Murray be fired.

The mayor testified that he hadn't read a memo prepared by CWLP supervisors who documented hours of missed work by Murray. Langfelder in his deposition testified that he believed the issue involved being 15 minutes late from lunch breaks and could be resolved with additional training.

CWLP supervisors who reviewed GPS tracking data determined that Murray, who was expected to start reading meters by 8 a.m., started as late as 9:40 a.m. and quit as early as 2:40 p.m. when the work day was supposed to end at 3:30 p.m. Supervisors determined that Murray had taken lunch breaks as long as two hours and was absent for about three hours each day over a two-week period while meter readers had between 80 and 90 minutes of down time each day as they traveled between routes. Murray, a probationary employee, was not disciplined; CWLP chief utility engineer Doug Brown testified that a union member would have been suspended.

"(T)he magnitude that it was explained to me, it was 15 minutes or what have you," Langfelder testified. "I remember the discussion being that 15 minutes extended lunch time, and that was the extent of it. Again, I had not seen the details of the write-up."

Murray also had lied on his job application, saying that he hadn't been convicted of a crime. Murray pleaded guilty to residential burglary in 2010 and served 53 days in the Sangamon County jail. CWLP brass was concerned about a convicted burglar entering homes to read basement meters, according to the memo recommending termination that was authored by Greg Yakle, a CWLP manager who retired in 2019.

Langfelder testified that he trusted the city's human resources department to vet job applicants and that he wasn't concerned about Murray's 2010 burglary conviction, even while acknowledging that lying on a job application is grounds for dismissal. "(O)nce someone is hired, you know, this is 2010, you know, time was served and you move on from there," Langfelder testified.

Ott testified that an employee told CWLP managers that Murray had shown someone a gun in a city parking lot. The matter was not pursued, Ott said, because the employee wouldn't make a formal complaint. Langfelder testified that he never was made aware of any concerns about firearms.

The mayor testified that the decision to keep Murray was mutual between himself and CWLP, but he did not name anyone at the utility who agreed with him. Baker, the plaintiff's attorney, writes in a court motion that Brown and retired electric division manager John Davis should be dismissed as defendants because documents turned over since the lawsuit was filed show that they recommended both Murray and Dunlevy be fired and so did not discriminate.

The city says that Murray's conduct was different than Dunlevy's conduct that resulted in termination, and so comparing the two cases isn't proper.

"Mayor Langfelder offered a reasonable and honest reason why he treated the two differently," Rahn writes in asking that the case be dismissed. "Plaintiff was accused of dishonesty in the performance of his job, i.e. entering false meter readings. Murray was accused of misusing his time."

Dunlevy, hired by the state Department of Corrections as a prison guard in 2019, now earns $57,700 per year, more than he made while working for the city. He is asking for $27,254 in lost wages, plus punitive damages, attorneys' fees and compensation for emotional distress.