Recounting the life of Jim Thorpe 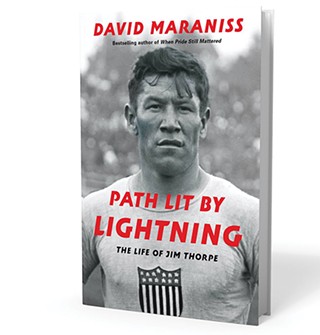 n Thanksgiving Day, 1928, Jim Thorpe played the final professional football game of his career. Chicago was the site and Thorpe donned the uniform of the Chicago Cardinals as they battled their crosstown rival, the Bears. Nearly a decade after its creation, the National Football League had settled into 10 franchises, six of them in major American cities. The Cardinals were a pathetic team; their offense failed to score one point the entire season. Somehow, they managed to win one game. Cardinal owner Chris O'Brien, seeking to build attendance, signed Thorpe, then 41, to play in the season finale. Thorpe wanted to play once again to make "one last charge down a football field." It was important to him because the only time he felt "the great spirit" in his heart was when he was carrying a football toward the goalposts.

This was the life of Jim Thorpe, who, despite his failures in the 1928 game, would eventually join the NFL Hall of Fame. It is a life and career chronicled in Path Lit by Lightning, a magisterial and regal biography of Thorpe's life and career, written by David Maraniss, the Washington Post editor and award-winning author whose biographical subjects have ranged from Bill Clinton to Roberto Clemente and Vince Lombardi. The title of this biography comes from the Native American name of its subject, who was born in Oklahoma in 1887. Thorpe was part of the Sac and Fox Nation, receiving the tribal name Wa-Tho-Huk, which translate into the title Maraniss chose for his book.

Maraniss is a master of the biographical craft. In addition to capturing the spirit and life of his subject, he dives deeply into the larger context of the life and times when Thorpe lived. Most people think of Jim Thorpe and recall his victories in the 1912 Olympics and the subsequent loss of his medals. But Thorpe also played college football in the era when the gridiron game became part of our national psyche. As Maraniss observes in recounting Thorpe's college days, many of the issues that remain part of the game today find their beginnings in the era of The Carlisle Indians, a college team that was everything except collegiate. In addition to the Olympics and college football, Thorpe had a lengthy baseball and professional football career. Local Springfield fans might appreciate that in late October 1913, as a rookie with the New York Giants baseball team, Thorpe appeared in our town for an exhibition game. He homered. While it was not the sport where he gained the greatest fame, baseball at the barnstorming level may have been Thorpe's greatest source of income. Along the way he played with Satchel Paige, Josh Gibson, Christy Mathewson and met Babe Ruth in New York City. Thorpe also had a career in Hollywood, appearing in countless movies, including Knute Rockne, All-American, where actor Pat O'Brien asks the Irish to "win one for the Gipper." In the film, it is the actor Thorpe who informs Rockne before the second half begins, "two-minutes, Rock."

As a biographer, Maraniss prides himself on the methodology he calls The Four Legs of the Table. The fourth leg is "Look for What's Not There." Don't accept the accepted story and the myths that have been passed down. The author's research details how Thorpe and Carlisle football were manipulated by the legendary Pop Warner. Ironically the Warner character would serve as the narrator in Jim Thorpe-All American¸ the biographical film of Thorpe's life. Warner's film portrayal was anything but accurate. Maraniss also exposes many of the myths regarding the loss of Thorpe's Olympic medals and the battle for decades to formally reinstate his victories. The struggle for redemption finally ended this year when the International Olympic Committee restored Thorpe as the official winner of the 1912 events. Path Lit By Lightning reveals corrupt, hypocritical Olympic leaders, led by Avery Brundage, who, ironically, was beaten badly by Thorpe in the 1912 Decathlon, failing to even complete the event.

The greatest irony of Jim Thorpe's life is that his success as an athlete came at the cost of destroying his personal culture. He was an American Indian who in his youth was shipped off to a school in Pennsylvania run by the federal government, the Carlisle Indian Industrial School. The official policy of that institution was to remove from Natives their language, dress, behavior, tradition and soul. At Carlisle they lost their Native names and wore uniforms resembling those worn by the soldiers who fought and killed their ancestors. Initially, Thorpe attended the Haskell School, a college still in existence in Lawrence, Kansas. When that school opened in 1884, its superintendent observed that for its students, "Here we hope they share with us the blessings of enlightened people."

Following Thorpe's athletic accomplishments in Path Lit By Lightning is remarkable reading. In 1912, he traveled to the summer Olympics in Sweden where, through his victories in the Pentathlon and Decathlon, he would earn recognition as the greatest athlete in the world. Returning to America in June he immediately joined the Carlisle college football team and led them to a 12-win season, outscoring opponents 454 to 120. Their great victory that season was against Army, where Thorpe played against two members of the West Point squad, Dwight Eisenhower and Omar Bradley. At the 1912 Olympics, another Army officer, George S. Patton, was on the American team.

Jim Thorpe was born in the United States, never leaving his country of birth other than to travel to Sweden in 1912 as a member of the U.S. Olympic Team. Yet it was not until 1916 that he was granted citizenship. By 1916, as a professional athlete he was earning more than $3,000 a year, an amount sufficient to require him to pay income tax. But still it was not until age 29 that Thorpe was granted citizenship. For the rest of Thorpe's life, he often found himself acquiescing in the disparaging and demeaning characterization of American Indians. He did so because he needed the money.

In the years following Jim Thorpe's athletic career there may have been others to contest his standing as the greatest athlete ever. That argument will never be settled. But Thorpe's story of a life struggle against all odds is one that can never be diminished. Path Lit By Lightning by David Maraniss is a powerful and extraordinary story.

Stuart Shiffman is an associate circuit judge in Springfield. He is a member of the American Bar Association Gavel Awards Committee, Scribes — The American Society of Writers on Legal Subjects, and a frequent contributor to Judicature Magazine and Bookreporter.com.