You read his poems in school and you have heard his name all of your life. If you are curious like I was about this man who composed folk songs and wrote poems, books about Lincoln and children’s stories for his three daughters, along with a book about social justice called Chicago Race Riots, come to Galesburg and get a glimpse of his early years.

The Carl Sandburg birthplace is a three-room cottage located at 331 East Third Street. The home where Sandburg was born on Jan. 5, 1878, is quite modest. Next door to the house is the visitor’s center where you can watch the film on Sandburg’s life and meander along the wall and read the display stories that bring him and his works to life.

Carl Sandburg’s life didn’t begin with a silver spoon. He was born to hardworking Swedish parents, August and Clara Anderson Sandburg. His father, a blacksmith’s helper, purchased the cottage in 1873. It was six years later when Carl, the second of seven children, was born. The family moved the following year. Taking the driving tour will allow you to view the different places around town that the Sandburg family lived.

Life was hard and Carl Sandburg began working at an early age. He quit school after the eighth grade and worked at various odd jobs until 1897. According to his biography, “He delivered milk, harvested ice, laid bricks, threshed wheat in Kansas, and shined shoes in Galesburg’s Union Hotel before traveling as a hobo in 1897.”
click to enlarge 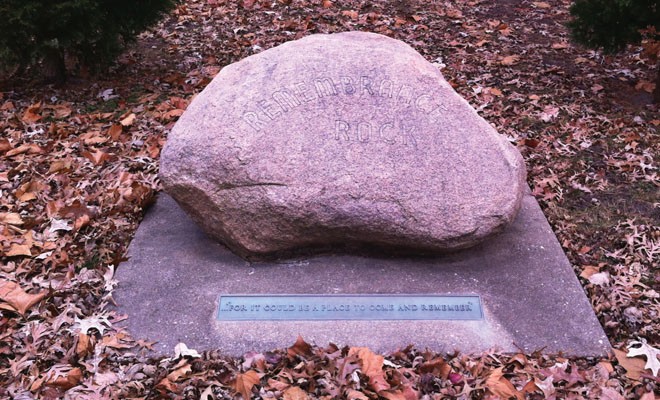 At the age of 20, Sandburg volunteered for the Spanish American War. He served in Puerto Rico, then returned home to Galesburg and attended Lombard College. At the college he made connections that influenced his future writing career. After college, Sandburg sold stereoscope views and wrote poetry for two years before his first book of verse, In Reckless Ecstasy, was printed in 1904, followed by Incidentals (1907) and The Plaint of a Rose (1908). 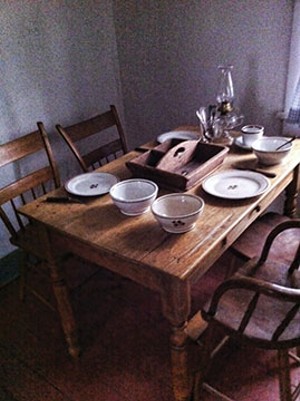 Inside the Sandburg birthplace.
Inside the Sandburg birthplace.
In 1907, while working as an organizer for the Wisconsin Social Democratic Party, Carl Sandburg met Lilian Steichen, whom he married in 1908. He worked for a while as a journalist for Chicago Daily News. Continuing to write poetry, it was the literary publication Poetry magazine that brought Sandburg fame. It was his two-volume Lincoln books, published later on, that brought him fortune.

For years Sandburg lived on the Michigan Dunes, later moving to Flat Rock, N.C., where he lived out the rest of his life. He died July 22, 1967. His ashes were returned to his Galesburg birthplace and placed beneath Remembrance Rock, a red granite boulder. Ten years later the ashes of his wife were placed there.

Remembrance Rock was dedicated in 1966, a year before his death. At the dedication dirt from places associated with Sandburg’s early life and career was deposited. Dirt from his parents’ homes in Sweden, Plymouth, Valley Forge and others were placed by children at the site.

The quotes leading down to Remembrance Rock are taken from Sandburg’s writings. One says, “It is something to face the sun and know you are free. To hold your head in the shafts of daylight slanting the earth, And know your heart has kept a promise and the blood runs clean: It is something.” That segment is from the poem “Clean Hands,” in Smoke and Steel, 1920.

Here in the heart of Illinois, come and learn about Carl Sandburg and his legacy. Besides the birthplace, visitors center and Remembrance Rock, there is also a driving tour to sites associated with the poet’s life. Log onto http://www.sandburg.org/ to plan your own visit.

Cindy Ladage has co-written three children’s books with Jane Aumann and three fiction books on her own as well as a series of short stories. Cindy was a contributor to the recently released Canning, Pickling and Freezing with Irma Harding. She lives with her husband, who is a farmer in central Illinois. They have three grown children and two grandchildren.