Empathy may be waning, but caring about others is worth it

During the early days of the pandemic, we all seemed to come together. Distantly, anyway. We stayed home to save lives. We taped up hearts and praised essential workers. Now – all these months later – many say they have never seen the country more divided.

In Sangamon County alone, more than 270 people have died after contracting COVID-19. Many of us have grieved those who have died, the people behind those numbers.

When the FDA authorized vaccines for emergency use, many of us celebrated. The Pfizer vaccine was fully approved by the FDA in August, further signifying its safety and efficacy. Many intensive care units have been overwhelmed due to COVID-19 hospitalizations. Public health officials and doctors continue to urge the unvaccinated to get the shots in order to protect themselves and others.

When vaccines became available to the elderly and immunocompromised, Candace Ayers of Springfield was eager to set up her appointment. She had long suffered from a severe case of rheumatoid arthritis, an autoimmune disease.

"We took this so seriously," said her son, Marc Ayers, about the pandemic and his family's response. "We were really excited about going to this doctor appointment to get them their first Moderna dose," Marc said about his parents. He drove them to their first vaccination. They sat in the back of his car with masks on. The mood was giddy. Things seemed as though they might restore back to some version of normal for the Ayers and for all of us, as vaccines became widely available. Candace went with her husband to Mississippi to visit a friend in mid-July. It was before concerns about the delta variant were high. The family believes it was there, where the majority of residents are still unvaccinated to this day, that the Ayers couple contracted COVID-19.

After a battle in the hospital, Candace died on Sept. 3 at the age of 66. Hers was a rare case of a vaccinated person becoming infected and dying. Her obituary – in which it was said that the choices of others to not get vaccinated led to her death – went viral. With it, the family wanted others to see why they should take the virus seriously and get vaccinated. Marc said he especially wants immunocompromised people to take note.

The family's story has reached far corners of the globe. Marc said he has been flooded with messages. Most are negative, some are unspeakably vile. Some, wrongly, claim the vaccine is at fault for her death.

Richard Gilman-Opalsky, a professor of political science at University of Illinois Springfield, said it's no surprise that some have responded to the pandemic with a sense of brutal individualism. Some see mask mandates and the push for vaccines in direct conflict with their version of freedom and patriotism. "Cruelty is a feature of that," Gilman-Opalsky said of our society that can value individual competition more than collectivism and cooperation. "When being a rugged individual who wants to win and stand apart from everyone else is virtuous, good, noble and heroic – the cruelty is a feature."

Cruelty is also made much easier by the internet. Don't read the comments section. That's a virtue many of us have heard, but it's not always easy. News articles announcing new deaths are regularly reacted to with "laughing" emojis, trivializing the suffering those stories carry.

The amount of collective trauma and grief over the past year and a half has led to what some are calling an "empathy deficit." People are under a lot of stress and some lack the ability to deal with those they don't already agree with. Some are dealing with pre-pandemic trauma bubbling back up. Some may lash out at others in an attempt to feel better, said Diana Knaebe, president of Memorial Behavioral Health. Of course, that never works for long. Fueling the vitriol is often fear, said Knaebe. "People are afraid. They don't know whether they're making the right decisions. They don't know whether they're doing the right thing."

Though it may be lacking these days, empathy is powerful. "It's about listening to someone else and holding space for them," said Knaebe. It's also about letting another person know they aren't alone and that it's OK to be vulnerable.

Marc said, despite the torrent of hateful messages, sharing his mother's story has been worth it. There have been those who told the family that they got vaccinated after hearing about Candace. "My mom's legacy is going to continue, and people are going to have extra years on this earth because of my mom and because of our story," said Marc. "It brings joy to my family to know that." 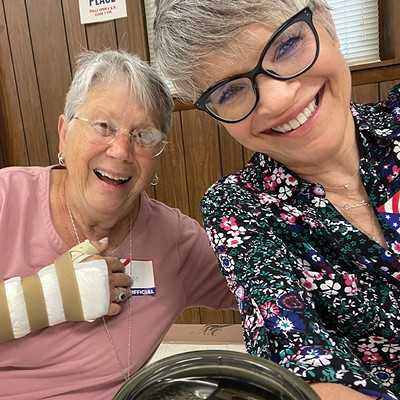