Fiction by a fact man

A new novel by Taylor Pensoneau, author of books about Illinois politicians and Illinois gangsters 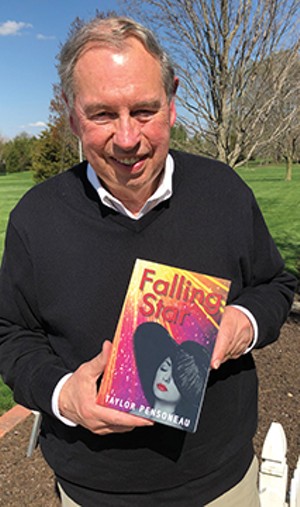 Reporter and historian Taylor Pensoneau on writing fiction: “If you don’t like a character, you can kill her off.”
Taylor Pensoneau’s name is familiar in these environs. He’s known for his long affiliation with the St. Louis Post-Dispatch writing about Illinois politics, his influential role with the Illinois Coal Association and his books about former governors and southern Illinois gangsters. He’s the author and contributing author of seven nonfiction books. His most recent book, Falling Star, is his second venture into the world of fiction. The first was The Summer of ’50. Pensoneau says there is freedom and power in writing fiction. “You can create characters and let your imagination run wild,” says Pensoneau. “If you don’t like a character, you can kill him or her off. There’s a tremendous amount of power that you don’t have when writing a biography about someone, especially a person who is still alive.”

Falling Star is an enjoyable read. Pensoneau draws on his life experiences, weaves an interesting story and interjects names, places and circumstances that are familiar to those of us from central Illinois. Jake Brosky is an investigative reporter for the St. Louis World. Brosky is one of the best in the business and cunningly masterful at getting people to reveal things when they don’t know how they will be used. Brosky’s investigative reporting, coupled with his reliable instincts, have helped land many of his stories on the front page of the World. Never mind that he can’t write very well…a rewrite man at the paper takes the results of his sleuthing and transforms them into must-read stories.

It is the early 1950s. Enter a Hollywood starlet, one now fading from the limelight. Brosky follows a tip for an opportunity to meet the famous woman – Clarissa Monnet. But, by the time he arrives, she’s gone. A few pieces of paper left behind provide clues for Brosky to pursue. Someone ends up dead, strangled and dumped in the Mississippi River. Is there a connection? Brosky doesn’t believe in coincidences. He is determined to find Clarissa Monnet and learn more about her. Why was she in a women’s shelter in St. Louis, and why did she leave suddenly under mysterious circumstances? What secrets does she hold? Brosky travels to Los Angeles, following one lead after another that ultimately takes him to her hometown in Illinois.

An Illinois governor with aspirations for the presidency, leading businessmen who ensure political coffers are flush with cash for elections, powerful members of the mob from Chicago and Los Angeles, high society women manipulating others around them, high school friends and foes and a likeable lieutenant governor in line to be governor are just some of the characters providing intrigue.

People long haunted by deeply hidden secrets from their past are on edge as news of the exploits gets closer to the front page. A stately mansion on Wiggins Avenue in Springfield, the popular Ariston Café in Litchfield, the governor’s office on the second floor of the Illinois Capitol and the Eads Bridge are just some of the familiar places peppered through the story.

Characters in this web become more and more entwined. In the final pages of the novel, Brosky is following yet another lead. He hopes this will result in another revealing front page story related to the famous Hollywood star who hails from Illinois and whose real name is not Clarissa Monnet. I suspect we haven’t heard the last from Jake Brosky.

Taylor Pensoneau wrote about Illinois politics and politicians for the St. Louis Post-Dispatch for many years, covering five Illinois governors. Fresh out of college with a degree in journalism from the University of Missouri, he was hired by the St. Louis Post-Dispatch in June 1962 and spent three years in general reporting. He moved to Springfield in 1965 when the Post-Dispatch reactivated its bureau in the Statehouse press room. Pensoneau calls that time the “golden era” in the Statehouse press room when reporters were engaged in hard-hitting news and investigations. He says elected officials in Illinois were subject to tough investigative reporting years before the Watergate scandal in Washington, D.C.

The story line for Falling Star has been in the back of his mind for many years. He started writing it while on vacation in Key West, Florida, in the spring of 2004 but got interrupted by other books. An experience he had as a teenager inspired him to incorporate a water tower into the story. Clearly Jake Brosky with the St. Louis World is inspired by his own experiences as a reporter for the St. Louis Post-Dispatch. The falling star Clarissa Monnet was also inspired by a true story. In early 1964 Pensoneau got a call from a man who ran a shelter for abused women in St. Louis. He told Pensoneau a Hollywood actress was in a back room, and if Pensoneau came over he could try to get a story from her. By the time Pensoneau arrived, she was gone. Pensoneau was familiar with the actress, who became famous during the silent film era. That missed opportunity always stuck with him, and 55 years later the Hollywood actress was the inspiration for the central figure in his second novel. For years the working title for his book was The Elusive Dame, but eventually he settled on Falling Star.

Karen Ackerman Witter started freelance writing after retiring from a 35-year career in Illinois state government. She interacted with Taylor Pensonseau about acid rain policy and energy issues in the late 1980s when she was director of the Illinois Department of Energy and Natural Resources and Pensoneau worked for the Illinois Coal Association. At the time neither could have imagined that nearly 30 years later Witter would be writing a book review for Illinois Times about Pensoneau’s latest novel.