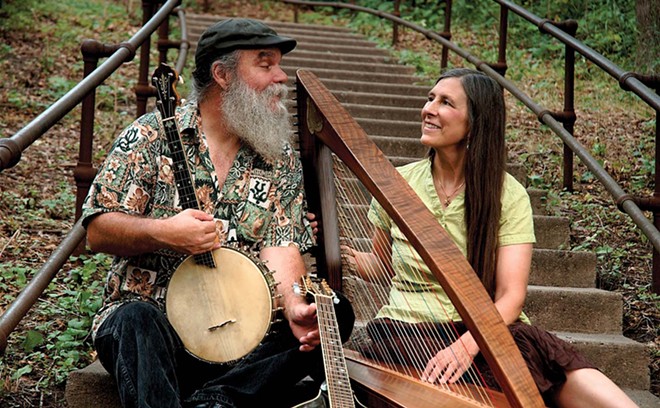 As we approach our third weekend in September, the weather feels like fall and the music feels like it's falling into place as well. As all scientific and medical advice advise against gathering inside in close quarters, our usual wind-down of outdoor gigs as the weather cools takes on new meaning in 2020. What's going to happen when playing live music outside is no longer feasible? That's certainly the question to ponder upon, but I make a move to adjourn to enjoy what's left of the out-of-doors performances upcoming in the next few weeks.

I had a notion that our live-streaming shows would pick up in the coming months, and right on cue, some intrepid local musicians have begun a weekly Facebook Live, music-based program. Max and his sister, Gwen, part of the Harris musician family in Springfield (Little Big Shots, Bustin' Loose, Girl-a-Thon and parts of many other popular area groups) debuted their Max & Gwen Show this past Tuesday with Ashley Staley and Jack Stege of JackAsh as featured guests. Max posted that it's "gonna be fun and different from any other Facebook show" by including interviews and songs with local musicians and a chance to ask questions through the comment section. Plans are set to continue every Tuesday at 6:30 p.m. on Facebook Live from Gwen's personal page for the time being. After checking to see who's on for next week, Gwen asked me, so I will be the guest on Sept. 22 and NCR is on for Sept. 29.

The Hickory Ridge Concert Series at the Dickson Mounds Museum near Lewistown, hosted and booked for some 25 years by Chris Vallillo, renowned folksinger, musician, producer, singer-songwriter and Western Illinois native son, goes all in online for the first time this Saturday. Curtis & Loretta, fabulous folk singers, songwriters, musicians and nationally known performers, kick off the virtual show from their home in Minnesota with Chris opening at 7 p.m. During intermission there will be a Q&A session where online listeners are still expected to eat pie, as was the custom for decades at the in-person Hickory Ridge concerts. So for now, just partake in whatever dessert is available wherever you may be watching, understanding that's how the cookie crumbles during a pandemic. Check it all out on the Hickory Ridge Concerts Facebook page or the Chris Vallillo YouTube channel every third Saturday monthly, as acclaimed folk duo Ordinary Elephant is on for October and traditional fiddler and musicologist Dennis Stroughmatt for December.

Now as we head back to some outside, in-person, live gigs, let's take a look at what's happening this weekend around town in our live music listings. Why don't we go backwards for a change and start with Monday night when Brother Jefferson brings their soul-inspired blues sounds to the Alamo during the Illinois Central Blues Club Blue Monday experience. Sunday afternoons outside happen as Josie Lowder teams up with Lowder & Manning to knock out the folks at 3Sixteen, me and Theresa O'Hare entertain at It's All About Wine, Jones & Chase play it cool and sweet at Sheedy Shore WineGarden, TULO+EADS rocks, pops and country-s out at Long Bridge, while the Wowie Zowie Duo does it good at Blue Grouch. Saturday is chock full of stuff including the Jerry Garcia Celebration at Danenberger's, Stone Giants playing hard and huge at Crows Mill Pub, Unchained turned loose at the Curve Inn, Ryman's Way country-fying the Main Gate and many more fine musical acts everywhere you may choose to go.

Take care and be careful while enjoying the tunes responsibly.