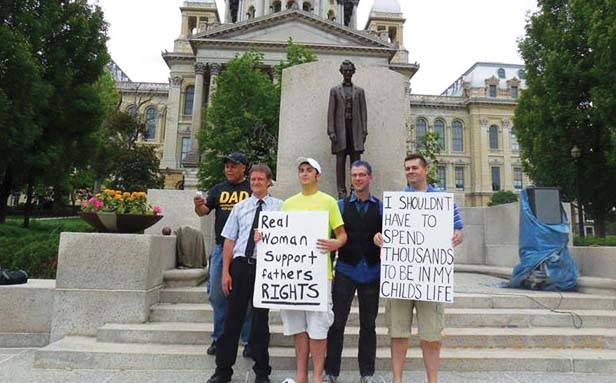 While many dads celebrate Fathers Day, many others are struggling to develop and maintain a relationship with their children.

Illinois Fathers is a network of non-custodial parents and grandparents encouraging co-parenting in separated and divorced families. The group held a gathering outside the Capitol June 10 to observe “Fatherless Day.” This day is recognized by fathers’ rights organizations throughout the country in an effort to raise awareness for the struggles fathers go through when trying to have a relationship with their children.

The group wants Illinois lawmakers to acknowledge difficulties fathers face when parents are not together. Between child support, traveling to see their children and custody battles, a father’s presence can be in the hands of the court system.

Joel Craig, 45, of Springfield, has been divorced for seven years. He has sons 18 and 12 and a 10-year-old daughter. He currently has custody of his oldest son, but after years of friction between him and his ex-wife, he struggles to maintain a consistent relationship with his children.

“I have never felt like I’ve gotten a fair chance from the family court system. It’s always been a case where I’m trying to prove that I’m fit enough to see my kids more,” he said.

Steven Westerfield, 31, area coordinator for Illinois Fathers of Springfield said birthing a child should not guarantee the mother rights to the child.

He said Sangamon County courts do not make the presumption that a child belongs to a mother. He said no law requires judges to consider what’s in the best interest of one parent or the other. Instead laws focus on children.

“I’ve heard testimony from many experts in this area who repeatedly tell me that frequent contact between both parents and a child is the most important thing to be considered in determining a custodial schedule and that’s what we try to do here,” Nardulli said.

Todd Bottom, 40, a doctoral student at DePaul University in Chicago, sought out a fathers support group after being divorced for seven years. He has three daughters ages 15, 11 and 9.

As a psychology student, Bottom studies the outcomes of non-custodial and divorced fathers. He said role definition, contact with children, control over their children, parenting skills and affirmation all play a part in a father’s identity.

He noticed that studies on divorced or separated families focus more on children. He said although studies on children are crucial, fathers should also be assessed.

“Overall we need to make sure that we’re giving enough attention to fathers’ outcomes, because if they’re less depressed and experience less anxiety then they’re able to parent better. In turn their children will be better,” he said.

Westerfield said there are hurdles preventing fathers from being involved.

He said there is a stigma that fathers are trying to get out of paying child support, but it’s not true. He said there are huge financial rewards to keep fathers out of the family for both mothers and the government.

According to Westerfield, programs such as food stamps, Section 8 and medical cards, provide non-taxable income to mothers as long as the father is not around. In addition, he said, state court systems generate money from collecting child support and they get additional funding from the federal government as they collect more money.

Nardulli said he could not comment on the way the government regulates Section 8 and other programs, but said he tries to give parents equal rights and responsibilities. He said the best way to combat any negative portrayals of one parent from another is to give the non-custodial parent more time with the child.

He said the biggest difficulty he faces is dealing with the distance between families and making parents realize they have to take care of children in all conditions.