Father Stu has good intentions, nothing Fantastic about these beasts, Moon Knight is a fresh take

If good intentions were the basis for entering cinematic heaven, then Rosalind Ross' Father Stu would earn a place at the top of its firmament. Unfortunately, I won't be judging it in such lofty terms, and as such, it falls a bit short of movie perfection. A passion project of its star and producer Mark Wahlberg, who also takes on the titular role, it tells the tale of one lost soul, Stuart Long, who struggles to find his place in the world. Odd jobs, brushes with the law and a hairbrained scheme to become a movie star lead him to Hollywood where he reunites with his estranged father (Mel Gibson) and falls in love with Carmen (Teresa Ruiz), going to her church to get her attention.

Miraculously, he's taken by the Catholic doctrine and decides to become a priest, only to be struck with muscular dystrophy. If this weren't a true story, you'd scoff at the fantastic turns it takes. Long's tale proves a bit unwieldy, coming off initially scattered. However, it finds its feet and ultimately delivers a poignant, moving message, due in large part to Wahlberg's committed performance. In theaters. 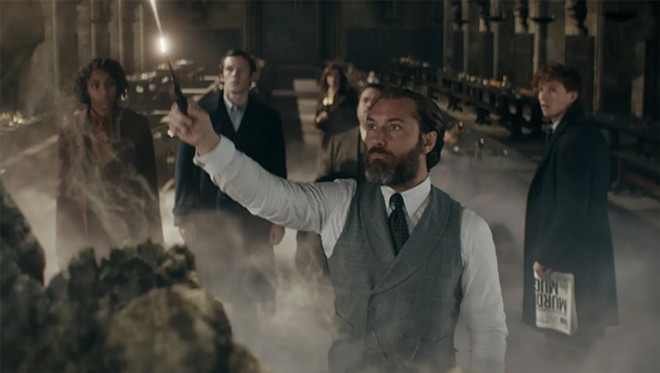 Fantastic Beasts not so much

I'd be hard-pressed to find a person who gets excited about the lackluster Harry Potter follow-up Fantastic Beasts. The third entry, The Secrets of Dumbledore, continues to try to generate a bit of excitement in this moribund franchise, only to shoot itself in the foot with an overcomplicated plot that doesn't allow entry for those who haven't devoted their lives to study all things Potter related.

The crux of the story deals with the combat between Dumbledore (Jude Law) and his former lover, Grindelwald (Mads Mikkelsen), the former intent on defending the world from the latter's plan to control the wizarding world and using it to dominate the world of muggles. The subtext of democratic beliefs forever in conflict with the forces of fascism is obvious but no less powerful or regrettably timely. However, the convoluted subplots involving bringing a group of wizards together, led by Newt Scamander (Eddie Redmayne), takes far too long while a plan to purposely confuse Grindelwald to throw him off proves...well, confusing. This entry asks for a degree of patience in the viewer that it and the previous two films haven't earned. In theaters.

Realizing that perhaps their tried-and-true formula is wearing a bit thin, Marvel Films shakes things up with their latest television entry, Moon Knight. Eschewing the standard origin story, the viewer is dropped right in the middle of a conundrum. Steven Grant (Oscar Isaac) knows there's something wrong with him – he wakes up in places he's never been, often realizing he's left a path of destruction in his wake. Turns out, he shares his body with assassin Marc Spector, and they've been granted mystical powers by an Egyptian deity which allows them to turn into the titular hero.

What their purpose is remains a bit of a mystery after the first three episodes. However, Isaac's dual performance – the arguments the timid Grant has with his bitter alter-ego Spector are a hoot – keeps us hooked, as does Ethan Hawke's turn as an icy villain who will stop at nothing to recover an artifact our hero has in his possession, though he knows not what it is or how he got it. It sounds a bit confusing, but the unexpected humor and exciting action scenes reward the patient. Streaming on Disney+