Farm history at Ryan’s Round Barn 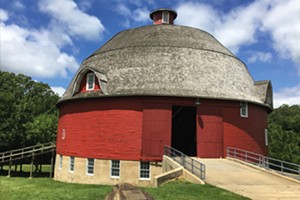 PHOTO BY CINDY LADAGE
This round barn, near Kewanee, was built in 1910 by a Chicago doctor for his Black Angus cattle.
One of the loveliest places I’ve been in some time is Ryan’s Round Barn. Located six miles from Kewanee on Route 78, the barn is about two hours north of Springfield, near the entrance to Johnson’s Sauk Trail State Recreation Area. It’s a surprise in the midst of an Illinois state park. The park offers a variety of trails and a campground. The park is on a glacial moraine and the barn is a backdrop for the rolling hills of Henry County. The park sits beside a trail that led Native Americans from Lake Michigan to the confluence of the Mississippi and Rock rivers.

The barn was added to the National Register of Historic Places on Dec. 31, 1974; it was the first round barn in the state to be added to the register. According to the Henry County Tourism Bureau, the barn measures 80 feet high and 85 feet in diameter, and is one of 42 round barns remaining in Illinois.

The beautiful building is made of 16-foot-long white pine that was soaked in large vats so that it would be pliable. The barn is a 360-degree perfect circle without any interior beams to support it. The interior has three and a half levels and a central silo. The silo is 16 feet wide and has a moisture-resistant plastered interior directly in the building’s center. This is just one of the things that made this barn ahead of its time. Other features include centrally located waste drains and a dual track and trolley system used for delivering feed and for removing waste.

It is hard to say what is more riveting, the outside of the barn, or the amazing ceiling inside. The roof of Ryan’s barn features four gambrel dormers spaced evenly around the edge and a cupola at the top. It was completed in 1910. Steve Christian, director of the Friends of Johnson Park Foundation said, “This barn is a perfect circle on the outside as well as the inside.This is the largest round barn of this style, and they used all horizontal siding.”

The barn was built by Dr. Laurence Ryan who grew up on a farm in the area. He purchased the farmland that the barn is situated on in 1908 as a retreat. The land was comprised of 320 acres and three farmhouses. Dr. Ryan was a medical doctor, a surgeon and chief of the medical staff at St. Anthony Hospital in Chicago.

After learning about round barns from the Pennsylvania Dutch, he decided he wanted one of his own to house his prized Black Angus cows that he imported from Scotland. According to the Illinois Department of Natural Resources homepage for Johnson’s Sauk Trail: “Round barns originally were built by religious groups because they “left no corners in which the devil could hide.” 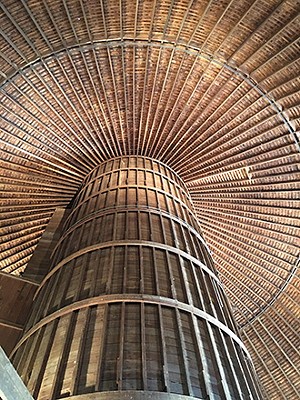 PHOTO BY CINDY LADAGE
The barn’s interior silo could hold 400 tons of corn.
Christian said that the Pennsylvania Dutch barns, while round on the outside, were not completely round on the inside. It took a special carpenter to know how to build this amazing historical site. Dr. Ryan drew up plans for the barn to house his 50 head of purebred Black Angus. After asking three carpenters to build a perfectly round barn and being turned down because they said it couldn’t be done, Dr. Ryan eventually found a German immigrant, a Mr. Feurst, who took on the task.

With a hay mow that takes up two-thirds of the upper level of the barn, when full of hay and straw, it held 250 tons. The upper floor of the barn was used for storage just like they are using it today to house antique farm equipment. Steve Christian said this level never had cattle on it – the Black Angus were always kept in the bottom level of the barn.

Today, the main level serves as an agricultural museum. The barn is owned by the State of Illinois and the contents belong to the Friends of Johnson Park Foundation. The barn came to the state after a few transactions. Dr. Ryan died in 1932 of pneumonia and his wife held onto the farm until 1939. At that time the farm was sold to E.A. Johnson from Annawan. “The last tenant farmer under the Ryan family was Marvin Morey. His daughter is still alive and she remembers playing here,” Christian added. “Ed Johnson sold the barn to the state of Illinois in 1968.”

The Friends of Johnson Park Foundation was organized in 1984. They maintain and preserve the barn and assist Johnson Park as well as conducting tours for historical and educational purposes. This is an amazingly beautiful site well worth taking the time to stop. Tours are available May through October, the first and third Saturday of each month. 1 p.m. to 4 p.m.

With the State of Illinois low on funds, if anyone wants to send donations for upkeep of the barn to be used by the Friends of Johnson Park Foundation, or if you wish to schedule a tour, contact Steve Christian at 309-721-0305. For more information about the state park, log onto http://dnr.state.il.us/Lands/landmgt/parks/R1/JOHNSON.HTM

Cindy Ladage, a freelance writer and IT contributor, lives on a farm near Virden.