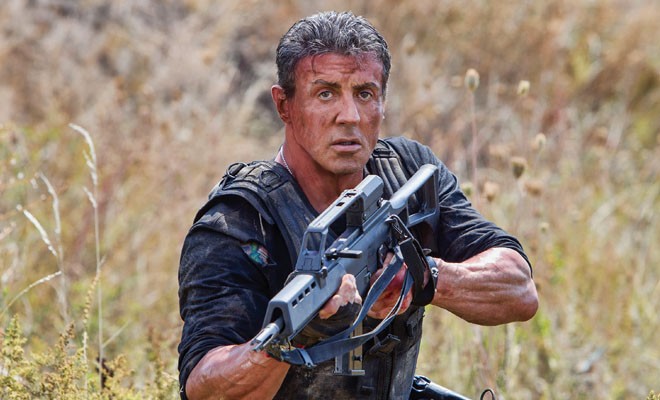 Having now sat through three Expendables movies, I can safely say that this is the most predictable franchise in film history. Nothing, and I mean nothing, comes as a surprise in Sylvester Stallone’s series for geriatric action heroes. Each movie’s plot marches lockstep through a pattern that’s as expected as it is tiresome. Old mercenaries get together, they blow stuff up real good, crack wise along the way and kill the bad guy in a gruesome manner. The credits roll, the guys in the audience walk out satisfied. Their wives or girlfriends who’ve been dragged along wonder what the hell they ever saw in them, and Stallone and company live to film another day. And while this sort of surety is part of the appeal of this franchise, that’s also its biggest problem. For a group called The Expendables, none of them are ever expended, as it were. Oh, one of them may get injured along the way and in their martyrdom serve as their colleague’s motivation but rest assured, they will recover and all will be raising a glass at the local watering hole to celebrate their victory in the end.

In the interest of staying true to form, I should probably give a summary of the plot at this point in the review and will refrain from using the phrase “spoilers ahead.” That would be superfluous. After springing their long-lost teammate Doc (Wesley Snipes) from an armored transport train in Western Europe, a job to stop an arms dealer goes horribly awry. Not only do Barney Ross (Sylvester Stallone) and his crew get humiliated but they find out that their target is a former ally of theirs, Stonebanks (Mel Gibson), who was thought dead but is now making big bucks by selling weapons to Third World dictators and other high-paying miscreants. Adding insult to injury, veteran gunman Caesar (Terry Crews) ends up seriously injured.

Licking his wounds and telling his veteran teammates, including Christmas (Jason Statham), Gunner (Dolph Lundgren) and Toll Road (Randy Couture), that he no longer wants to work with them because he feels they’re getting too old to cut the mustard and he doesn’t want their deaths on his conscience, Ross recruits a younger crew so that he can go back into the fray and bring Stonebanks down. Working through Bonaparte (Kelsey Grammer, in a nice turn), a recruiter of soldiers of fortune, he enlists Thorn (Glen Powell), an acrobatic computer hacker; Mars (Victor Ortiz), an expert marksman with attitude to spare; Luna (Ronda Rousey), a beauty with plenty of brawn and Smilee (Kellan Lutz), who speaks more with his fists than anything else.

From a movie geek perspective and as a filmgoer of a certain age, one thing that’s appealing about these films is seeing certain cinematic tough guys appear on screen together giving us testosterone-fueled confrontations we never thought we’d see. Yeah, these guys have all gotten a bit long-in-the-tooth and some require imaginative camera angles to hide their ever-expanding, late middle-aged waistlines but it’s undeniably cool to see Stallone, Arnold Schwarzenegger, back as Trench, and Harrison Ford, on board this time as a CIA operative replacing the too-expensive Bruce Willis, go toe-to-toe with one another, each seeing who has the best glower or which one can snap off a tough-guy line of dialogue better than the rest. Of course, were Clint Eastwood ever talked into partaking in one of these celebrations of macho mayhem, everyone else would wilt in the face of his squint and raspy line delivery … but I digress. (For the record, Stallone did approach him about being in this sequel but was turned down.)

Truth be told, The Expendables 3 is the best entry in the series because of the screen veterans involved and while it is the longest of the films, it doesn’t seem like it. Gibson has that old, mischievous gleam in his eye, channeling it to make a memorable bad guy. He has a wonderful moment where he points out there’s little difference between himself and Ross. Ford proves he still has the swagger and presence to blow lesser talents off the screen. And Antonio Banderas provides welcome comic relief as a spastic new addition. Still, when Trench at one point says, “I’m getting out of this business and so should you,” I couldn’t help but think that Stallone and is co-stars might want to take this piece-of-sound advice to heart.