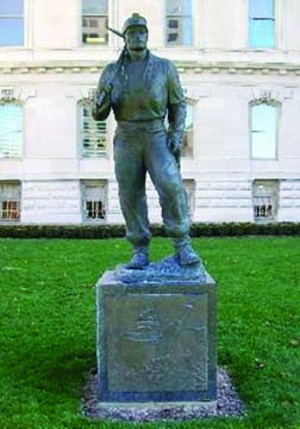 John Szaton’s “Coal Miner” is a memorial to miners who died in mines.

The vandalism being perpetrated in Washington, D.C., it turns out, is not confined to the nation’s finances. Perhaps you read of the House subcommittee that met in March to hear arguments against the design of a proposed Dwight D. Eisenhower Memorial near the National Mall. The design is the work of architect Frank Gehry, who decorated the proscenium of Chicago’s Millennium Park band shell. (Not seen it yet? Imagine strips of duct tape cooked not quite al dente and piled on a plate.) The critic for the New Republic was not alone in saying that he didn’t like Gehry’s Ike; he described it as a “bombastic and silly” exercise that tourists might easily mistake for “a spectacularly misconceived tribute to Huckleberry Finn.”

Assuming it is built as proposed, the Ike memorial promises to be merely the latest in what is a lengthening list of dud monuments and memorials on and near the Mall. Consider the National World War II Memorial that now occupies a central place on the Mall; it recalls Albert Speer, being not only bad architecture but bad history. (FDR’s Anglophilia and Americans’ anti-Japanese racism were the two main motives to fight, not any desire to make Europe free.) Then there is the Franklin Delano Roosevelt Memorial on the west side of the basin. While it has its fans (wrote one visitor, “This is a very nice place to go... it eats up a good bit of time and is very interesting”), to me it looks like a bastard child of Stonehenge, out of PowerPoint.

In the Ike and FDR works, contemporary architects created modern-ish symbolic space as a metaphorically enlarged setting for old-fashioned representational statuary of a distinctly unheroic kind. This is arguably appropriate, even unavoidable in the case of the wheelchair-bound FDR and Ike the military diplomat.

Americans however like to see their heroes being heroic. Recall what happened when Maya Lin’s fine Vietnam Veterans Memorial Wall was unveiled in 1982. Like the war it recalls, her polished stone wall engraved with names left many Americans confused. Veterans of that fiasco and their families wanted them to be depicted as heroes, not victims, so there was added to the wall three bronze GI Joes, each shown with kit specific to their service and mission. (The Marine, for example, packs an exact replica of a Colt m1911a1 pistol.) The statues come across, as most do, not as a celebration of courage but a celebration of hunks at war.

The Illinois equivalent of the Mall in D.C. is the Statehouse grounds in Springfield. The newest statues are group memorials that may be seen as war memorials of a sort, as all commemorate Illinoisans hurt or killed while trying to make a living. John Szaton’s coal miner may look the picture of health but in fact he was meant to represent the more than 9,000 Illinois miners who died in the 82 years previous to the statue’s dedication in 1964. The Illinois Workers Memorial consists of three human figures representing “workers affected by workplace deaths and injuries.” On the other side of the Capitol are similar statues commemorating Illinois police officers and firefighters killed or hurt in the line of duty.

Given their subjects, these works should be moving. They are not. Crude modeling and stilted poses have been put in the service of mawkish sentimentality. “Coal Miner” wants us to remember miners as heroes – the work would not look out of place in Stalinist Moscow, so faithfully does it draw on the socialist realism of the 1920s and ’30s depicting the Worker as Superman – but surely we would appreciate them more were we to be reminded that digging coal left many thousands of men bent and gasping for air. The firefighters clamor over a chimney in a tableaux one might find on a shelf in a kid’s bedroom, made of Legos and action figures; it suggests not that firefighting is dangerous, but that it’s fun.

Readers, still your angry pens. I am not sneering at heroes. I am sneering at lame depictions of heroism. Nor am I complaining about representational art, or traditional monuments. I am complaining about the lack of imagination in the service of the traditional that these works represent. “A culture will be judged by its statues,” wrote Andre Malraux. So will a state government. Whether sculptors still exist who are capable of giving us a new Lincoln Memorial is a question I am not competent to answer. It seems plain enough, however, that the officials responsible for the Statehouse grounds ought to try harder to find them.

Reader Patrick Provart of Springfield notes that I goofed in my column about the proposed downtown transit center (“All aboard,” March 29). Amtrak service between Champaign-Urbana and Indianapolis is via a thruway bus, not a train.