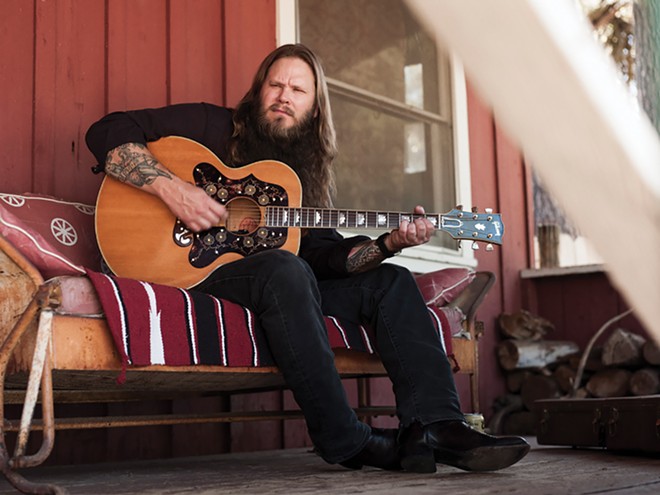 Whitey Morgan plays the Grand Central Stage this Saturday at 7 p.m. at the Illinois State Fair.

Here we go again into the wondrous world of the Illinois State Fair. If there's another singular annual event that impacts Springfield and surrounding areas more, I am at a loss to even venture a guess as to what it could be. From temporary one-way roads to parking in yards, late night action to early morning starts, hotels full of visitors and hometown folks that leave town, and much more, our fair city is transformed into a "fair city" practically overnight. And since not a little of the change comes in the form of live music, let's go discover what's out there. Fair enough?

After a look at the Grandstand lineup, it would be fair to say that it's really quite good in many ways. They've booked a variety of acts, from cultural icon Willie Nelson (I can proudly say the last time Willie was at the grandstand in 2001, some guy named Tom Irwin and his Hired Hands opened for him) to comedian and host of "The Daily Show," Trevor Noah. There are plenty of top music stars from the past, present and likely the future too, plus interestingly enough, I spy some acts who have Land of Lincoln connections. The band Disturbed began in Chicago in 1994 and went on to huge success; the opening act for Brooks & Dunn, Kendell Marvel, hails from Southern Illinois; and The Ides of March, with founder Jim Peterik, got their start in Berwyn before scoring a national hit in 1970, then afterwards Peterik took off with his new band, Survivor. That's all pretty cool and some new information to me. I hope you take a look-see and see what looks good to you.

As far as non-Grandstand live music goes during the fair, you've got options, as they say. From the Village of Cultures (formerly Ethnic Village) to the Wine Fair in the Artisan's Building, on to the several beer tents and pop-up stages around the grounds, along with the venerable Lincoln Stage and also a new (or fairly new) stage inside the Expo Building, plus the Grand Central Stage at the south end of the Reisch Pavilion (old Food-a-rama) hosting some national touring acts and locals, if you can't find live music, I am afraid that's your problem. It will more than likely find you, if you keep your ears open and your eyes peeled.

Along with all the activity going on around the fairgrounds proper, it's fairly obvious the rest of the city has a fair amount of action happening as well. Some regularly scheduled programming continues, such as Friday Night Jazz at Boones (Victoria Capo Trio this Friday, Jay Ferguson Trio the next) and the Artist on the Plaza performances, Fridays at noon on the south side of the Old State Capitol Plaza (Messengers for Christ this Friday and Amy Benton the next). Other places do special events for the occasion, including the Curve Inn's annual tradition of hosting the South Side Fair, where several popular local cover bands hit the stage nightly, accompanied by fair-style eats and libations, including those ubiquitous corn dogs and doubly delicious vodka-infused, lemonade shake-ups.

On top of all that, please be aware that the nomination voting for our Best of Springfield, sponsored by your favorite newsweekly, Illinois Times, opens this Thursday, Aug. 11 (along with the state fair) and closes on Tuesday, Aug. 22 (two days after the fair is over).Now go have some fun at the fair, and be sure to check our listings for all the other fine music going on. Fare thee well for this week.